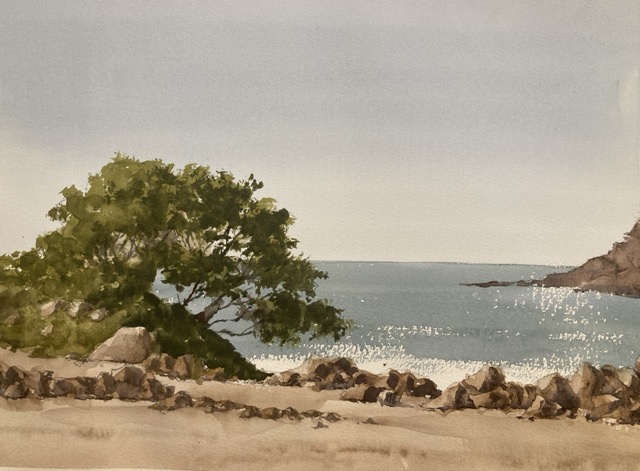 A deceptively simple watercolor landscape value study was the precursor to this painting. Tuesday is teaching day so decisions had to be made and I plumped for this beach scene. It’s good for practice as there are obvious large shapes and clear values.

The first thing was to break down the scene into a few large value shapes. These were the sky, the sand, the sea, the trees, and the rocks. A couple of these have multiple values in but I chose the average value in order to paint the study.

Sketch the shapes and identify the values

This is probably the most important part of the value study and it involves no painting at all! First I sketched the rough shapes in a small rectangle – probably about 4”x6”. Then Using my trusty Paul Centore value scale I first *estimated* what the value was for each shape. After taking a stab at the value I then brought in the value scale to check how close I was. If I’m within a step I’m pretty happy. It’s surprising how quickly you get better at this and the key to it is making a guess first rather than bringing in the scale immediately.

Note the values on the sketch

This is only a value study so we can mark it up however we want. I pencil in the value inside the shape so I can remember. So the sky and the sand were about a value 8. The sea was a 6 and the trees and rocks varied between a 5 and a 2. All these numbers went in the sketch.

And now we get to paint something. We’ve done a lot of the hard work here so it’s a case of mixing the value and painting it in the shape. I try and keep the value washes as even as possible so there aren’t stripes or brush marks. It keeps the values separated so we can judge how the composition is working. I usually do value studies in a sketchbook or on cheap student paper but this time I broke out the Fabriano Artistico. It’s not really needed as we’re not doing any edge work or blending but I had a small piece handy.

Some shapes have multiple values

The trees and the rocks have multiple values which show the form as the light hits them. In these shapes I used two values – a wash of the lighter value and then a much darker value on the shadow side to make them appear three dimensional.

There’s not a lot of detail in there. A few brush marks on the rocks brings everything together.

After I was done I stood back and assessed how the composition was working. In this case everything looked good. The value arrangement hung together and I was ready to go to the next stage. In particular I liked the way the sea was a mid value between the sky and the darks of the trees and rocks and tied the painting together. Another thing that I think worked well was the broad treatment of the rocks. I had used just two values and put in the shadows very broadly with a little softening of the edges. This simple treatment was surprisingly enough to make the rocks read well. Also the broad painting gives the study some energy and visual life.

In another post I’ll talk through the next stage which is mixing the colors. There are a couple of surprises in there which can catch you out. I have been caught unawares painting beach scenes quite recently and learned a few lessons which came in handy with this painting. 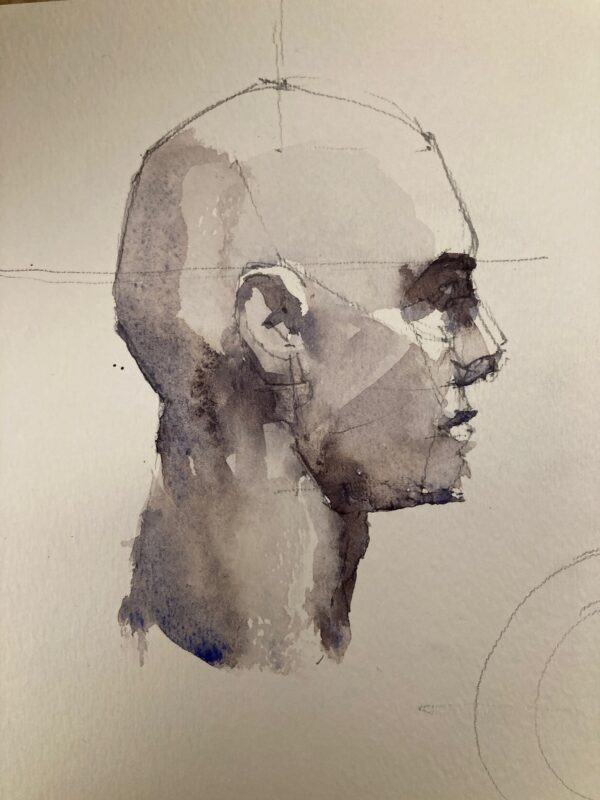 It’s been a while since I’ve done any portrait painting. Getting warmed up by doing some Asarohead practice. Very useful to have the planes clearly shown. A bit like painting a very complicated cube.

There’s a great online 3D head by William Nguyen at Artstation. It’s not an exact Asaro head but has the main planes and is very similar. You can rotate it using the mouse and the lighting moves around the head so you can pause the video at the exact pose and lighting setup you need. 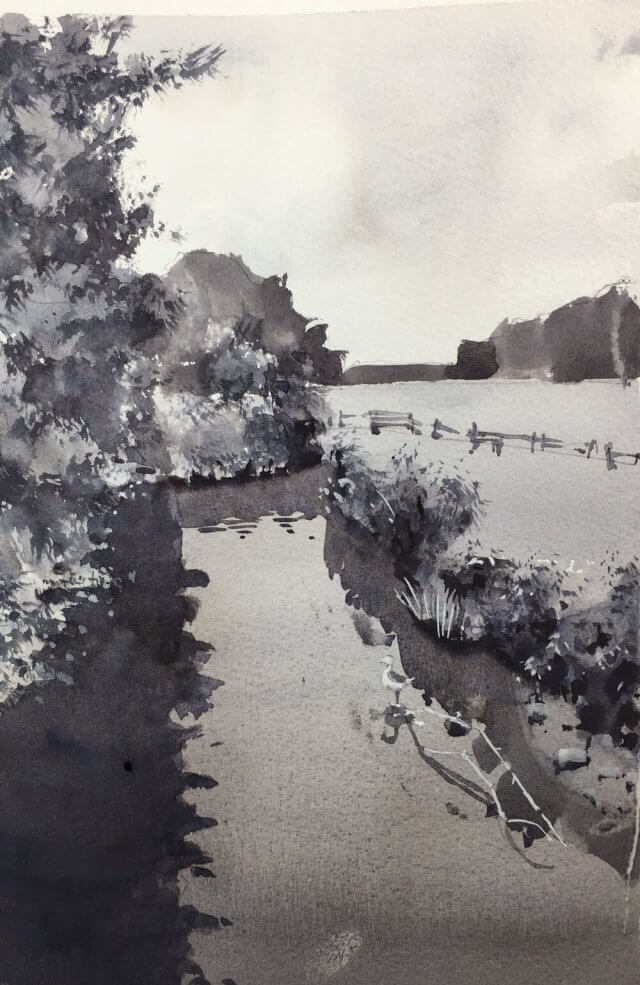 I’m continuing with value studies from my lucky dip photo bag. This one I applied my simplifying technique of stripping everything back to a few value shapes and finally a single detail shape with the bulk of the contrast. This detail shape can be a pretty odd shape and, in this scene, includes the foreground trees as well as the bushes on the other side of the bank. They’re contiguous in 2d if not in 3d.

I think this worked out quite well. It’s not meant to be a finished painting but I think I could work this one up if I wanted to. Onwards! 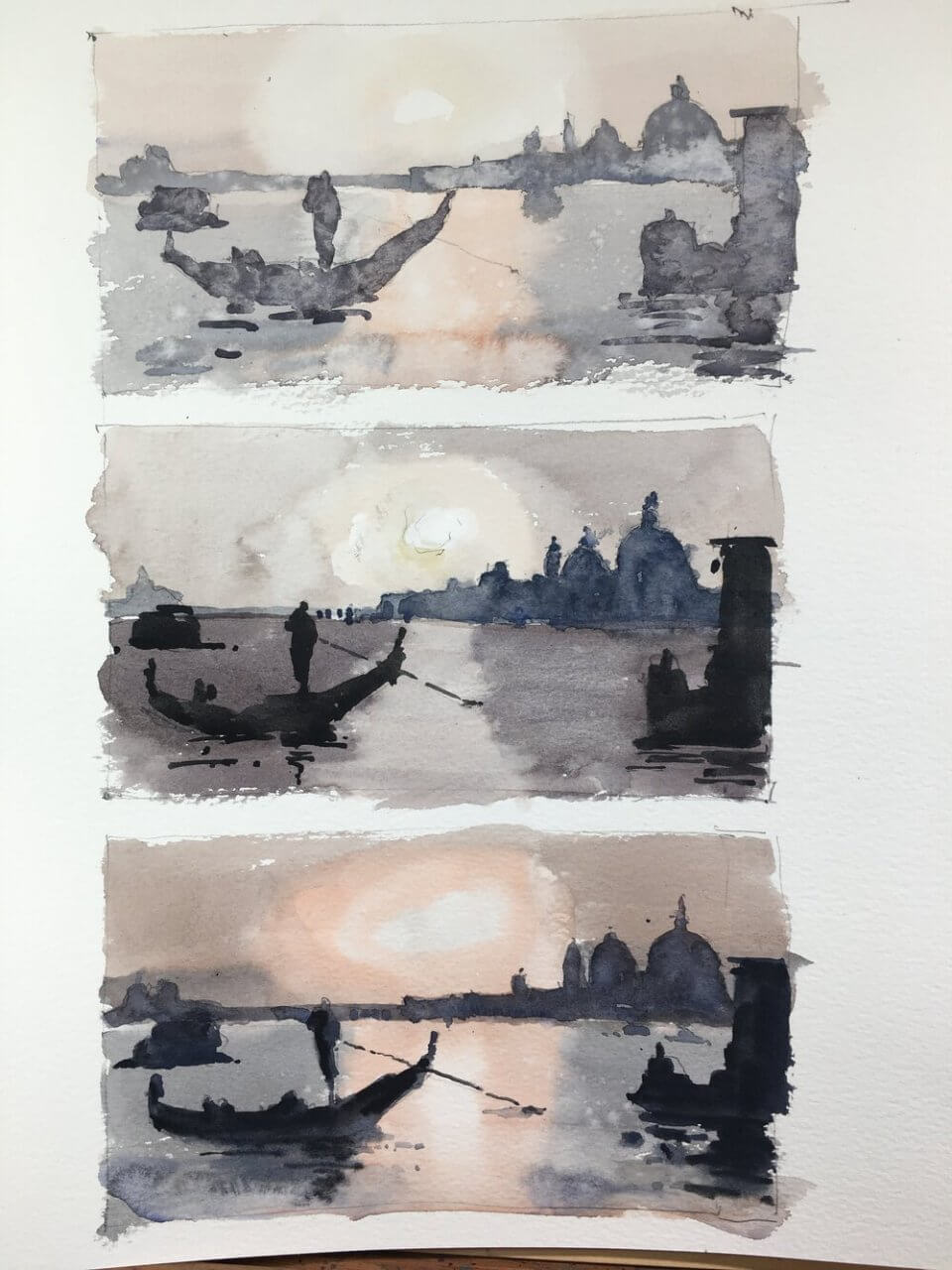 Change the values but keep the value relationships

The first goal with these studies was to see whether we could shift the values but still keep the value relationships. If the relationships are good then the scene will read correctly. And I think they all do. None of them are great paintings but you can see they all represent the same thing.

Shift the values to change the atmosphere

The second goal was to change the feel of a painting by shifting the values. I thought the lighter one might have a more misty, ethereal feel. And the darker one would be more moody. Well I don’t think I succeeded here. Maybe I’m over simplifying the process. But it definitely an exercise worth doing.

Some days nothing really works

Wasn’t really feeling it for this one. Let’s hope I can pull something out of the bag for tomorrow’s class. In any case it was good practice for value studies. I’ve also included a larger version below. Again I’m not really happy with it – just one of those days I suppose.

A lot of you will know of Joseph Zbukvic. His value handling (amongst many other things) is spectacular.

Yes well we’re all depressed now aren’t we? He actually uses quite a narrow range of values here but expertly implemented.