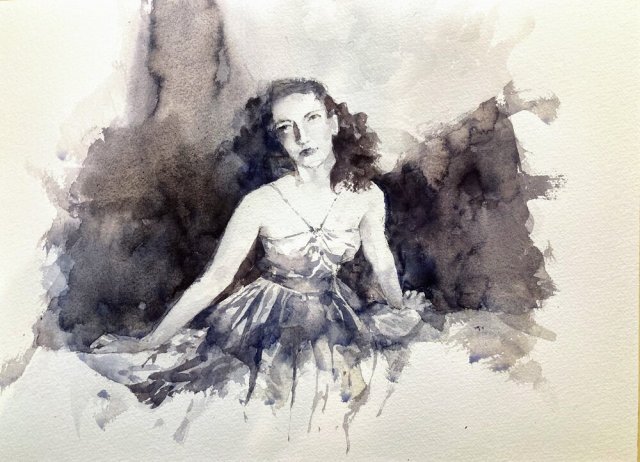 I’ve been rooting around for something that really tickles my fancy to get me back into painting again. One of my Christmas presents was Andrew Loomis’ Creative Illustration book which has a lot of top notch painting advice and I highly recommend. One of his example paintings is of the lovely lady above and, as I haven’t done much figure work recently, I thought I’d have a go.

She’s done entirely in a combination of ultramarine and burnt sienna. I wanted to try and combine the granularity and washiness of the watercolor with the subtle range of tones in the flesh and face. Pretty happy with the result although the facial likeness to the original is not that close.

Here are some intermediates:

Started off with a rough pencil drawing and a fairly light wash to put in the main areas of light and dark. I was careful to not leave hard edges where they would draw attention to themselves but also lose edges where the values were similar.

Next I went in with some darks to define the arms and shoulders and the hair around the face. I put some detail in the face but was careful to keep the values light.

Next was putting some detail in the dress, defining some of the folds but leaving other areas quite in distinct. Some subtle shading for the hands but kept them with low value contrast so they don’t detract from the face. The face went in next and was almost a disaster as I was working quite small here.

The final thing and managed to stop before I ruined it. A little more definition in the face and some more interest in the background to frame the face. A little more detail in the hands and a few tweaks to the dress more to aid the composition than anything. Phew!