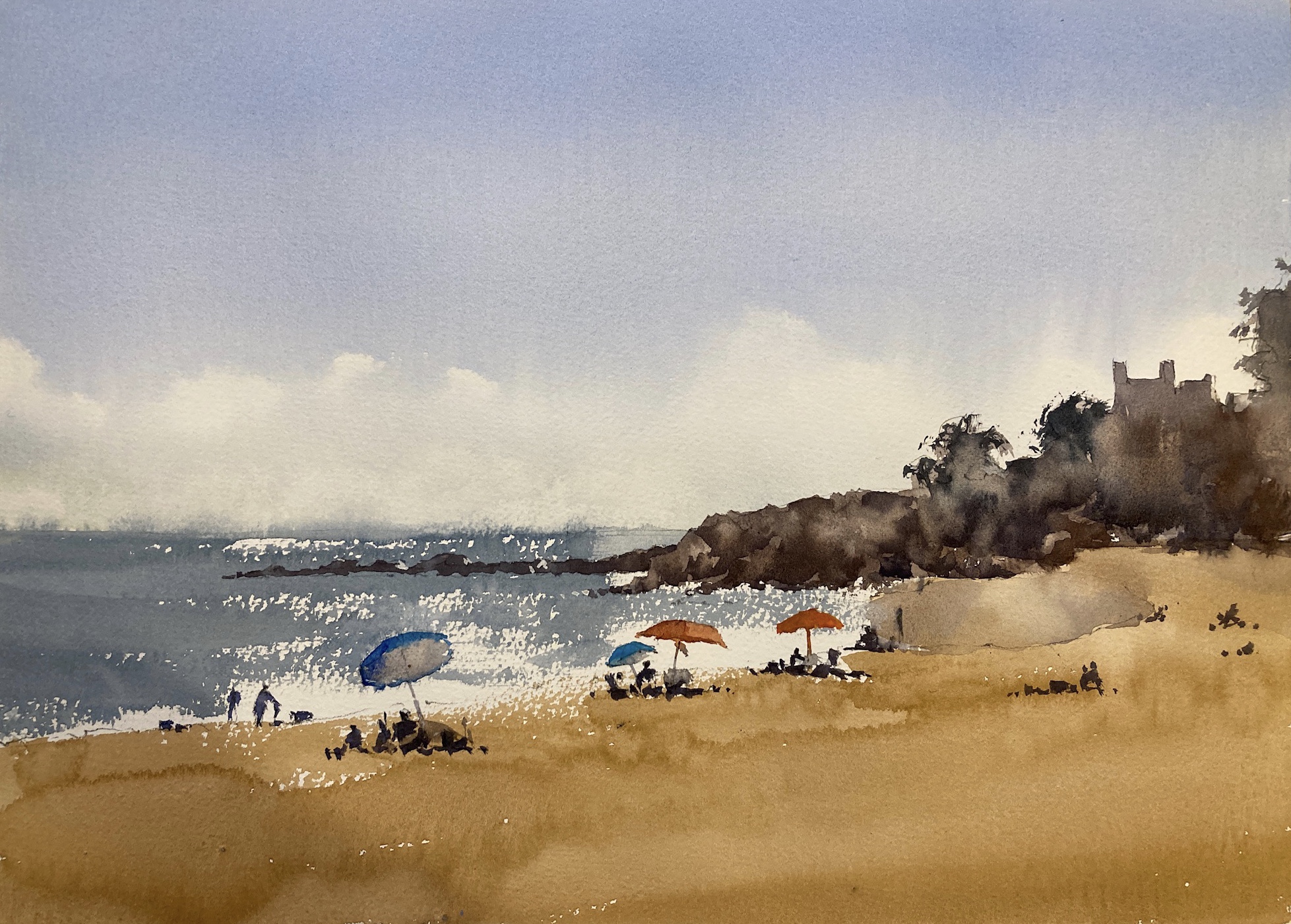 Singing beach watercolor sketch today. Just about an hour and this is a scene I’ve done before but I was never really satisfied. This is getting there but not quite where I want it. 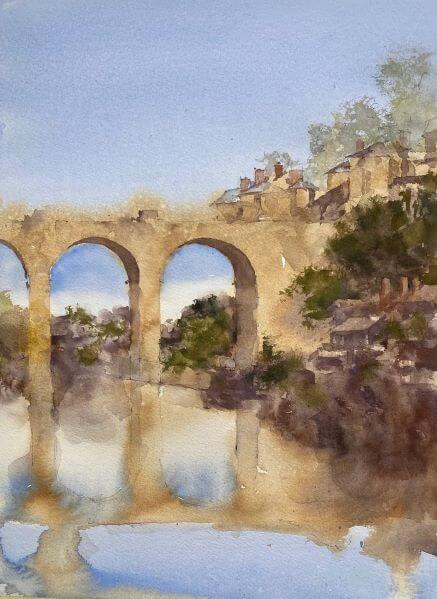 How fast can you paint a watercolor? I had 30 minutes before the Newton Watercolor Society zoom call and a bridge scene to paint. The picture above had about an hour longer but I got a lot of the main areas in in 30 minutes. Brushes were flying and there was no time for detail or hanging about. To be honest it looked pretty good before I started noodling with it. As always the jury is out on this one until later.

But Don’t Forget the Basics

Edit: It’s a day later and I’m still on the fence. The drawing is a little dodgy (make those verticals vertical!) and the value pattern isn’t quite as well defined as I wanted. The color is good – I like the blue of the sky which works well with the sandy brick and the maroonish shadows. I think it needs another attempt.

Scaling Up a Watercolor

I’m thinking it could benefit from being larger. The composition is strong – hard not to be with that bridge. I struggle with larger paintings but no time like the present to get better. I find scaling up watercolors hard. Watercolor on paper behaves the same whether you’re working large or small. It blends and spreads on the paper similarly whether you’re on a 5×7 or a 22×30. Just using a bigger brush (although it helps) doesn’t make the paint behave differently.

This is 16″x20″ which doesn’t sound that much large but I had to work a lot more interest into the paint than I would have done at a smaller size. I kind of like it but it’s not one of my favorites. Looks good on the wall though.

Due to time constraints I didn’t video this painting. However if anyone is interested in my process I have a number of real-time demo landscape videos on my youtube channel. A nice example is this one of a late afternoon English cornfield after harvest. 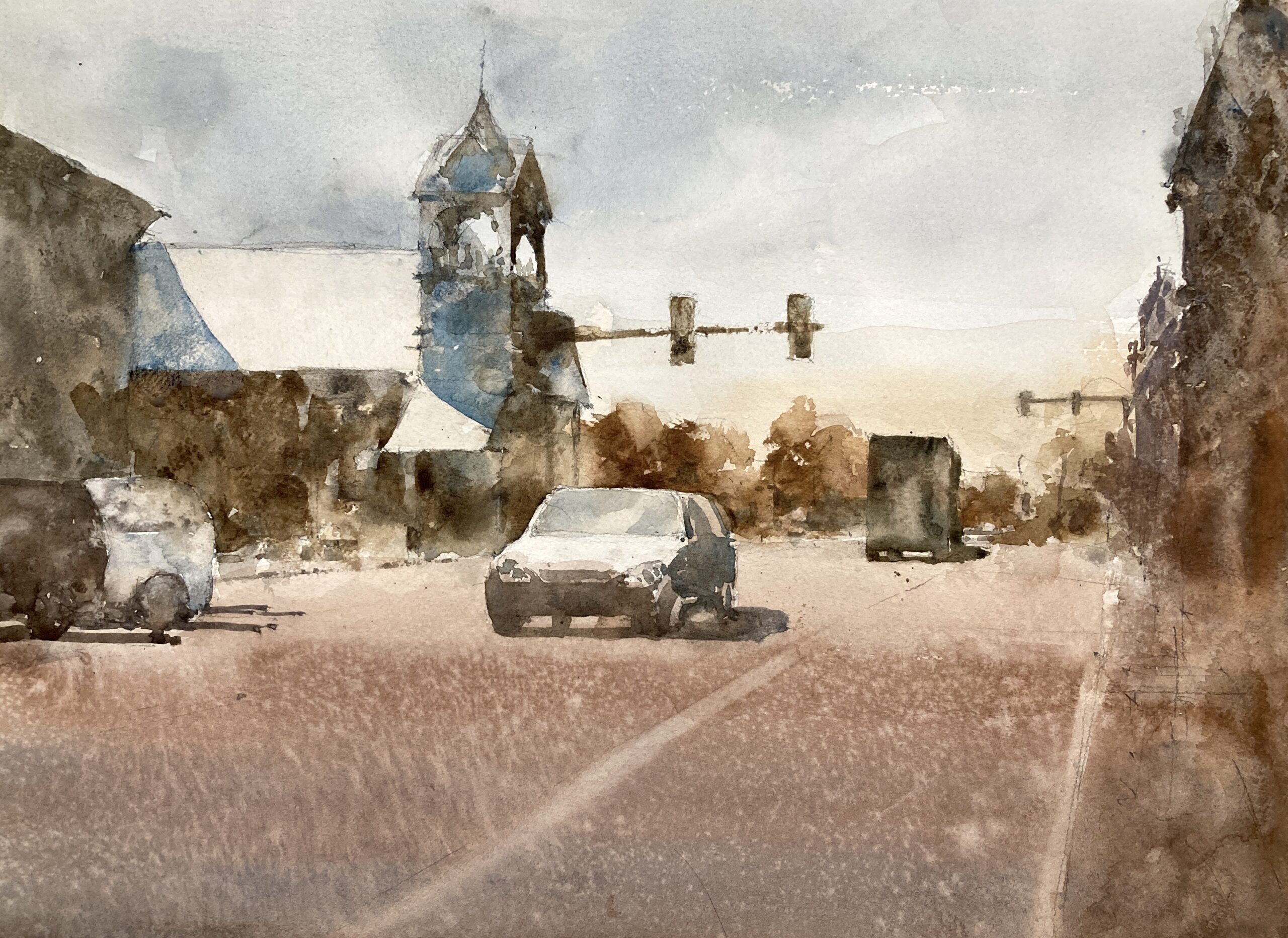 Enough with the apples. Let’s get back to some watercolor. I’m really enjoying the street scenes recently. They need a lot of tweaking to design them into something that works. But you also have to keep the sense of place in there. And also make a decent painting out of them. It’s tricky – but rewarding.

So this is the reference image

The tower is great of course. But there’s a lot of space in there not doing a whole lot. I toyed with keeping this in – maybe a wider format – and making it more of the subject. But after noodling with some value studies in paint and on the ipad I plumped for compressing the road and keeping the tower and the car as central. Of prime importance are the light roofs leading down to the car. Great arrangement of darks and lights.

Those three lights and the car on the left hand side hold everything together. Well that’s the plan. The initial washes went in ok. Some light and dark but I’ve still got half the value scale to play with so a long way to go.

Well here he is finished. I managed to screw up at the last minute (not telling where) but on the whole I’m pretty happy with this. Time will tell of course.

The rose study didn’t take as long as I though so time for another. quite loose this one and I always enjoy all the gubbins to do with boats.

This is much more complicated than it looks. I had a great time with all that foreground texture but I’m in two minds as to whether I’m happy. Still not sure that the colors are muted enough. Time will tell.