Well this was fun. I learned a lot here. The subject was a lime wedge against different colored backgrounds. In the end I used pretty much the same colors for the wedge itself but the background (obviously) and the foreground and reflection changed color. In particular that reflection, even though it looks yellow/orange is in real life a pure grey. Who’d have thought? In hindsight I should have known as a yellow reflection on a gray background will result in a neutral gray!

Here’s a closeup of the result

Now this didn’t come out quite how I imagined. I knew it was going to be a struggle and definitely turned out that way. As usual I’m in two minds. I think I like it but let’s see what tomorrow brings.

Although everything came out ok in the end I made the classic mistake of being overconfident going into this. As it is a study I was concentrating hard on getting the colors and values as close as I could (apart from some of the grey shadows which were too drab) and I almost lost my way. Lesson learned – never let down your guard or watercolor will bite you.

Here is the original photo. 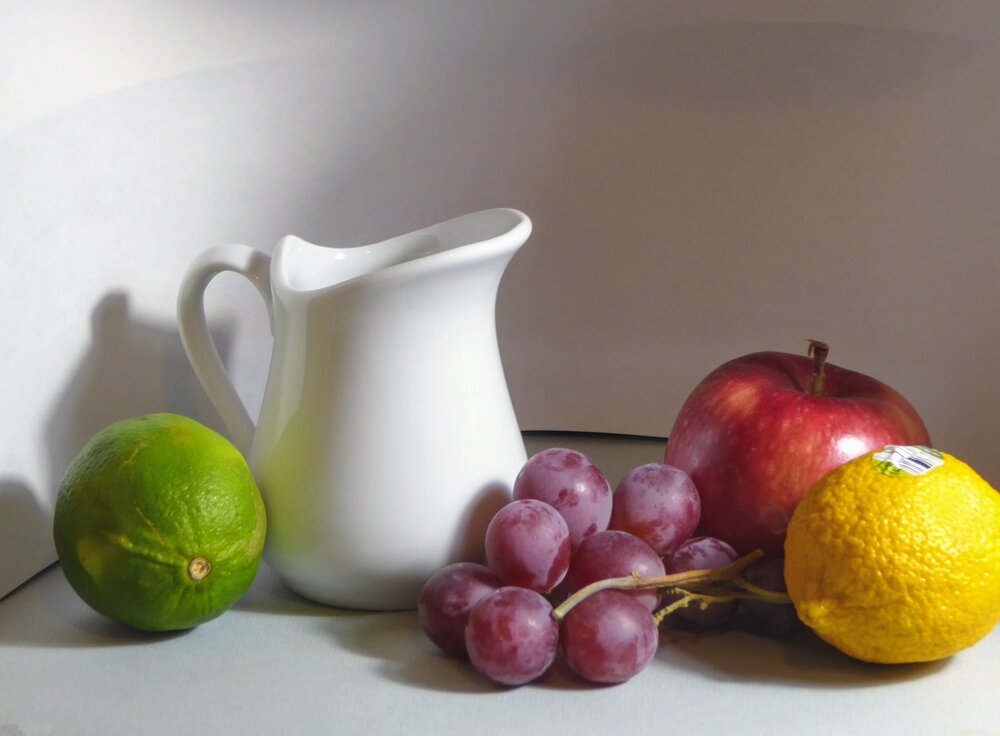 And finally I made a video of the painting process for those interested.

In progress using a wonderful photo from


facebook page. Not sure how this will end up yet.

I’m off to a rose painting workshop next weekend with
Kathleen Speranza
. This will be in oils and I’ve done precisely one oil painting in my life previously. So obviously I need to at least come prepared with some idea of what to do.

Armed with my new grey-backed glass palette I ventured in with the palette knife and first tried mixing up some neutral value strings. Harder than it looks and boy does this paint need a lot of mixing. Next up was trying out my trusty fruit arrangement and trying to hit all the colors of the fruits on the light and shadow side. This was a little easier than in watercolor as I can see the final color on the palette in oil. 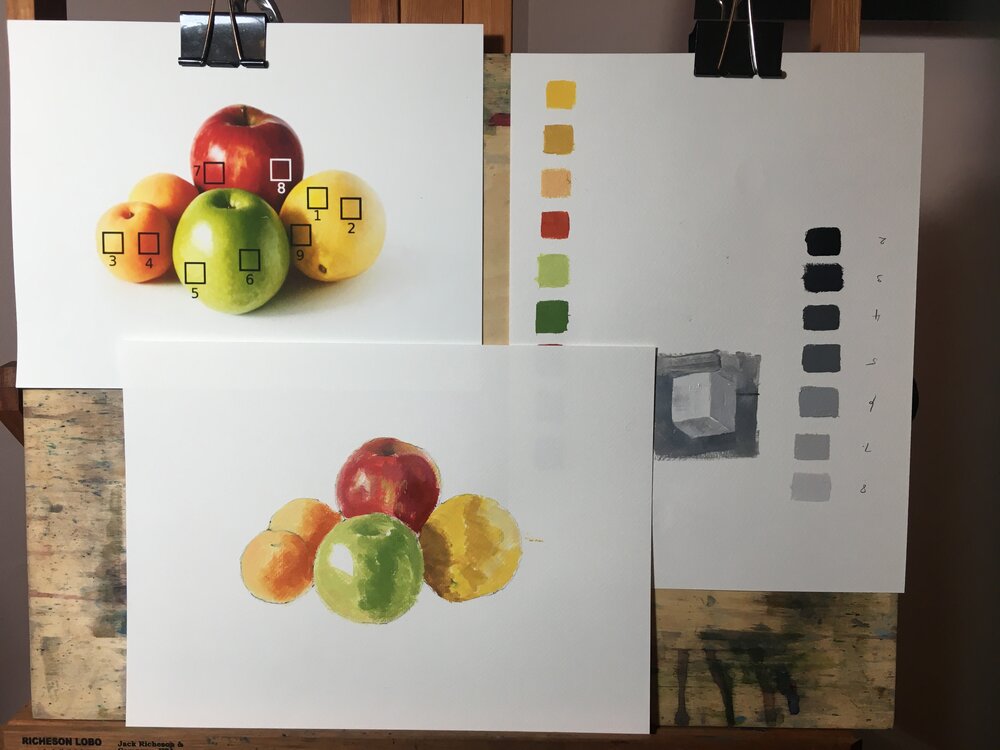 I tried a quick white cube with the neutral values but then thought ‘to hell with it’ and went in with the full fruit picture. Having spent the time mixing the colors beforehand things went a lot better than I had predicted. It really helped already knowing how the colors mix from the watercolor painting and I was fairly happy at this stage.

After leaving things overnight I went back in with the darkest darks and did a bit of edge smoothing (still need to get to grips with this properly). I was pretty chuffed with the final image. Flowers, of course, are a whole different kettle of fish.

As it was still early and I had a fistful of reference photos I thought I’d have another go at a fruit still life. I haven’t done one of these in a long time and I was interested to see if I could still remember how to do things.

First the photo. A little more complicated than the previous one and I’ve always dreaded doing grapes.

Drawing and first washes in. Not particularly confident at this point and I’d been a little tentative with the first washes so everything’s looking a bit washed out. 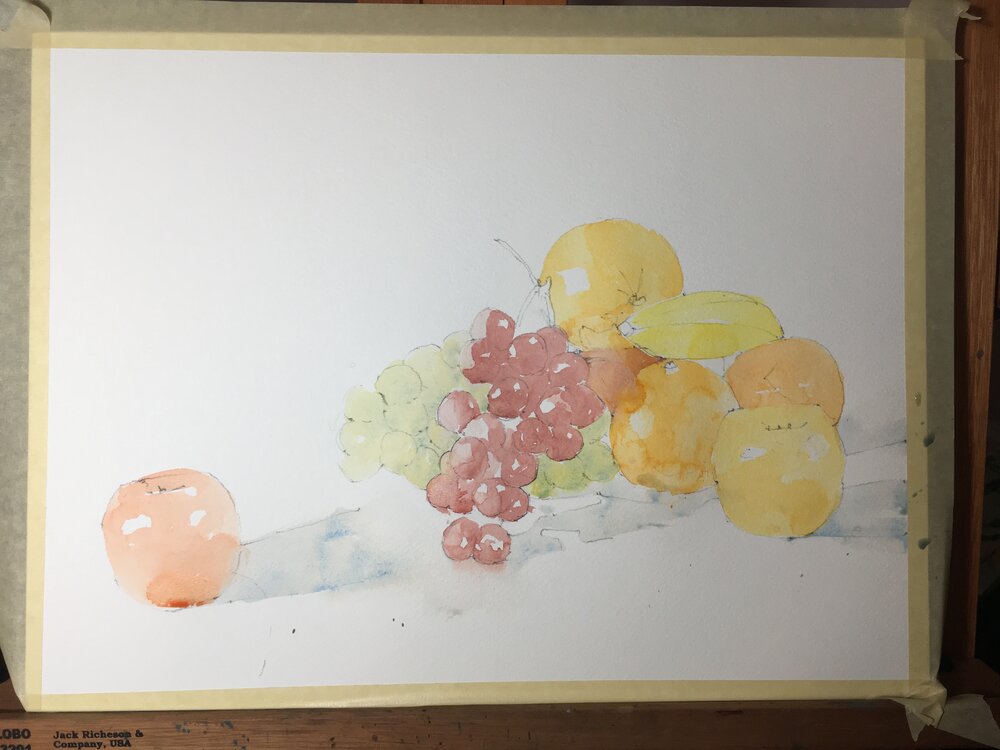 Next stage and things are looking a little better. Still not really very confident but at least the grapes aren’t giving me as much trouble as I’d thought.

Final version. To be honest I quit while I was ahead here. I could have gone back in and darkened up some of the grapes but felt the risk of ruining it was too great. Pretty happy with this to be honest.

And of course an easel shot. 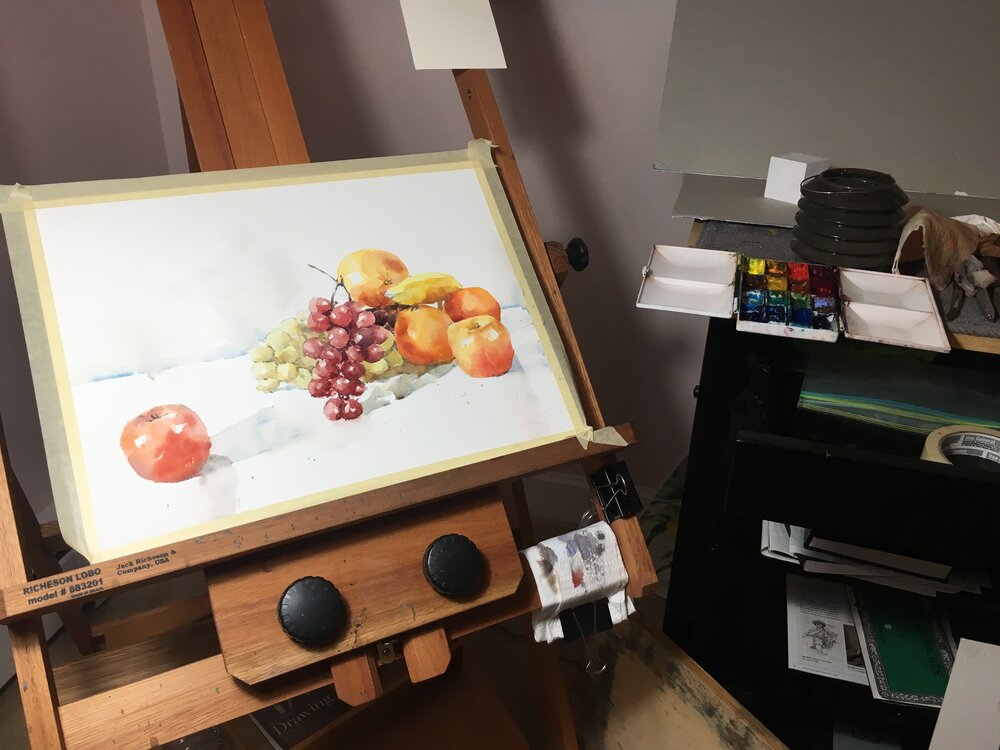 I’m starting teaching on October 21st so I’ve been thinking about lesson plans and the like. I thought we’d start off with something simple to get people used to handling the paint and mixing colors.

I thought this would be much more straightforward than it was. Turns out that when you’re trying to think through what you’re going to say and paint at the same time everything gets more complicated. Added to that is that I was trying not to paint on automatic but only do things that I could clearly articulate. Easier said than done.

So here was the initial photo : 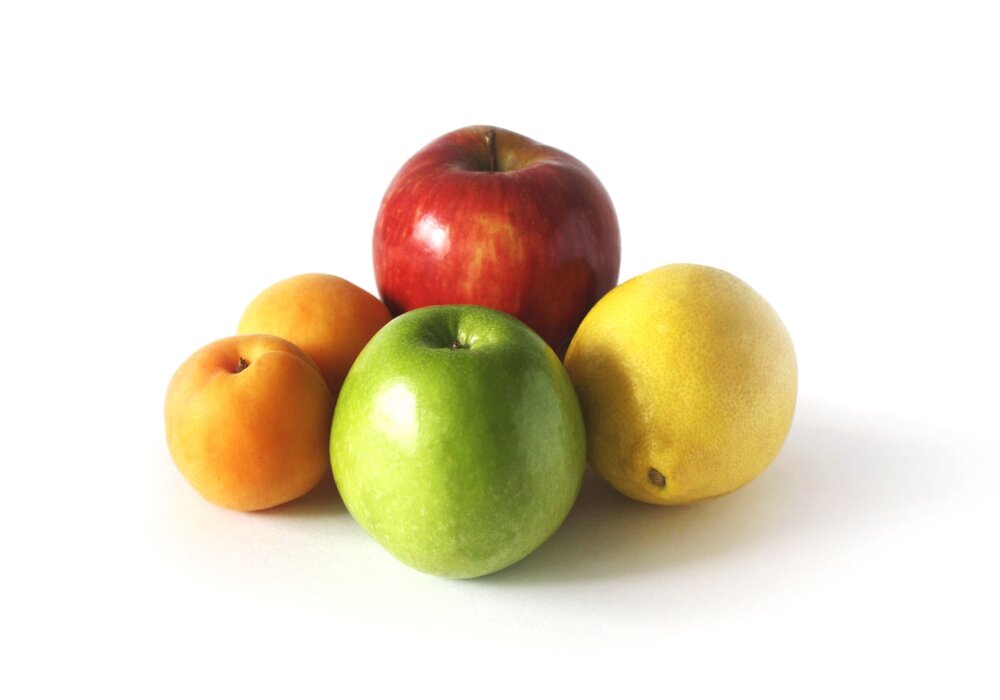 Drawing is fairly straightforward I hope. Concentrating on angles and junctions and negative spaces. I marked in the shadow areas and highlights more than I usually would for emphasis. 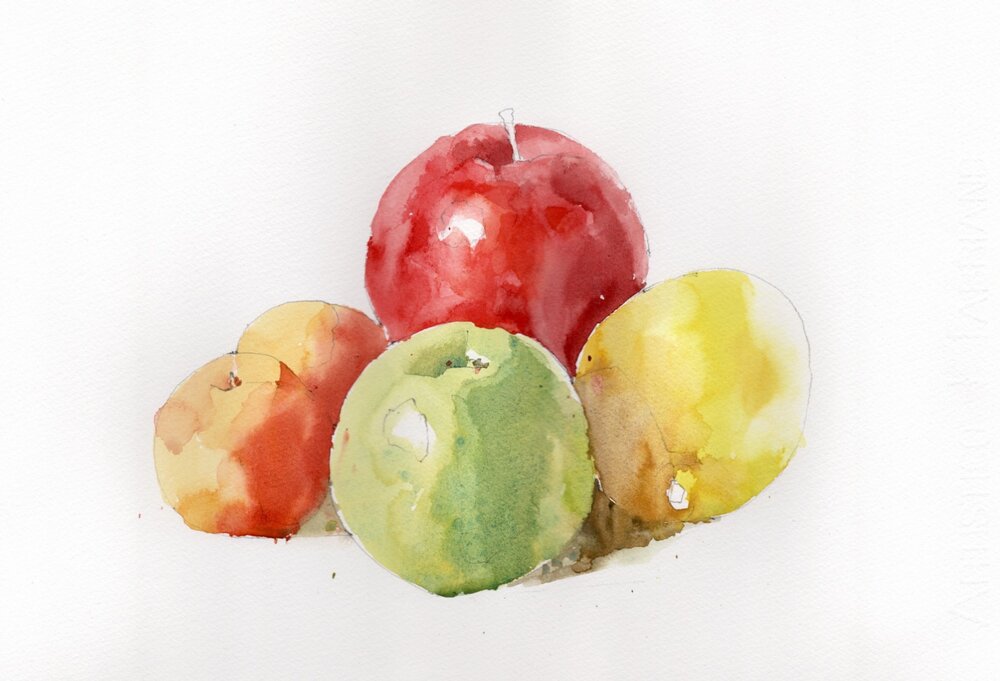 First layer with the midtones and some darks. My shadow on the lemon fell off but that’s ok.

final image with the darkest darks put in and some details in the stalks. I hope this isn’t either too simple or too complicated for people to follow along with.

And a nice easel shot. Always good to have one of those.

Not as loose as my usual style.   Definitely feeling my way through this one. 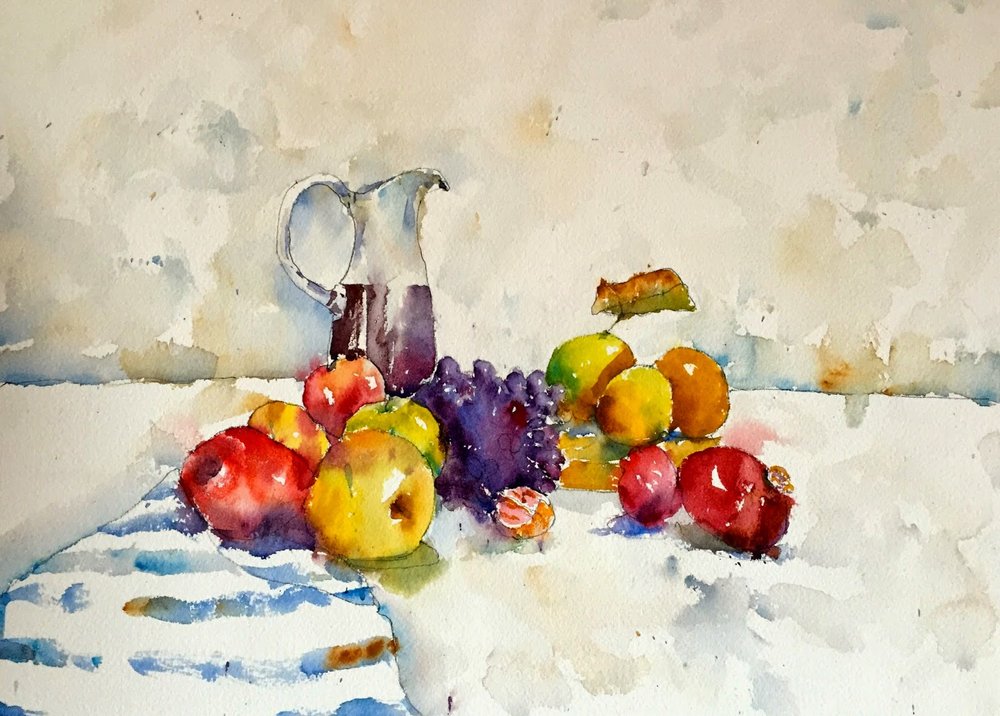 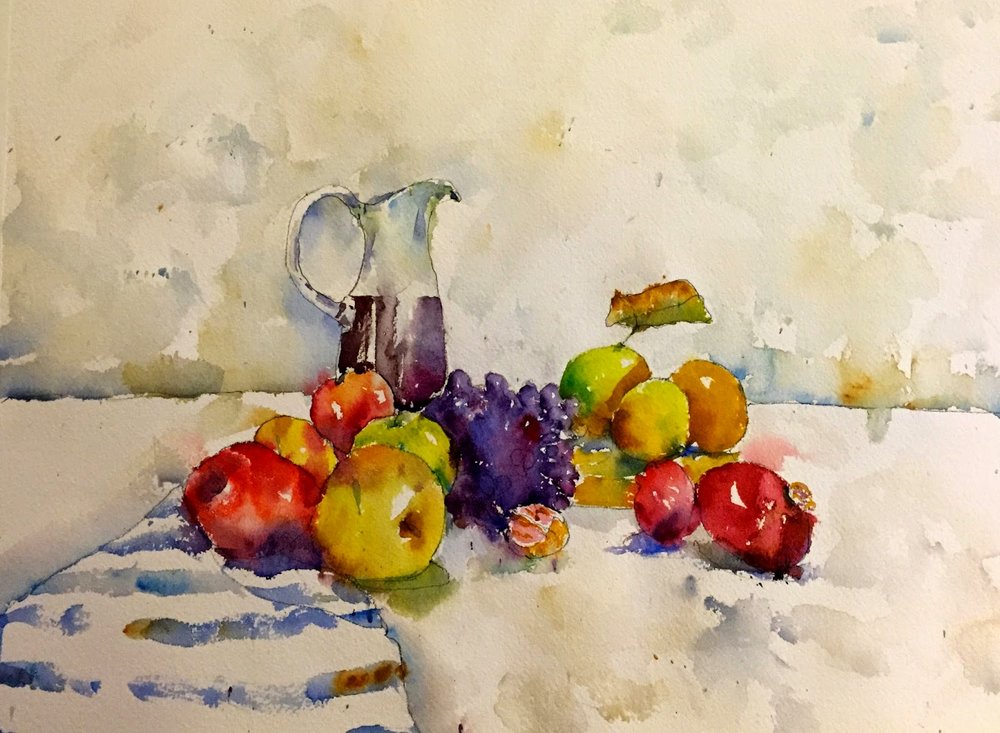 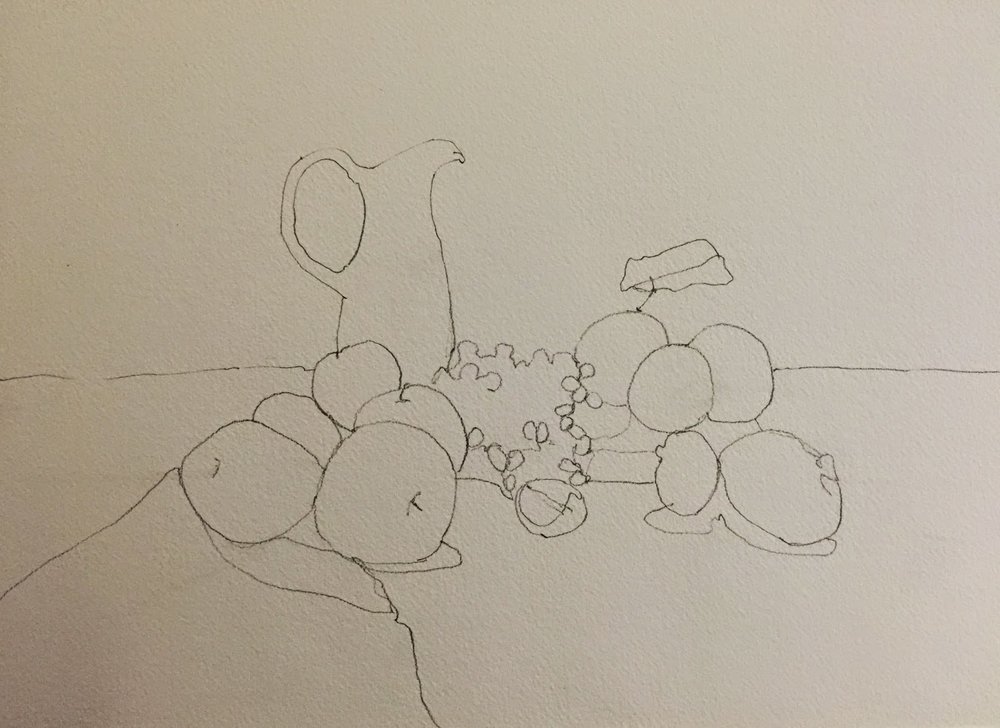 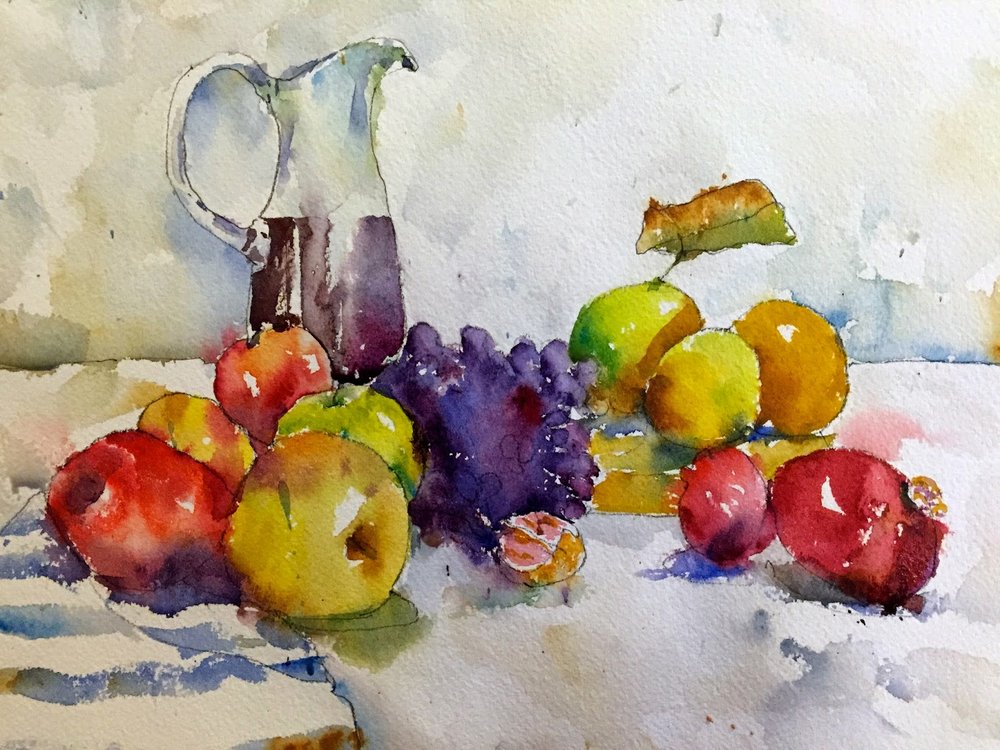 A closer crop of the finish.   Can’t decide whether to keep this as the ‘finished’ version or the top one.