Let’s paint an owl I said. I love painting owls I said. They’re really fun! Oh boy, oh boy what a toughie. I’d forgotten how hard all those delicate markings were and this almost ended up in the bin. But I continued on he finally came together. A few fixes needed tomorrow but not too shabby overall.

A few years ago I sold a lovely painting of 5 puffins and, to be honest, I’ve never managed to quite capture again the looseness and lightness of touch with this subject. So today was the day to kill this once and for all.

For me this was quite a long painting. Even though the style is loose and sploshy it was very carefully planned and painted in several layers. I think I’m happy although I could possibly pushed it a little more to the sploshy side.

Here we go with the stages:

First stage after the drawing was to put light washes of color roughly where the darks and colors were going to go. I’m pushing through the edges as much as possible just being careful to keep away from areas of detail like the faces. Blossoms, drips and sploshes are welcomes at this stage. It will al add interest to the final painting.

Next layer is to start just indicating some of the darks and bringing some of the edges in. Nothing too defined at this point so we can keep that lovely shimmering image.

We’re sharpening up the image here. Going darker where it needs it on the black parts of the birds and being quite crisp on the face and beak.

The final thing. I beefed up the background a little to bring out the whites of the birds but without making it a subject in itself. A few more darks on the black feathers, a little shading on the faces and we’re done!

Time for another heron. These are always popular but they are very tricky to do and never seem to get easier. Very happy with this one right now. Some nice detail in the feathers and the background brings out the lighter colors without overwhelming the bird. Let’s see if it still passes muster tomorrow morning.

If it does there’s also video which I’ll upload later.

The more I looked at yesterday’s effort the more I was unhappy with it. So back to the drawing board today to see what I could change. The main thing from yesterday was that
HUGE
wing so I did a quick study to see if a modified version would work. 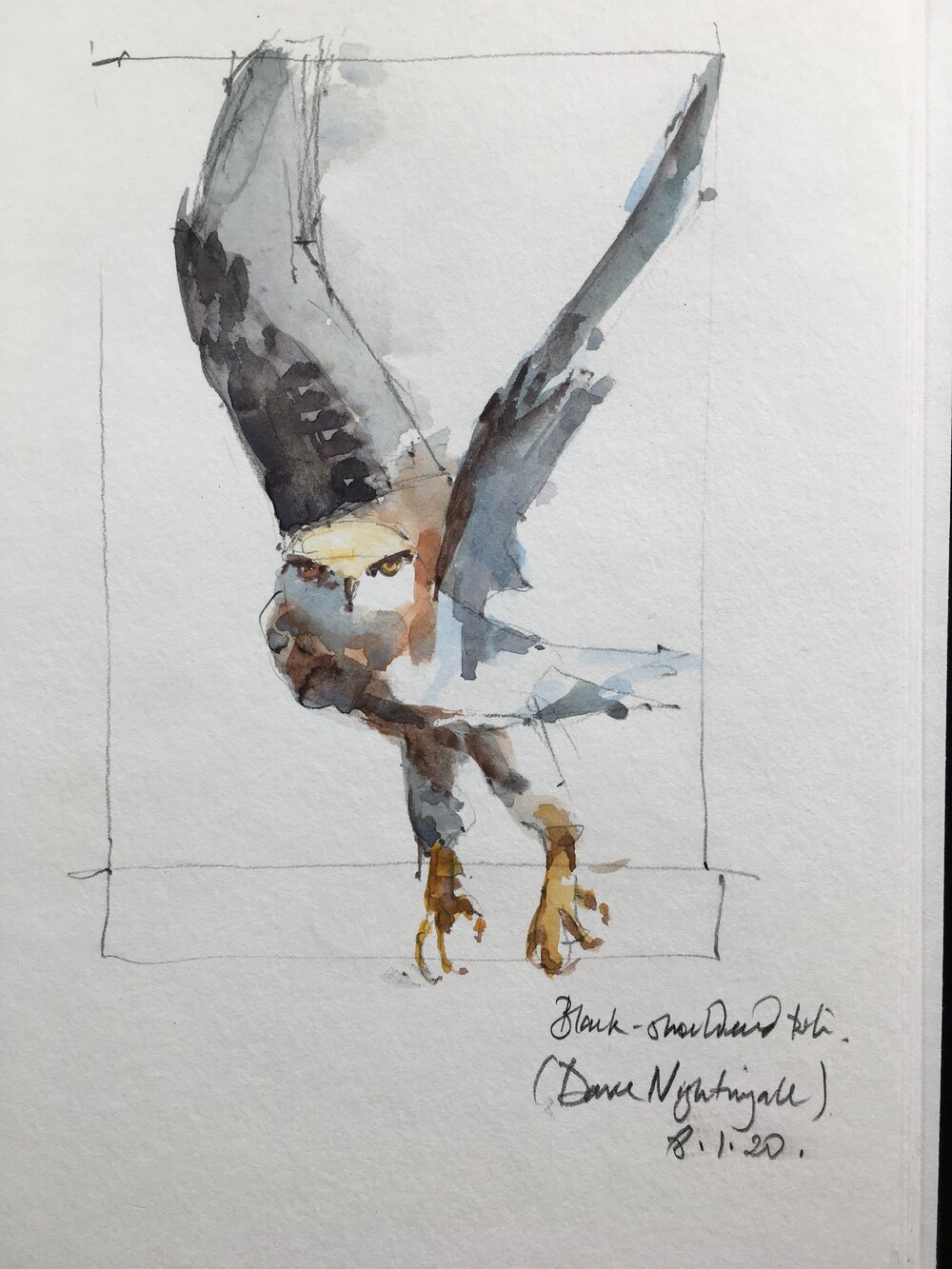 Yup that looks a lot better. I also lightened up the shadow areas and loosened up the brushwork on the wings to keep the focus on the head. Much happier this time round.

Not particularly pleased with this. It came out a little dull which certainly wasn’t the intention. It will have to do though and it may grow on me.

So here he is finished. James thinks he looks lovely but I’m not entirely happy. It’s a tough subject though so on the whole it’s good.

Hat tip and thanks to Wendy Sinclair for the photo.

Thought I’d put this here just in case I mess everything up tomorrow. Pretty happy so far. Those feathers are giving me a bit of grief.

After a couple of false starts this heron finally came together. Surprisingly tricky to get the character of the bird with the lovely angled neck and feathered body. Love the loose edges in this which are crucial to getting the right feel.

From a fantastic photo from Dave Nightingale in the Reference Images for Artists facebook page. The photo is almost too good to paint but I wanted to do a very loose bird painting after all the precision painting over the last couple of months.

I wasn’t sure whether it is finished or not. I’m tempted to do more on the wings and more detail in the face but I’ll leave it until tomorrow to decide.