The ever wonderful
Paul Foxton’s Threads
workshop today. And we were doing a Christmas bauble which was insanely hard. Having tried a few baubles last week in watercolor I dug out the oils for this and it definitely made things a little easier.

I’m really starting to enjoy these simple value studies. Although in practice they are quite complicated to do. They don’t turn out to be great watercolors. Paul works in oils so his methodology is somewhat different to what I’m used to. This does shake things up a bit and I have to solve things somewhat differently to my usual working methods. The first couple I did I was a bit dismayed that they came out a little overworked and splotchy and I was working in many more layers that I usually would. As time has gone on I like the effect of all that effort more and more. If the values are right the overall effect outweighs any surface blemishes and the subject matter shines through.

Today was the September online workshop in Paul Foxton’s
Threads
course. Paul is an oil painter and a fabulous teacher and I’ve gained an enormous amount from his teaching and watching him paint. I highly recommend people take a look at his work and what he has to say.

We’ve been doing a lot of value studies but today was a color study. I did a lot of color matching and the Munsell chips were put to good use. I was really quite pleased with the end result. It’s not the style of painting I would usually use but it’s refreshing to do something in a different way. His focus is very much on learning to identify values and colors exactly and to be able to replicate them. IT’s an extremely useful skill to acquire and a great starting point for whatever direction you wish to go in.

This month in
Paul Foxton’s Threads workshop
it was a value study. I didn’treally think this through and started on my normal 11”x14” paper. Far too big!!!! So much paint on that background and to be honest I just gave up at this point and called it done. Was interesting though – it really gets you looking at values and you soon sharpen up and can see really small changes. Maybe gouache next time?

I’m signed up for
Paul Foxton’s
Threads community and we’re tasked with doing daily value exercises. I’m committing to a value sketch every day for two weeks. Here are the first ones. They’re quite challenging to do. I’m trying to get the right value on the first try and simplify the values where possible. 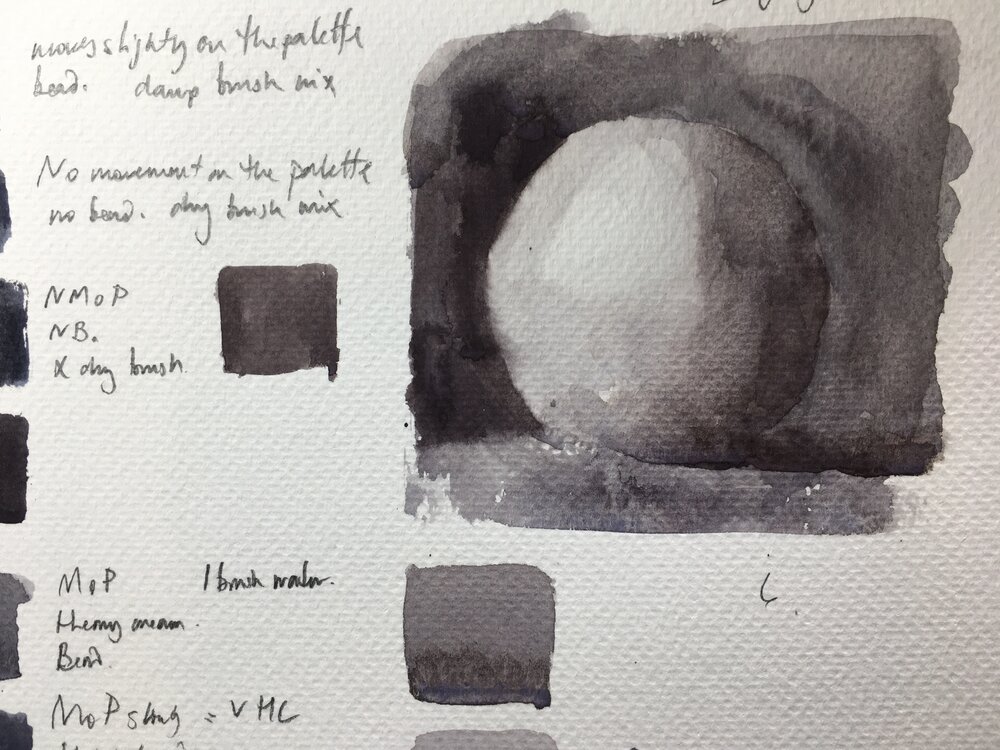 The wonderful
Paul Foxton
is continuing his livestream painting sessions during the corona virus lockdown and I managed to actually catch him live and be organized enough to get the reference photo printed out in readiness.

I think I really quite like this one. It has an ethereal quality to it that I like and considering that daffodils are
really
hard to paint it was pretty successful.

Paul Foxton
is doing daily livestreams of his wonderful flower paintings. I’m popping in now and again to see what he’s up to and painting along when I can. This is today’s effort which is not too shabby.


Paul Foxton
is doing a series of livestream paintalongs on facebook. I always enjoy watching him paint and he’s encouraging us to do our own versions as he paints. Now he paints in oils and I’m doing watercolor which adds a bit of interest to the whole thing. This isn’t really how I like to paint but I entered into the spirit of things and painted as faithfully to the photo as I could. I really like how the flowers came out and parts of the bottle and it was a really useful 90 minutes.

Here’s a closeup of the full thing. 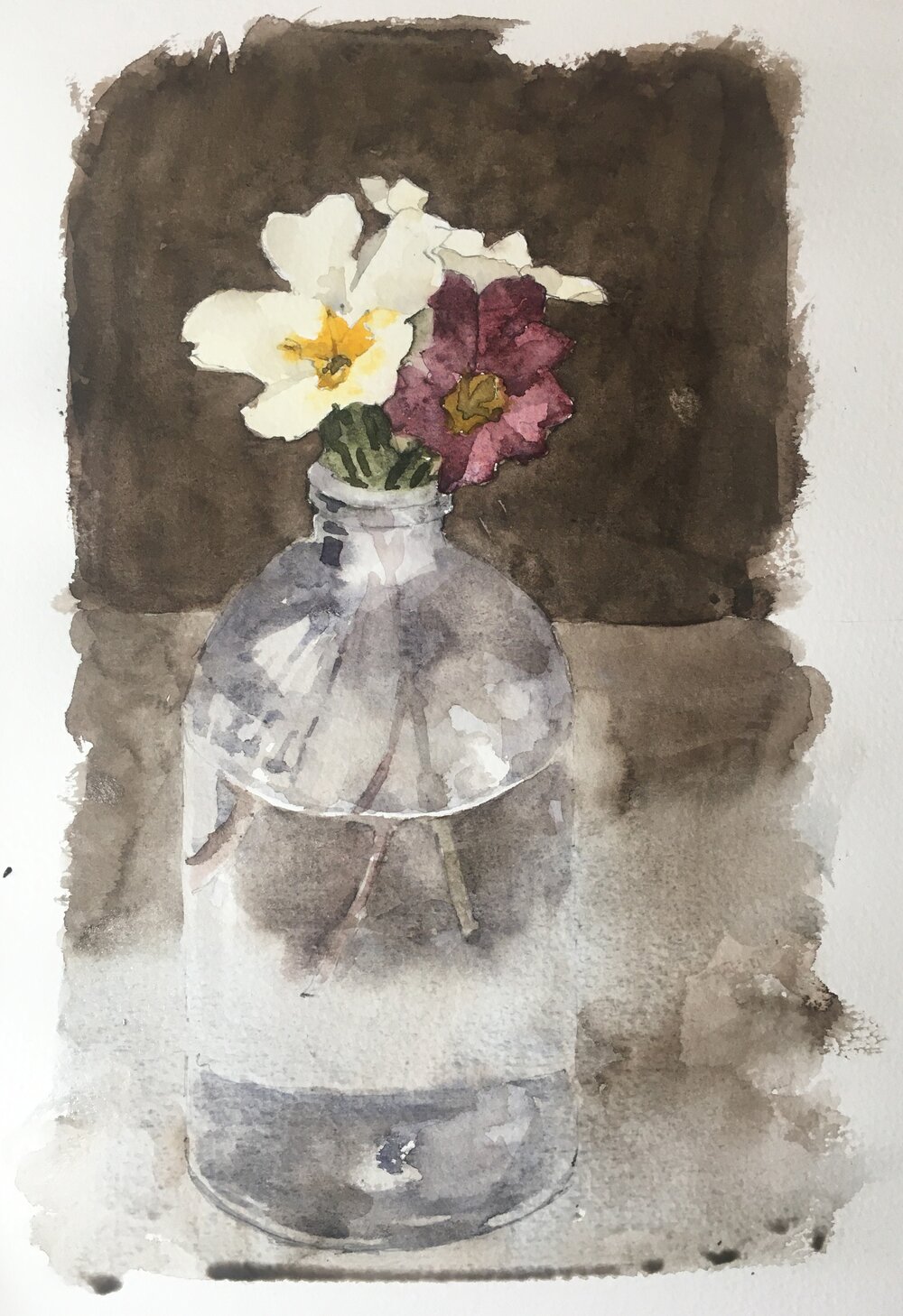 I’ve been avidly watching
Paul Foxton’s
oil painting videos on Facebook. He has a fantastic way of telling you what he’s doing that is incredibly instructive. I highly recommend looking him up and his
website
also has a wealth of information on it. He also runs online courses which I haven’t investigated yet but I may well do when I’ve saved up some pennies.

But anyway. I was watching him paint a still life of 3 yellow roses and thought that I’d like to have a go at that just for a bit of an experiment. I took a quick screenshot of his setup and just went in with paint without drawing. This is not my usual way of working and frankly I thought it would be a disaster and I’d end up throwing it away. However, I took it seriously and tried to carefully measure the colors and values and match them as best I could. Amazingly I got a lot closer to what I was intending than I ever thought. Now, things aren’t perfect by any means but carefully measuring the colors and values I got a lot closer to the effect I was hoping for than I usually do with flowers.

The main things that helped me was very careful consideration of the hue and value (with a bit of attention to chroma) for each area. I tried to hit it first time (failed for the most part) and in subsequent layers to keep any extra pigment within that value range. This kept me from making the flowers too muddy and close attention to the hue kept the deep parts of the roses close to the original.

There’s lots of stuff I’d change of course. The vase is actually a different shape and the edges of the flowers are too crisp. I misread the background color and made it too red and the leaves are a little too broad. I still didn’t get enough chroma in the depths of the roses and there isn’t a lot of form to them. Oh I could go on and on…..

And the main thing I should change is that I did this from a screenshot and I should really be sitting in front of actual flowers. I don’t have a great lighting setup for that right now but I’ll be rectifying that in the next couple of weeks.

Oh and the final thing – painting flowers is
exhausting
!! This took me a couple of hours I would say but I was basically useless afterwards. Very intense. Constant concentration and judgement required and one false stroke and all is lost. Never let anyone tell you flower painting is for wusses.

Oh and the final final thing – I actually did two. Here’s the first. 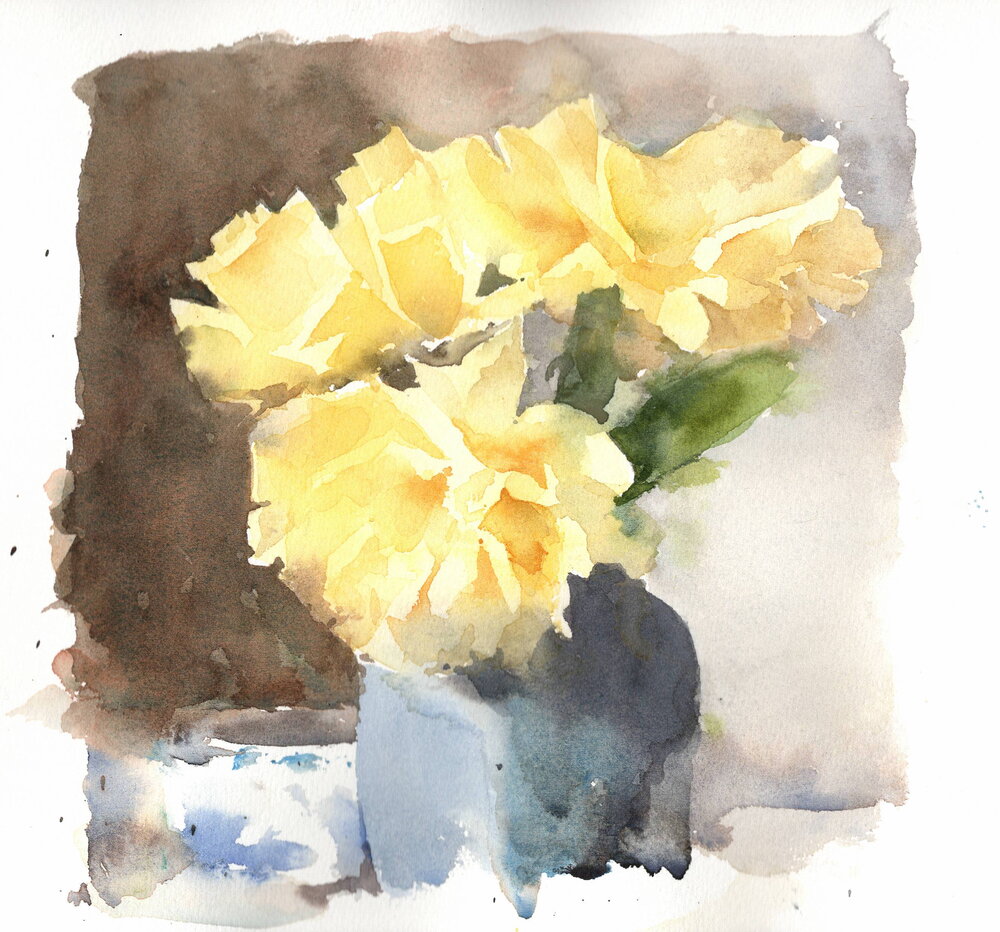