Well this was fun. I learned a lot here. The subject was a lime wedge against different colored backgrounds. In the end I used pretty much the same colors for the wedge itself but the background (obviously) and the foreground and reflection changed color. In particular that reflection, even though it looks yellow/orange is in real life a pure grey. Who’d have thought? In hindsight I should have known as a yellow reflection on a gray background will result in a neutral gray!

Here’s a closeup of the result

Two limited palette studies. The left hand one is with quin magenta, cadmium yellow, cobalt teal. The right hand one is with naphthol red, cadmium lemon and winsor blue (green shade). Really surprised how close the colors are between the two sets.

This one is with the Zorn palette of cadmium red (actually naphthol), yellow ochre and black. Lovely muted colors and really surprised how blue that pot looks with only ivory black and white.

The ex members of Paul Foxton’s Threads are carrying on with monthly exercises and this month’s is ‘limited palette’. I’m going to introduce color for the next one but wanted to start with a value study first. Pretty tricky – there are a lot of close values in there

Still brushing up my oil skills. This time with another of Paul Foxton’s livestreams.

Yesterday was session two in Paul Foxton’s Threads workshop. I should put a word in for this if you want to learn the ins and outs of color and value. He’s a great teacher and each session is enormous fun. I’ve learned a lot and had a great time doing it. And all for $20 a month!

I’ll probably refine this a little more tomorrow. That handle is annoying me. Here it is next to the photo reference.

Actually I don’t think I posted the previous intermediates. Here they are.

Still wrestling with the oils and doing a couple of still life studies with Paul Foxton’s Threads group. Slowly getting there.

Painting has taken a little bit of a back seat this week as I finally decided to make a James Gurney style lightweight sketch easel. He has a fantastic video showing you the details
here
and many more details on his blog
here
.

The materials didn’t cost very much themselves. The wood was $15 and I have enough to make 4 more easels if I want to :-). The hinges were $10 and the little nalgene 2oz water jar was $6. The jar and palette are held on by small neodymium magnets that were around $10. The easel fixes to the tripod using a t-nut and quick release plate which cost around $12.

My biggest purchase was the set of travel brushes that sit handily over the sketchbook for easy access. This was $40 but I suspect will get a lot of use.

I did spend a fair bit more on tools. I needed special drill bits for the magnets and to recess the t-nut for the tripod. Then there was glue, some clamps, epoxy putty for the hinges, screws, oil for wood finishing (I found wood stain in the garage). I suspect after some use I’ll be making another one – maybe a little bigger but who knows.

Here it is with a shallow tin as a palette which I’ve sprayed with white enamel paint. Good for gouache I think. 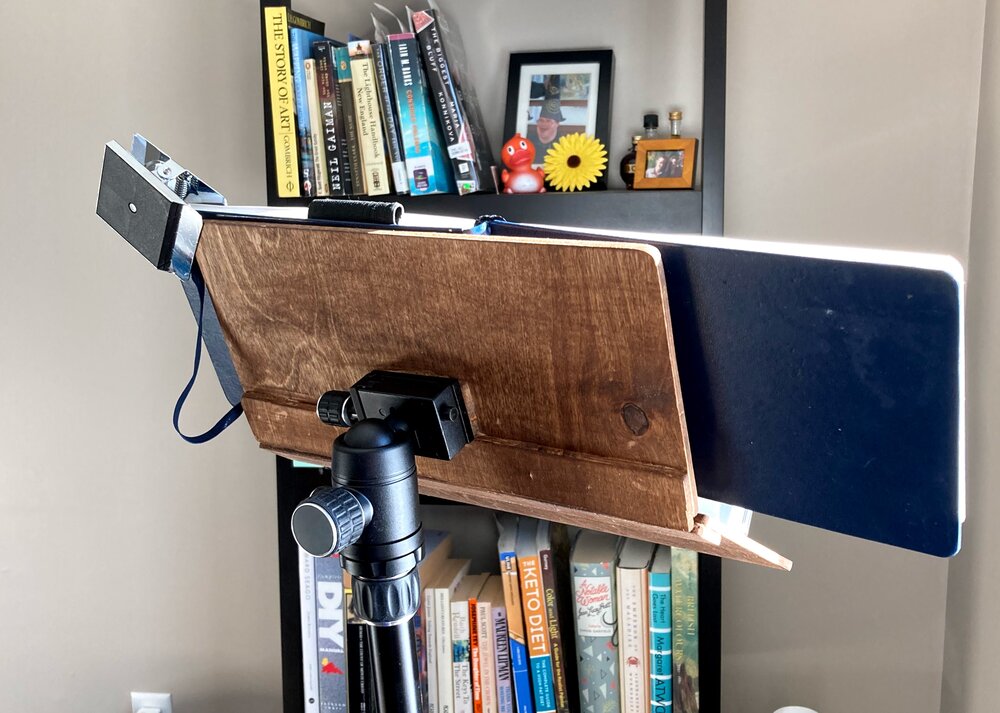 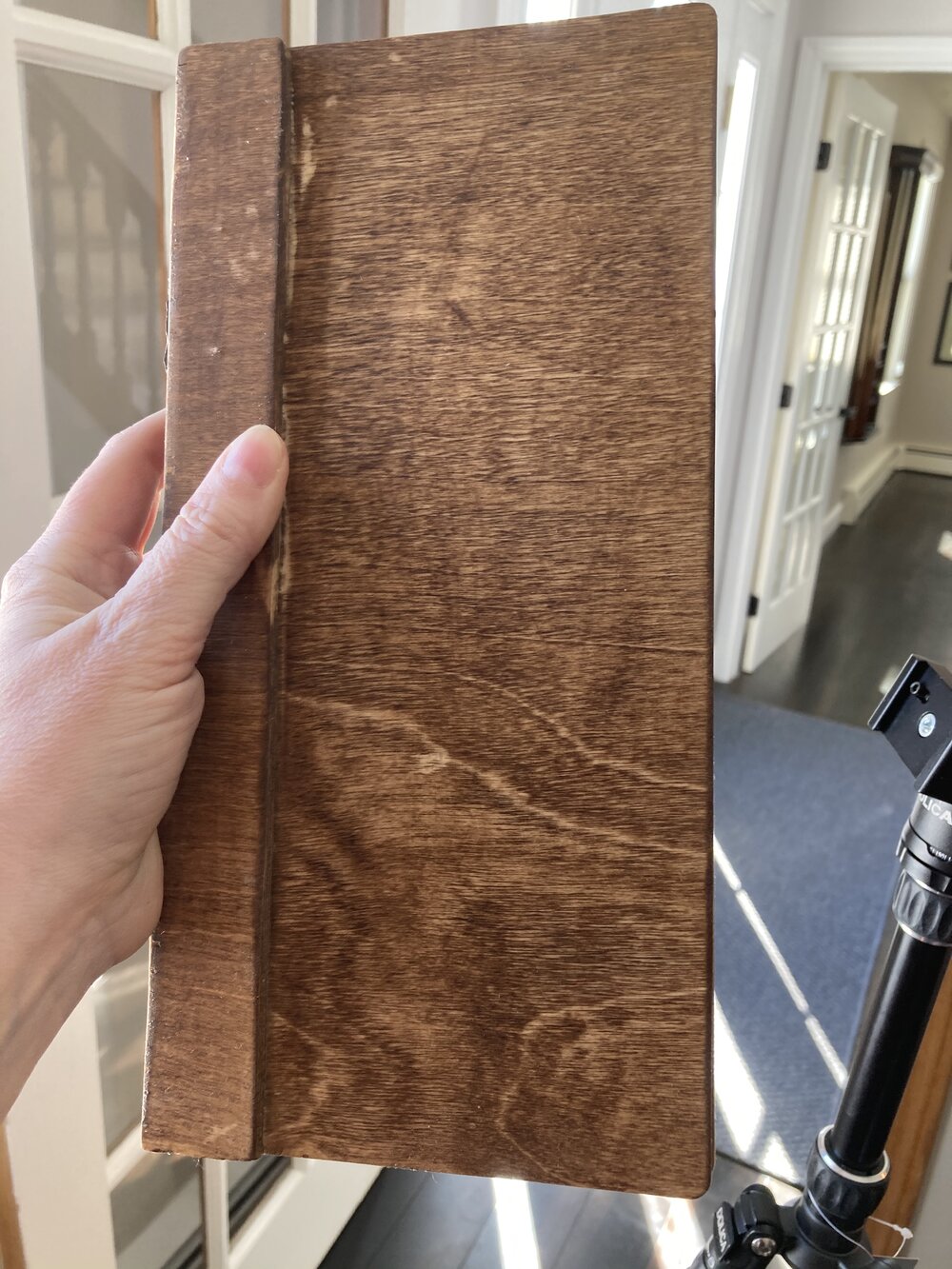 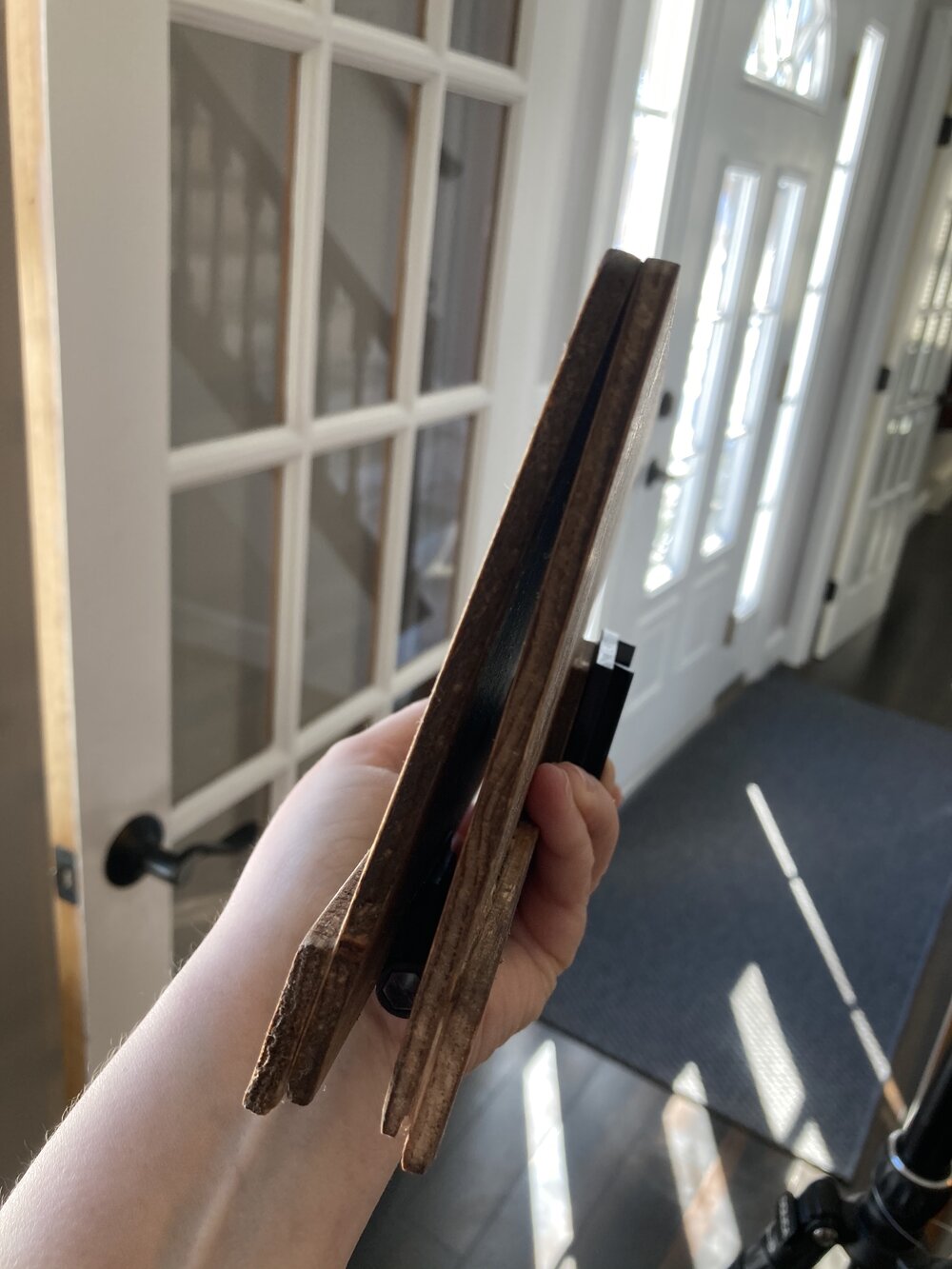 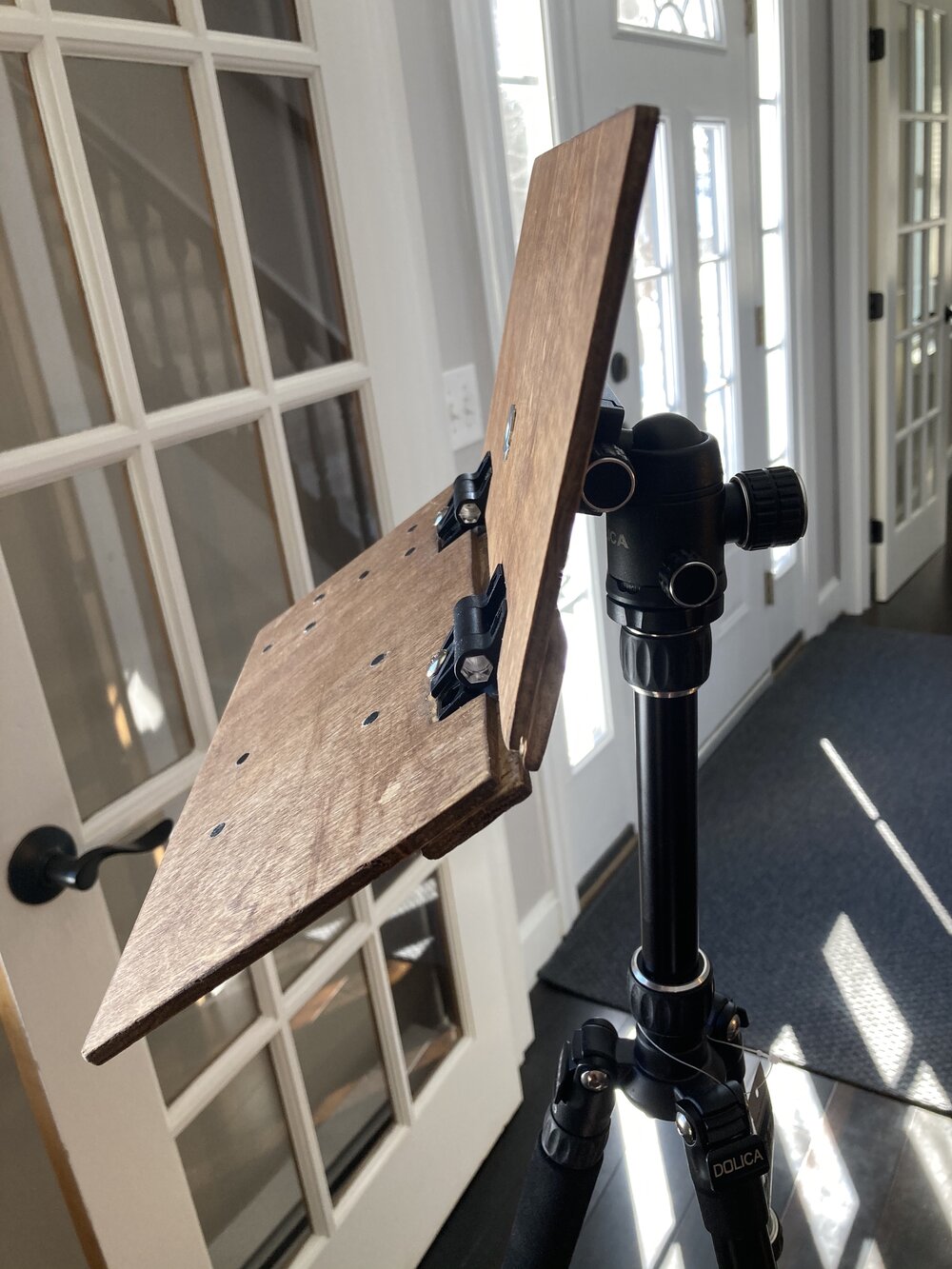 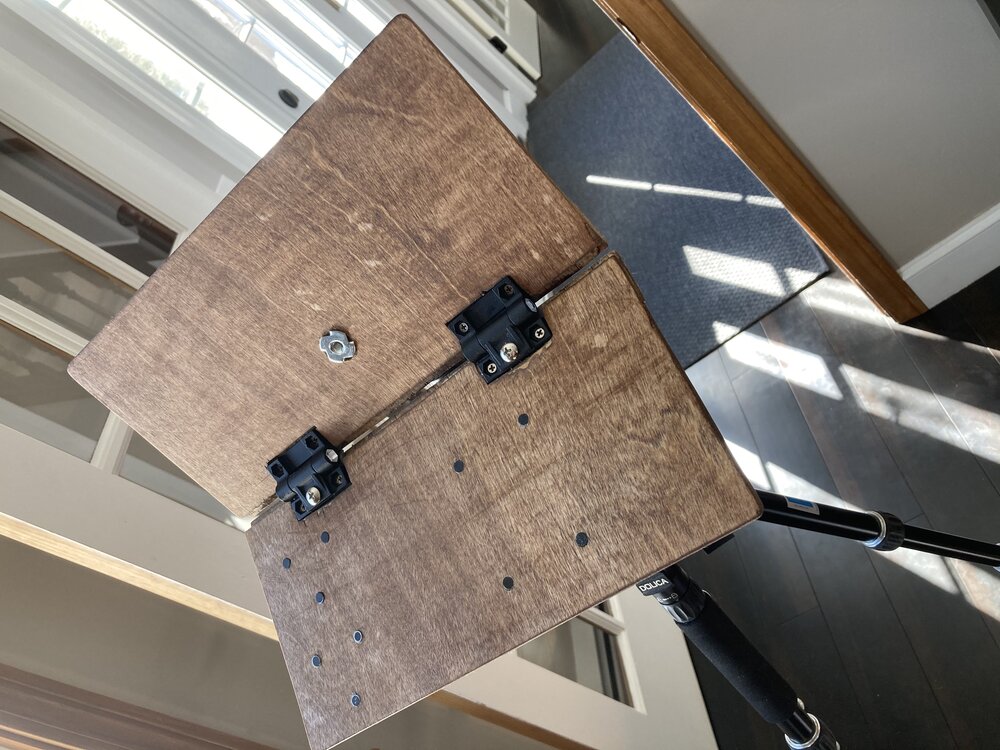 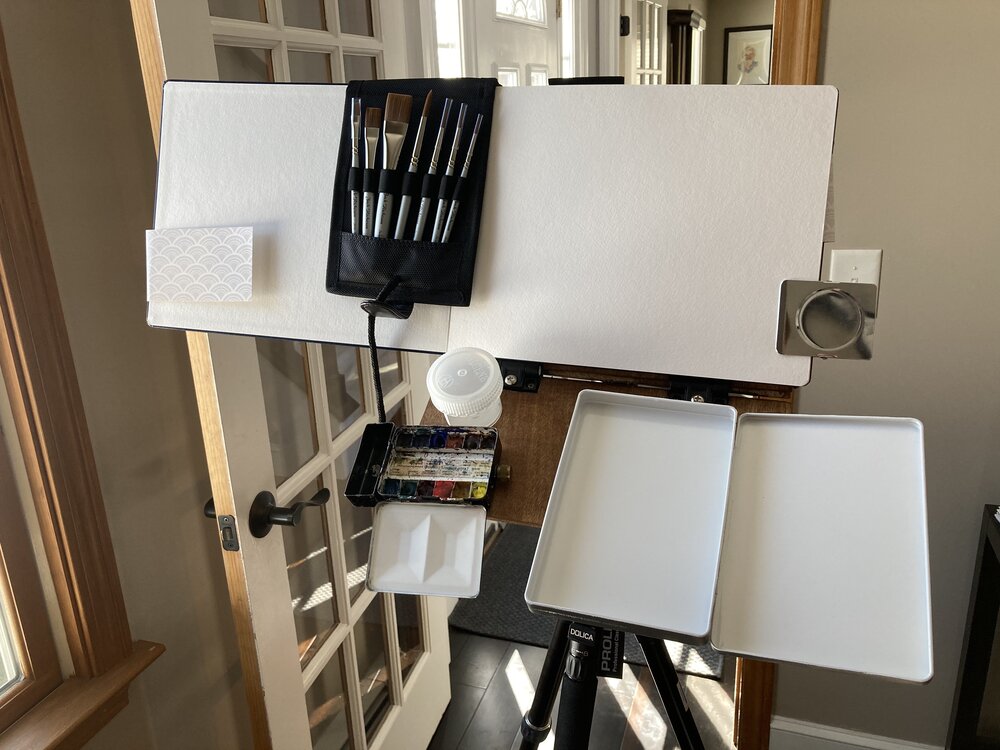 Here are some more shots! Can you tell I’m really pleased with myself? For its size and weight it really is a useful little thing. Can’t wait to try it out in earnest. Many, many thanks to James Gurney and all the wonderful helpful people on the
facebook sketch-easel group
.

Now this didn’t come out quite how I imagined. I knew it was going to be a struggle and definitely turned out that way. As usual I’m in two minds. I think I like it but let’s see what tomorrow brings.

I’m starting to prepare for next months classes and needed some good, clear still life references. Out with the trusty tripod and LUMIX ZS50, some coroplast board and assorted fruits. I like to have bright and light photos for my still life classes. The classes are great for practicing color identification and mixing and the fruit shapes are simple enough for beginners to tackle. While I had the gear out I took some photos of my white wood blocks and colored spheres. The blocks are great for practicing painting values and the spheres for modeling form correctly. They seem simple but they’re not.

Clear colors, crisp shadows and a white jug for a little height.

These are polystyrene balls which I’ve painted using acrylic. They’re not perfect – the bobbly surface disrupts the smooth change in value so I might invest in some wooden ones. Good enough for now though.

I’ve been rooting around for something that really tickles my fancy to get me back into painting again. One of my Christmas presents was Andrew Loomis’ Creative Illustration book which has a lot of top notch painting advice and I highly recommend. One of his example paintings is of the lovely lady above and, as I haven’t done much figure work recently, I thought I’d have a go.

She’s done entirely in a combination of ultramarine and burnt sienna. I wanted to try and combine the granularity and washiness of the watercolor with the subtle range of tones in the flesh and face. Pretty happy with the result although the facial likeness to the original is not that close.

Here are some intermediates:

Started off with a rough pencil drawing and a fairly light wash to put in the main areas of light and dark. I was careful to not leave hard edges where they would draw attention to themselves but also lose edges where the values were similar.

Next I went in with some darks to define the arms and shoulders and the hair around the face. I put some detail in the face but was careful to keep the values light.

Next was putting some detail in the dress, defining some of the folds but leaving other areas quite in distinct. Some subtle shading for the hands but kept them with low value contrast so they don’t detract from the face. The face went in next and was almost a disaster as I was working quite small here.

The final thing and managed to stop before I ruined it. A little more definition in the face and some more interest in the background to frame the face. A little more detail in the hands and a few tweaks to the dress more to aid the composition than anything. Phew!