I’m starting to prepare for next months classes and needed some good, clear still life references. Out with the trusty tripod and LUMIX ZS50, some coroplast board and assorted fruits. I like to have bright and light photos for my still life classes. The classes are great for practicing color identification and mixing and the fruit shapes are simple enough for beginners to tackle. While I had the gear out I took some photos of my white wood blocks and colored spheres. The blocks are great for practicing painting values and the spheres for modeling form correctly. They seem simple but they’re not.

Clear colors, crisp shadows and a white jug for a little height.

These are polystyrene balls which I’ve painted using acrylic. They’re not perfect – the bobbly surface disrupts the smooth change in value so I might invest in some wooden ones. Good enough for now though.

The painting situation was getting a little out of hand. They were in my office, on the floor, on the shelves, on the tables. Time for organizing and storage. Each year gets a box (or two) and I print out a picture of the contents on the front for easy location. If something gets sold then I mark the date and price on the front. Not the highest of tech but it works.

Last year I had an extra box – 2018 R. James asked what the R stood for. I said ‘Rejects. It stands for rejects. Failures. Too awful to live with the other paintings’. Last year’s box was quite full. This year I only had a handful. Either I’m getting better or more tolerant of the rubbish. 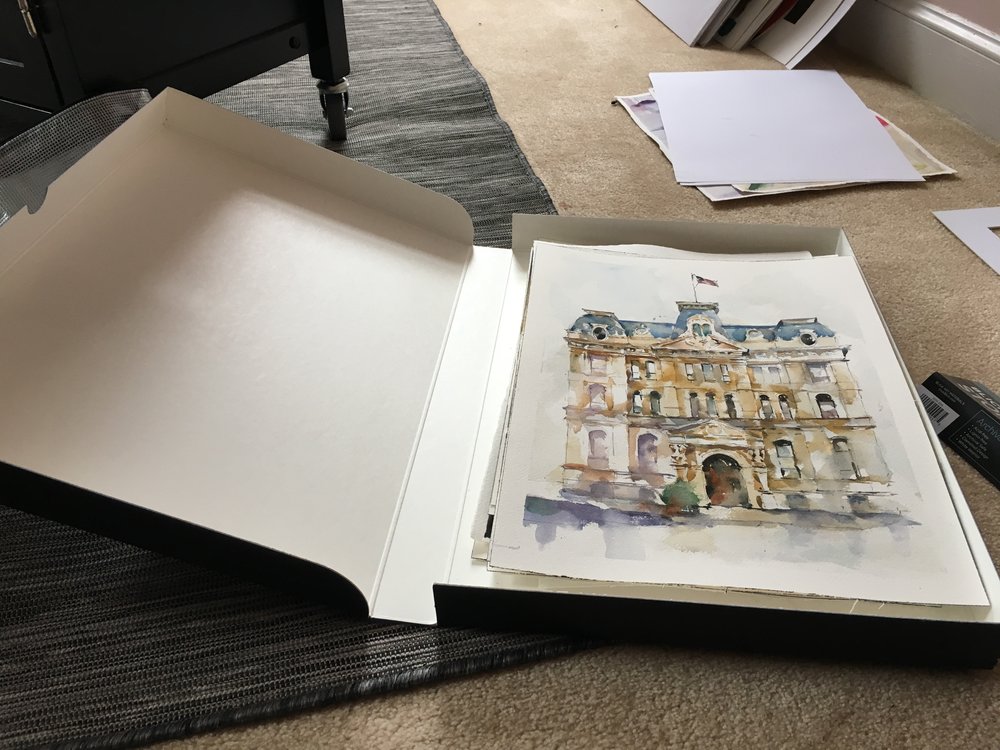 Well that was a huge burst of painting.   I’ve taken a few days off interspersed with trips to ship things and thought it was about time to rediscover the studio floor.

I keep track of paintings mainly through the website blog and ordering system but, in an uncharacteristic show of organization, I broke out an archive box.    Paintings go inside and I taped the collage picture to the front to show what’s in it.    Each picture has a quick note – sold,  for sale or just left blank for those not allowed out of the studio.

Finally the box was labelled with the month and year.    I realized afterwards that this might not scale…

So yesterday there was a plan.    Adjust the values,  keep some color in the darks and keep those brushstrokes nice and crisp.    This is what happened – the original is on the left and the new version on the right.

Oh dear.   If I compare to the first attempt I don’t think there’s much in it.   Yes the colors are stronger,  yes the darks are less dead but I also lost something.  The windows lost their sparkle in my attempt to keep things crisp and everything is a little disjointed.   It’s as if I was going – now we paint the van,  now we do the windows,  now we paint the shop front.  Nothing joins together.

The van is still good though 🙂

No we need another plan.   At this point I generally go back to my reference books and the internet to see how the experts do this.

Now this has a lot of similarities to our original photo.   We’re looking at the building face on,  we have a shop front,  and there are no shadows cast on the building to create interest.   This should be a painting we can learn a lot from.

One of the things he has done here is to introduce a lot of visual interest into the walls themselves.  We have variation in color with a light base to the wall and stronger color over it.   He’s also added some brickwork detail in places.   Not too much and only in small areas mostly close to the shop front itself.   He’s also kept the bricks subtle  – there are only slight changes in value to the underlying wall color.  They stand out but don’t overwhelm.   He’s also decided that the shop front will be the main center of interest in the painting.  The darkest darks and lightest lights are here and also the brightest colors.   Everything else is muted in comparison.   Sometimes it’s done with muted paint color and other times going over with (I’m guessing) diluted gouache or maybe gesso.

Another strong thing is that everything joins together.    There are a lot of soft edges.  The darks of the shop front bleed down onto the ground even though this obviously doesn’t happen in real life.   The wall color sometimes leaks into the window areas as does the green of the (muted) door on the left.   The shop front signs also leak into the walls (maybe pastel here or some kind of colored pencil?).

So that’s John Lovett.  Let’s look at something from someone else – Joseph Zbukvic.

Even though the style is very different we can see some similarities in treatment.   The high contrast areas – the darkest darks and lightest lights – are at street level.   The walls are more muted and demand less attention.   They also show some textural interest through slight color changes.  Not as much as the previous painting but they add just enough interest.  Enough to stop being flat and dull but not so much they overwhelm what’s going on in the cafe.

The treatment of the windows is also worth paying attention to.   Yes they’re pretty dark but they’re put in pretty loosely.  You know that these windows are rectangular but the brush marks don’t actually define them as such.   This is a *ridiculously* difficult thing to pull off.   Having watched his DVDs he puts these marks in very quickly but, in the hands of us lesser mortals,  there is a very fine line between suggesting and just looking sloppy.

Finally there is a lot of wet in wet work here.  Even where there are crisp marks defining the window shutters it looks like the paper is still a little damp.  This leads to some bleeding of the colors that doesn’t make things look like they’re pasted on.

Let’s look at one more – the wonderful Charles Reid.

When looking for example paintings I chose ones that had similar problems that we were facing in the original photo.  I picked this as we’re directly facing a wall with no shadows on it, much like we are in our photo.

Again a very different (and glorious) style.   If you look closely the wall is full of color – reds, blues, and yellows.   They’re very subtle, however,  and serve to soften the darker areas of the windows and lead from one darker area to another.   And look at the colors in those window panes!  At first glance each pane of glass is defined but when you look more closely there’s a lot of softening and merging between panes.    Making things less distinct has the effect on us of making things more believeable.

Hmm well – a lot to aspire to here.   What shall be the plan for today?

–  Darkest darks and lightest lights in the center of interest – the shop window in our case.

– Make the walls interesting!  But make it subtle – don’t overdo it to overpower the window area.   Make sure to soften edges enough to keep things from looking pasted on.

– You can use bold color but keep it subtle and under the radar.

– Don’t state each edge and join.  Just enough so the eye (or rather brain) does the work to fill in the rest.

Thankfully it’s only 30 in 30.   Here are most of the pictures (I’m missing some somewhere) and a good reason why I need a better way of displaying stuff.

This is a great room to paint in btw.  It’s not huge but is north facing and has windows on 3 sides.   If I start painting in oils, however, we’re going to have to move.