Still blundering around with the brushes awaiting some direction.   Today – planes! 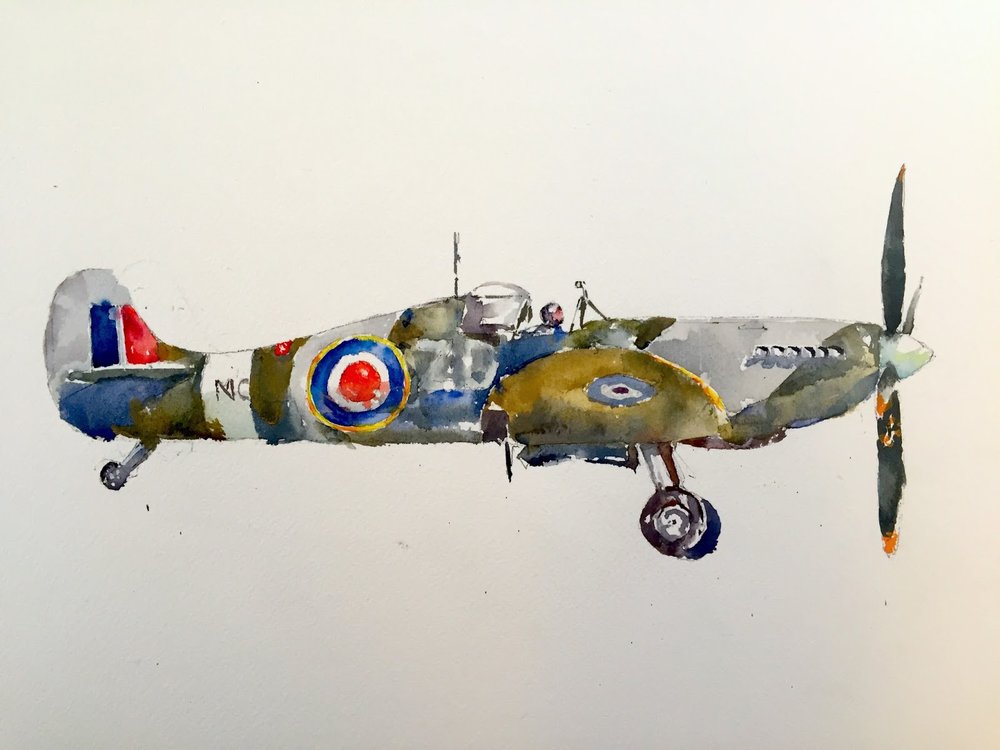 A spitfire today!    Can’t believe the end has come so quickly! 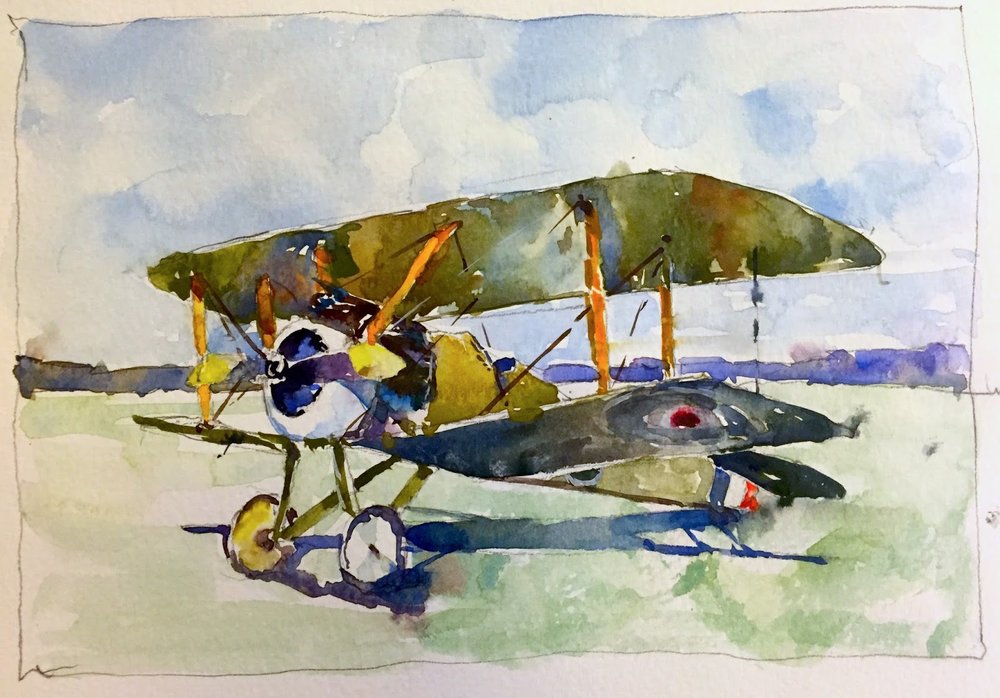 How about this for a bit of a change?  I give you a sopwith camel.   Done very quickly in a moleskine sketchbook which isn’t my favorite surface.   Has a certain charm though. 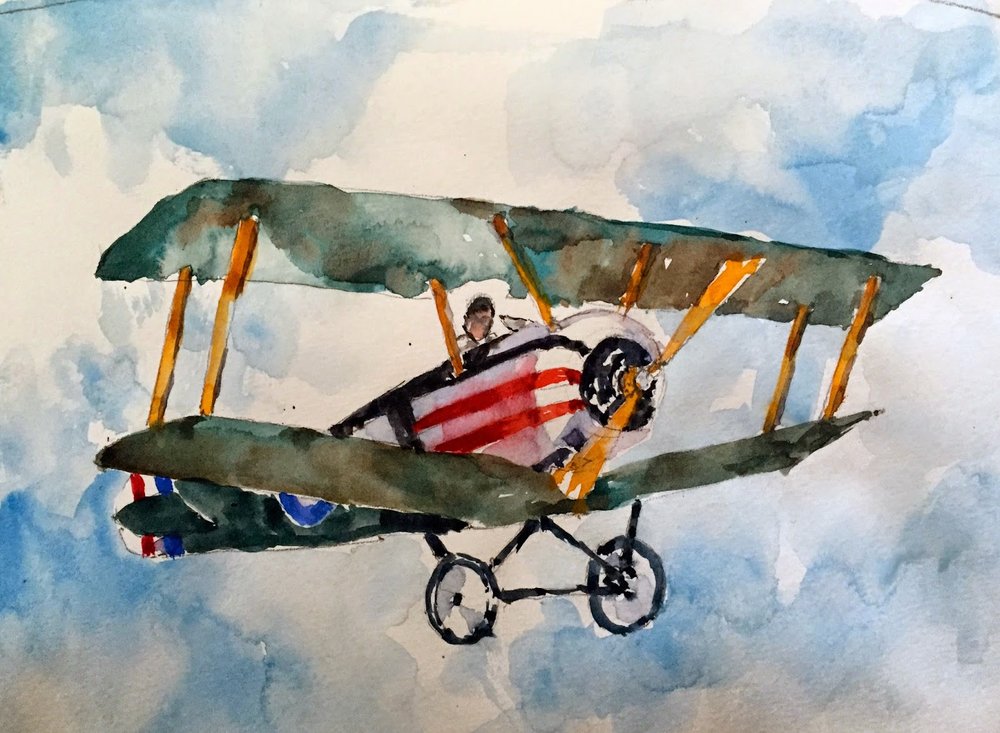 I’m on a roll with the sketchbook stuff so I thought I’d try a plane this time.   I didn’t even try and make the paper behave the way I wanted it to which speeds up painting enormously and doesn’t seem to affect the end result. 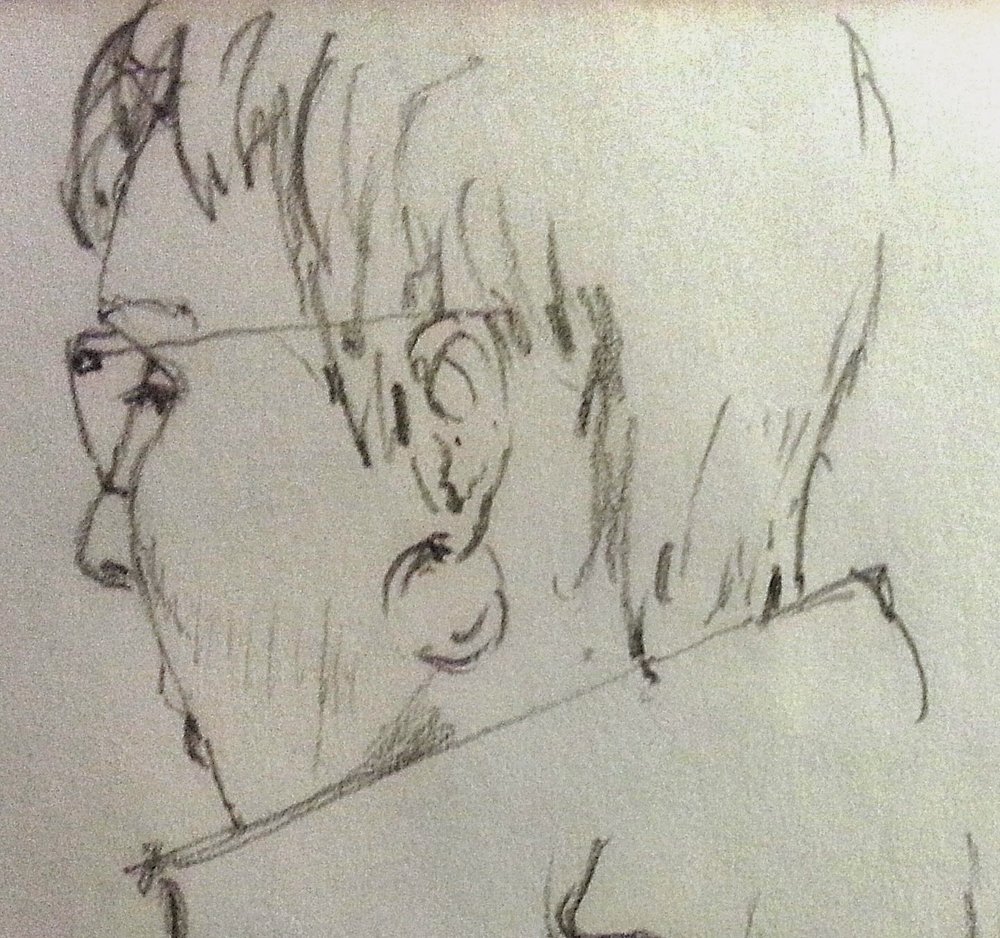 Last week was a work trip which involved much loitering around airports.   As I had my trusty sketchbook and pencil with me I could easily get my quota of 30 minutes drawing in.    The first sketch is of a lady who was sitting in front of me on the opposite side of the aisle.   People tend to move about a lot but she stayed put long enough for me to get the essentials in and its a pretty good likeness. 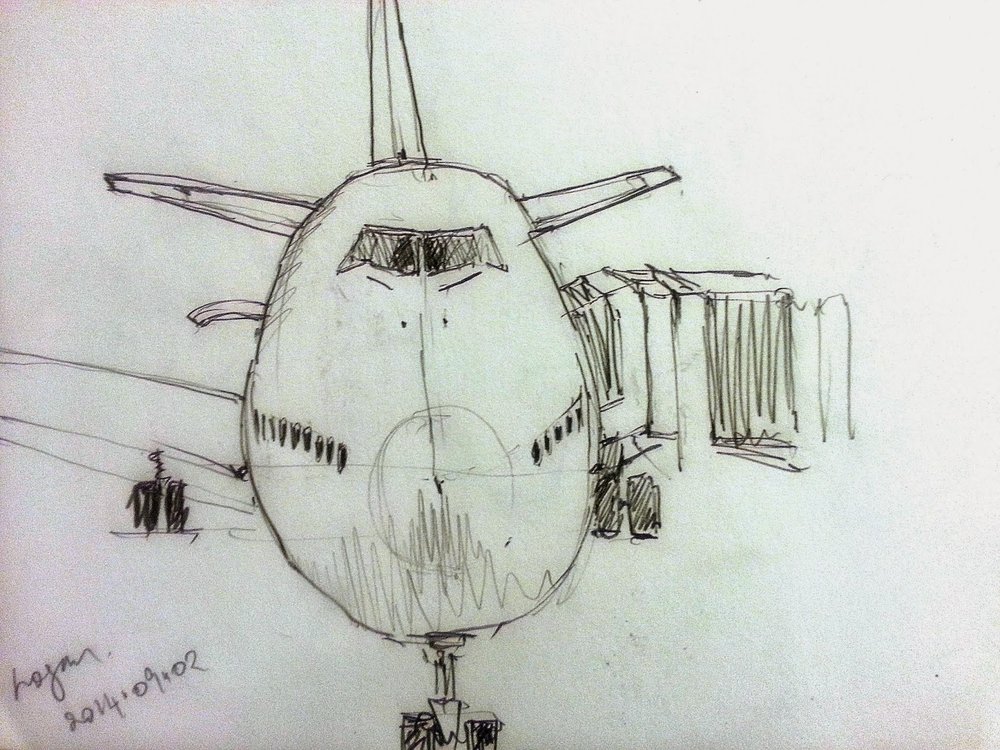 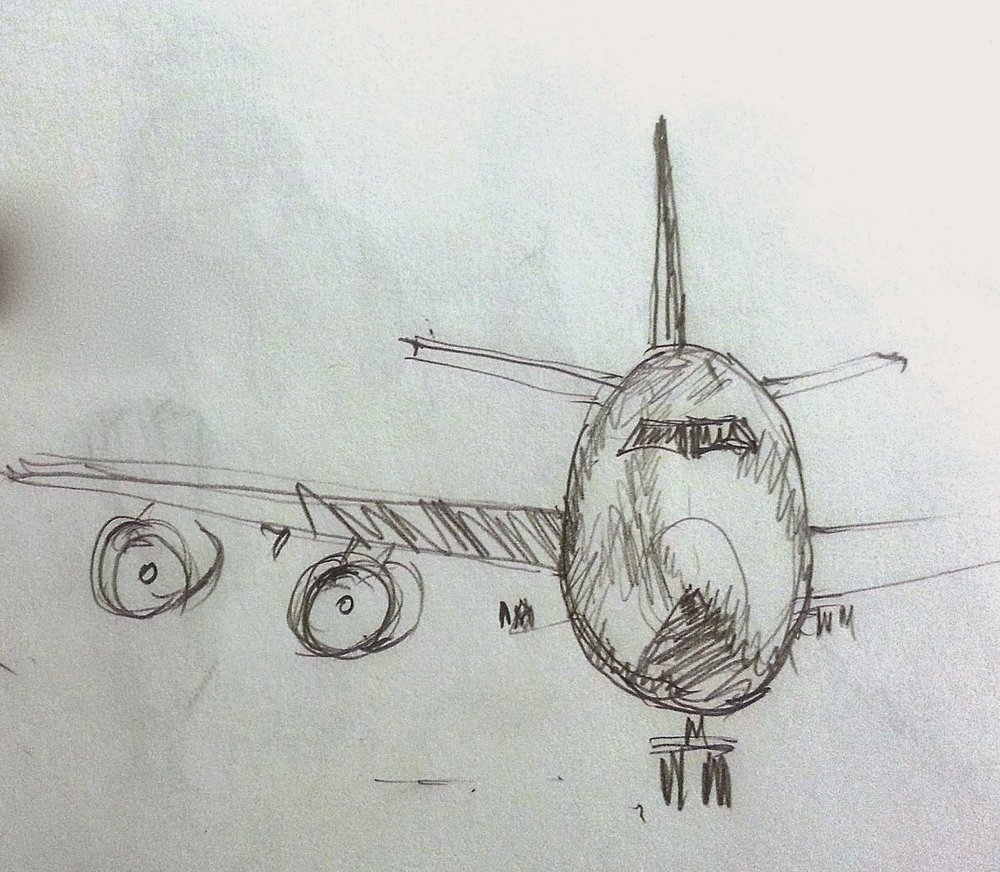 There are many good things about drawing in airports – some more challenging than others.     First of all there are the planes.    These are fun to draw as they have nice curvy shapes but with lots of interesting twiddly bits.  Also I don’t come across them very often on a day to day basis so sketching them is something of a novelty.   These two were done at the beginning of the trip before I’d taken off from Logan.  I was still getting to grips with how everything is put together so these are a little shaky.  I got better at the shapes as the trip progressed. 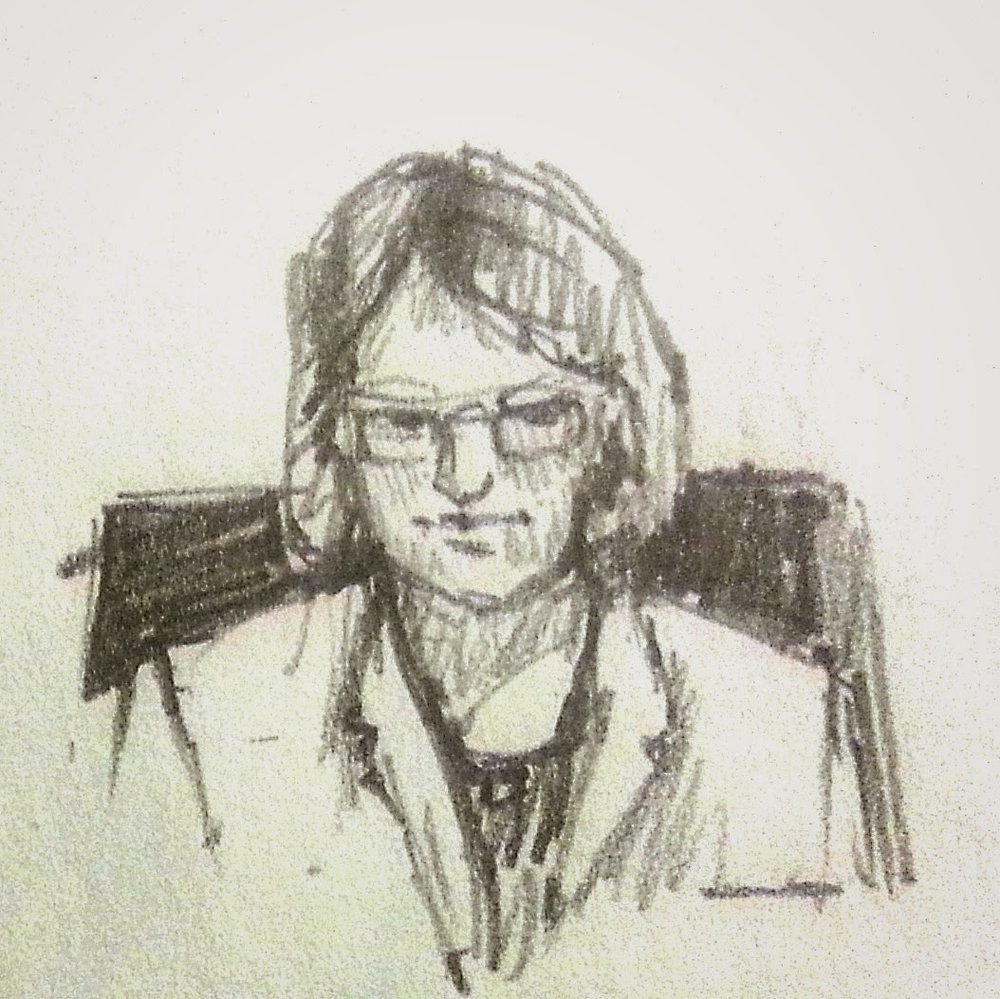 People are the next good thing about airports.   There are lots of them and they are pretty distracted so you can easily sit and sketch without them cottoning on.  These were also done at the start of the trip while waiting for the gate to open at Logan.

The downside about people is THEY KEEP MOVING AROUND!!!  Even when sitting down they’re fidgeting and changing position constantly.  However, this is good for training you to memorize quickly the main shapes/postures.  After you have the basics down you then have to improvise the details when they’ve disappeared from view.   Sadly it doesn’t make for very good drawings but does sharpen up your observational skills in short order.  These were mostly done within a 2 and 30 second window to get down the essentials.

Note how most of the moving ones are done from the back.  People get a bit disconcerted if they’re walking towards you and see you staring intently at their body parts.

More planes.  I was getting more into the swing of things by now.   Here’s one from Edinburgh and one from Dublin.   I also discovered the blindingly obvious thing about planes in airports.  THEY KEEP FLYING AWAY!!  Even though I was only spending 5-10 minutes on each sketch every time I found a plane in a position that was interesting to sketch the doors would shut,  the elephants trunk would retreret and it would taxi away.

These were on the return journey at Edinburgh.   The first is a view of the other side of the terminal and a few sketches of ‘planes from different angles’.   Planes are nice to draw.  I could get used to this.

More planes – all flew away.

These were right at the end of the trip waiting to board to go back to Logan.    These were the most successful figure sketches.  I managed to get more of the ‘gesture’ in these with the fewest number of lines.  Quite happy.

More pre-boarding waiting.     Everyone has these HUGE backpacks as well as the wheely trucks – what do they put in them?

Finally on board and on the home stretch.    A couple of the cabin crew and a view from the window.

My tools.   My drawing implement of choice right now is something a little more exotic than usual.   I usually like to keep things simple but I’m currently favoring a water-soluble graphite pencil made by Derwent.   I like this even if I’m not using water because it looks and handles like graphite but doesn’t rub off on your hands.  And, if you’re me, rub off on your face,  your neck, and any other exposed skin that I happen to touch.   I do also carry a nifty niji waterbrush.  You fill the handle up with water which seeps down into the brush so you can paint with it.
The paper is nothing special but the pad was made by the Bee Paper Company and who doesn’t like bees?   It’s also fairly small and not too thick so I can carry it in my bag at all times without it getting in the way.
The big grey thing is a pencil sharpener.  I’m a sucker for a new style of pencil sharpener and have collected a lot of sub performing sharpeners over the years.  This one is one of my faves.    It has 3 different shaped holes and 2 sealed compartments for shavings.    Shavings is another reason why I like the water soluble pencils – graphite shavings get EVERYWHERE every if you use a sealed sharpener.   Unless you seal everything up in a ziploc (and sometimes not even then) the shavings escape and everything gets grey – your bag,  your hands,  your phone, your earbuds – everything.

Finally, and this isn’t essential but I like it,  I insert my pencil in a pencil extender so I can use them down to the nubs.   They’re cheap but somehow make me feel like a professional 🙂