Today was spent painting strips of paper. Although they look simple there was a lot of painstaking color and value matching before painting. This was the third and most successful one. The painting looks slightly different due to me taking the photo from a different angle than my actual view when painting. The shadow is ridiculously hard and there’s no room for mistakes or do overs.

Here are the first two : 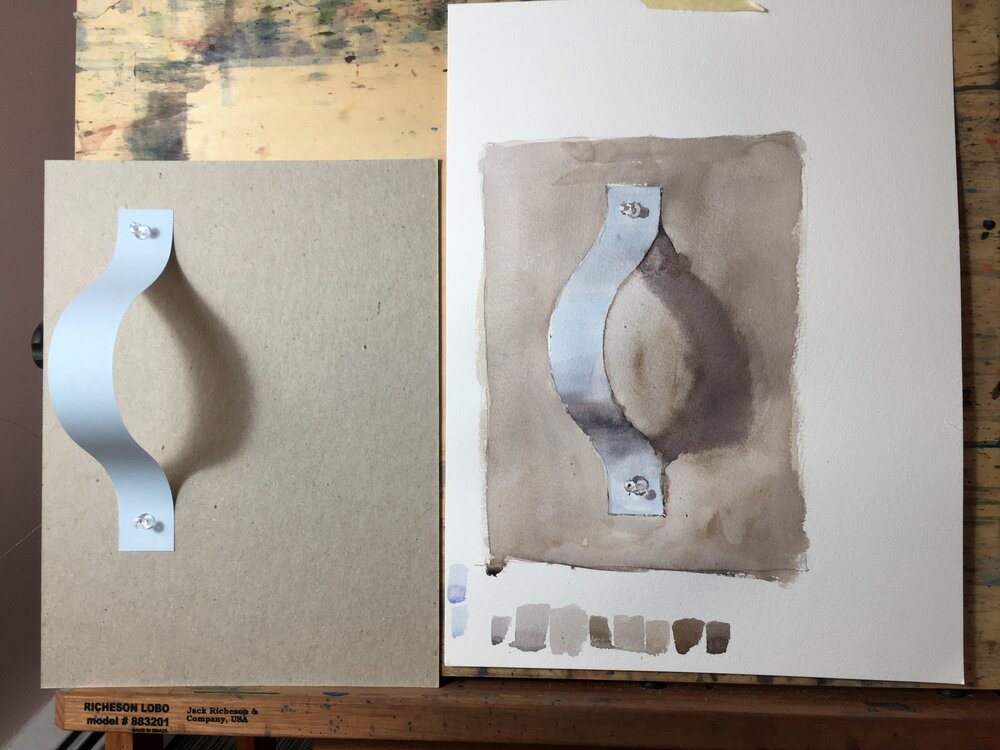 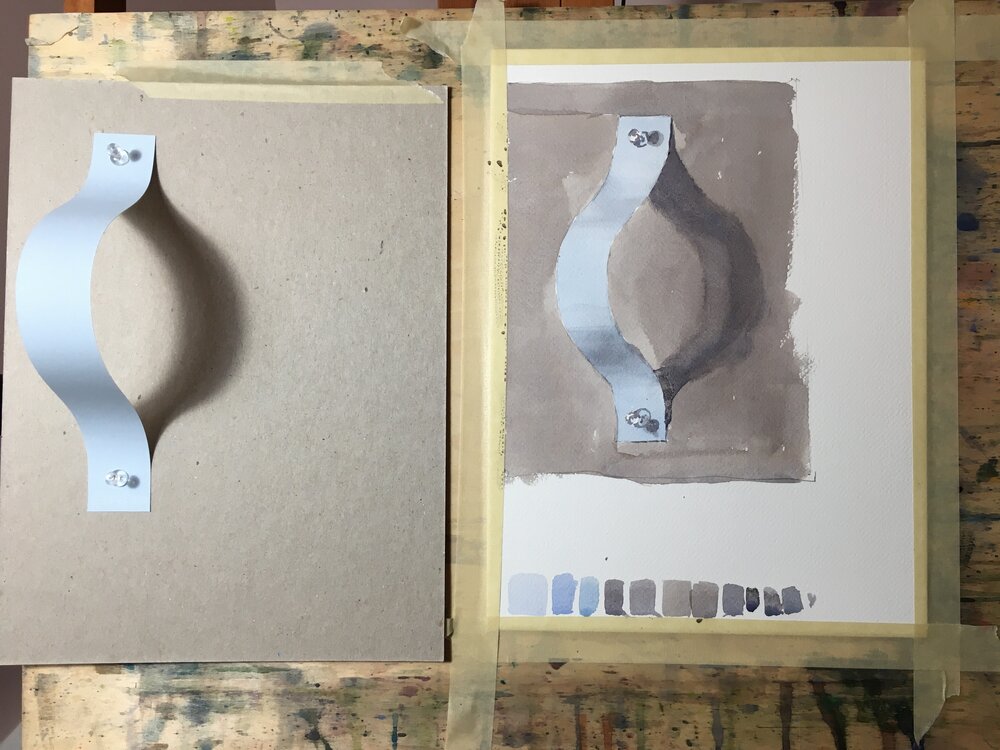 I originally had the board with the gray side up and matching that color turned out to be the hardest bit of all. to make life easier I flipped it over for the yellow strip.

We’re moving forward at Cuff and Clamp towers with new videos. Different camera setup and better sound and video quality. This video demo is for one of my watercolor classes at
Post Road Art.

This is the current setup – it’s evolving.

This is the current state of play with the rose paintings. I chose a more subtle range of values for this one and went straight in with paint with no prior drawing. This turned out to be more successful than I first thought. The previous two weeks of drawing roses definitely helped me keep track of the rose construction and where the petals are. It’s been a pretty successful series I think – lots learned at every stage. 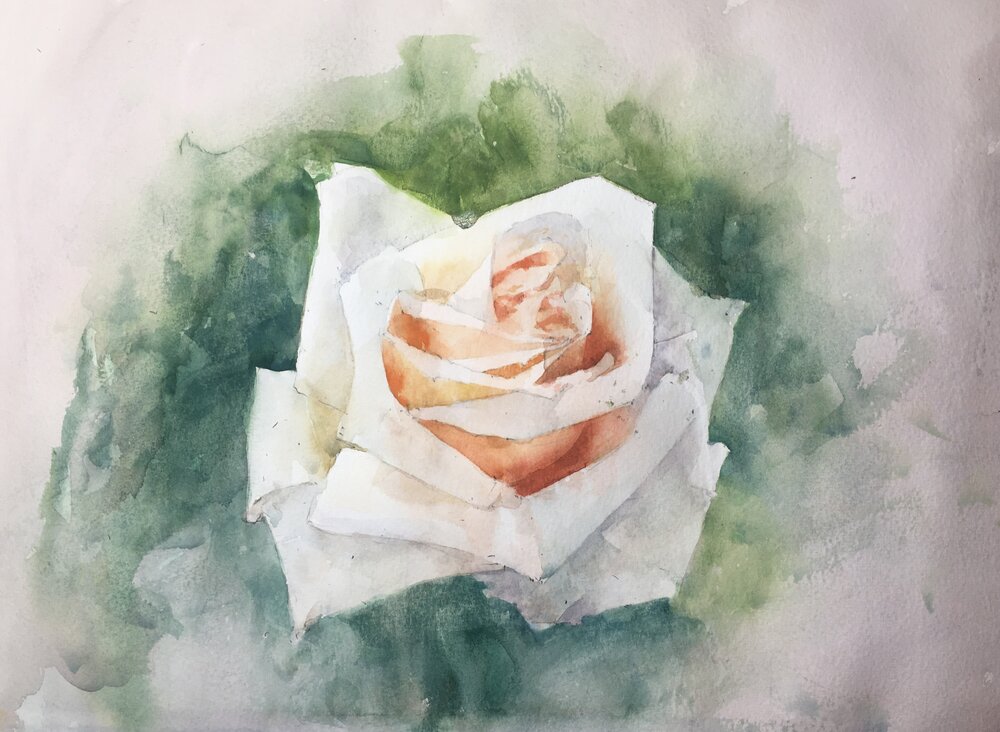 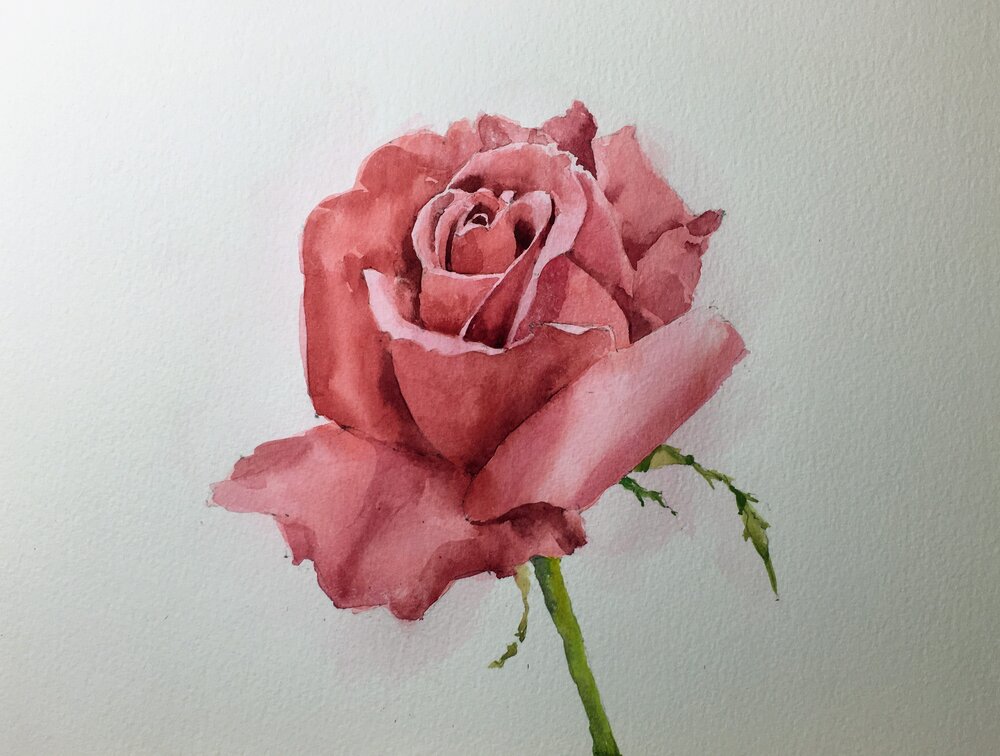 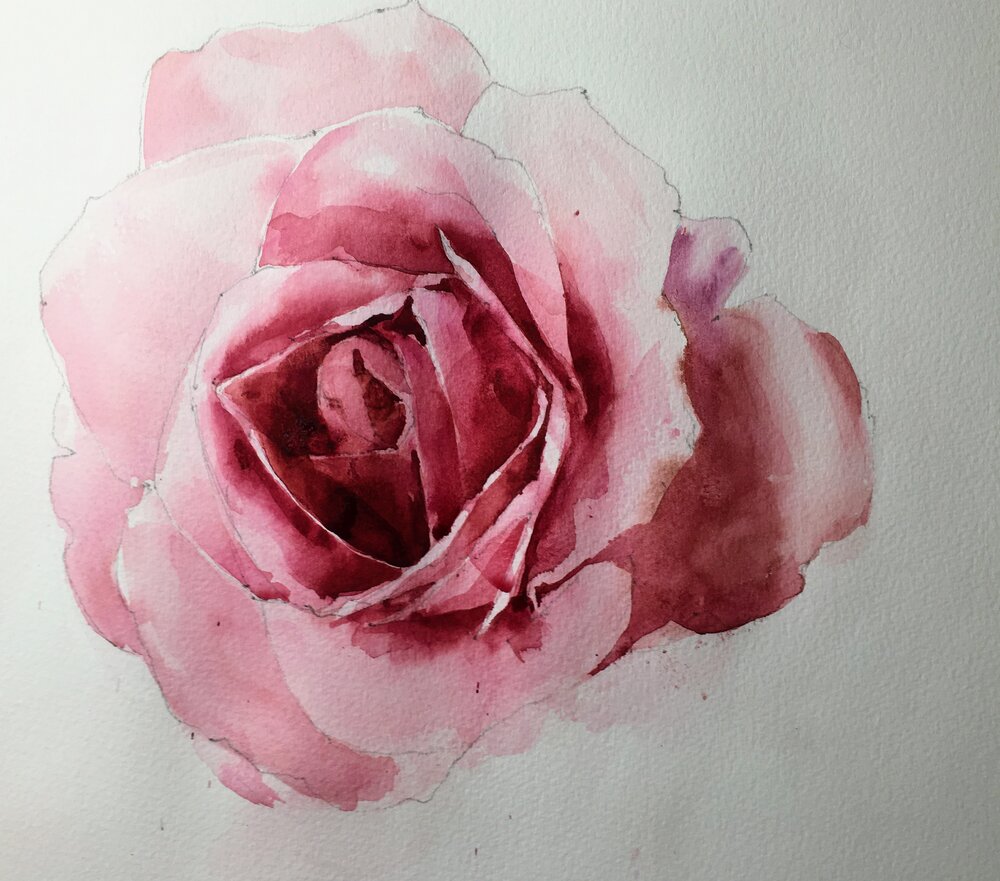 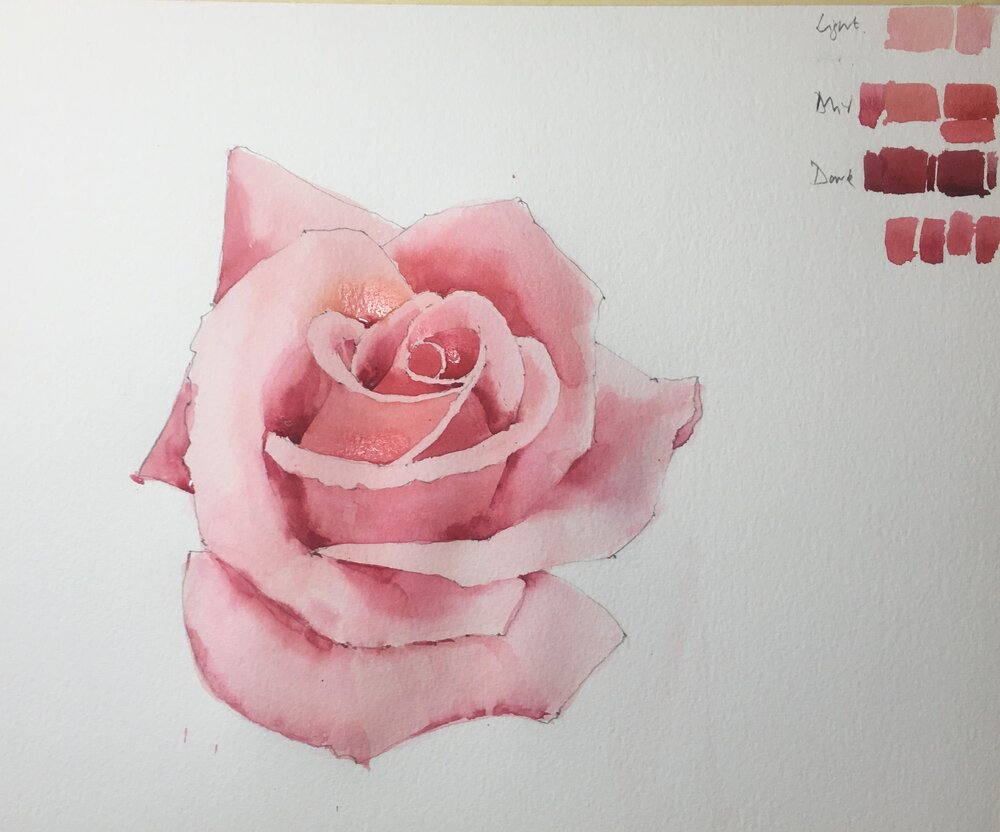 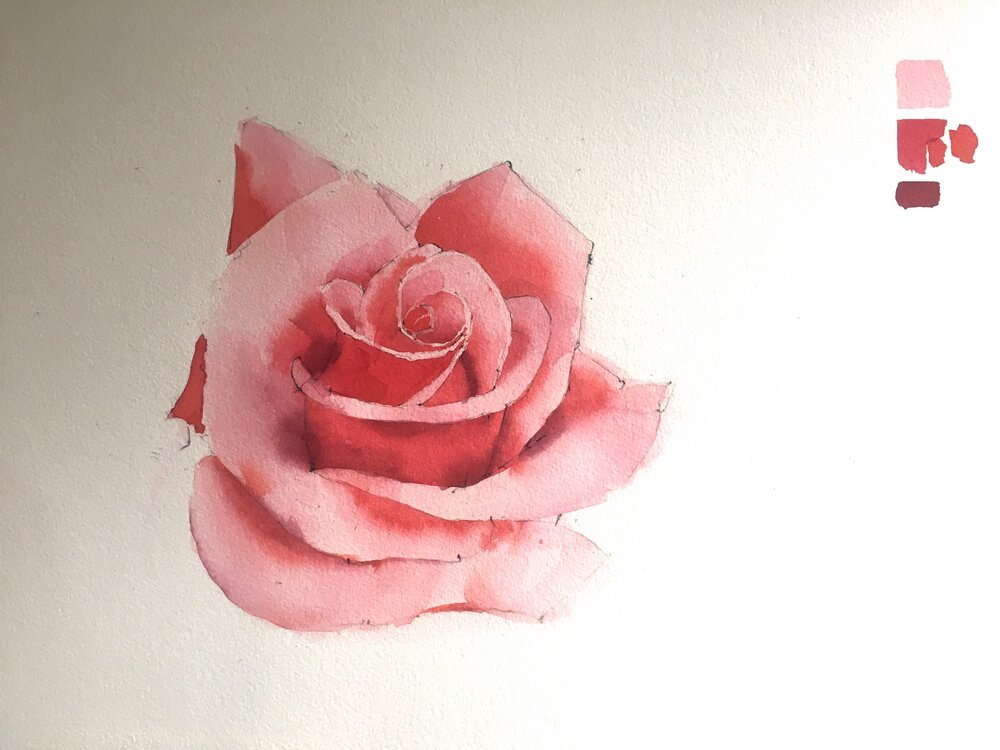 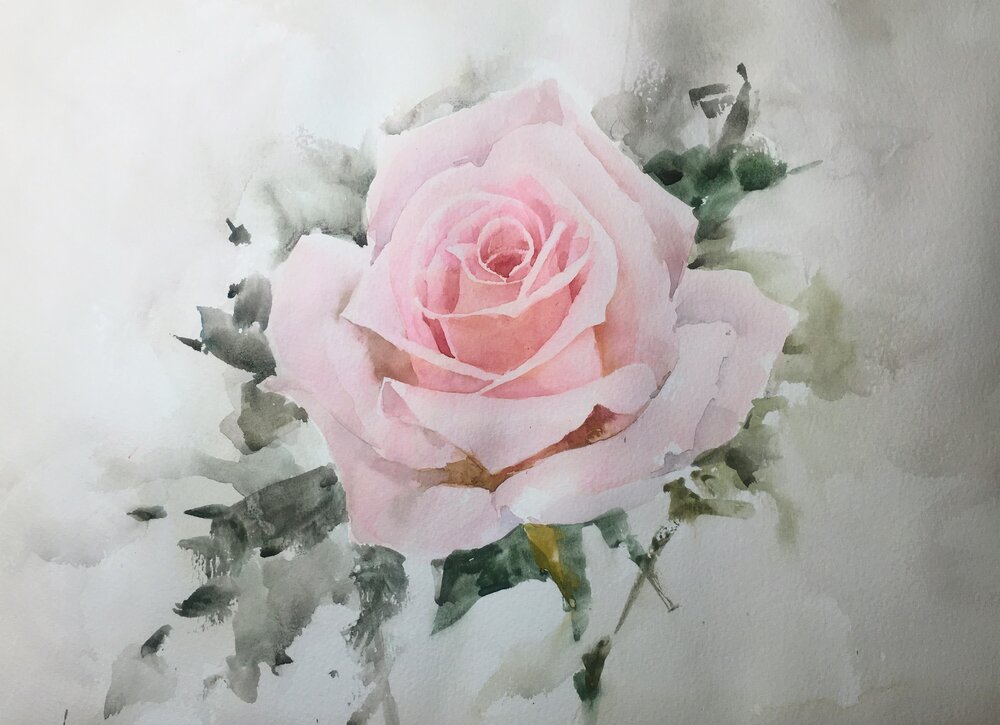 Still searching for a good flower setup for class. I thought that maybe including some surrounding items might make the flowers easier to represent. However, it doesn’t.

Daisies today. A big trial – I thought the background would be no problem at all and it ended up being a huge learning experience.

I consider this a failed experiment but I can see there’s some good things in there. I definitely need more experience painting these – I’m far too tentative right now and that’s leading to stiffness.

My lovely husband set up the fancy microphone and camera to test out video today. Some people in my class like to see demos but I don’t want to take up too much of their time with me painting. So we thought about videoing me at home and I can then give them the links. Very much a work in progress but I was pretty happy with how this one turned out. We’ll keep going and work out the wrinkles as we go.

And I managed not to ruin the painting too. A good days work.

It’ll be flowers for a while at Clamp Towers. First try – a rose. Today’s discovery is that lost edges are vital in flower painting.

There’s a section in Betty Edwards’ ‘
Drawing on the Right Side of the Brain
’ book where she suggests to draw a picture but turn the reference upside down. It’s meant to stop you focusing on the ‘things’ you’re drawing and to just concentrate on the shapes and lines. It’s remarkably effective and her book includes some striking examples of right side up and upside down drawings from her students.

So I thought – would this work for painting? Well there’s no harm in trying is there?

Here’s the drawing. I didn’t really notice that much difference as I was going through this. Probably because I’m pretty used to reducing things to shapes, lines, and angles anyway. But taking a peak right side up I was quite impressed how well it turned out. I had thought that I’d end up with something misshapen but no – everything looked good. 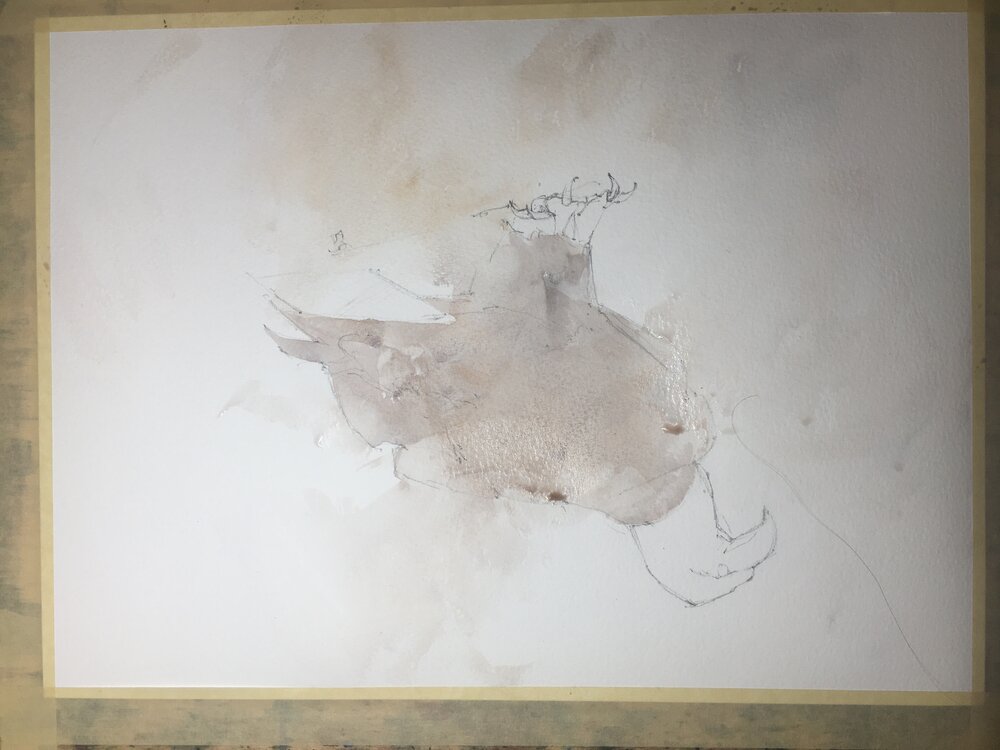 Before launching in with paint I mentally made a note of the lightest lights (the head) and the darkest darks (on the legs and on the right hand side). I then broke the shape into a number of ‘big shapes and what their values were. This was definitely easier doing things upside down. It was easier to flatten out the image and not label the different parts.

So onto the first wash. This was an all over light value wash on the dark feathered areas. I made sure to push through some of the outline to soften the edges but keep the head and foot areas nice and crisp. The idea here was to us this as a base color foe the lightest parts of the dark feathers. Most of this will end up being covered in later stages. 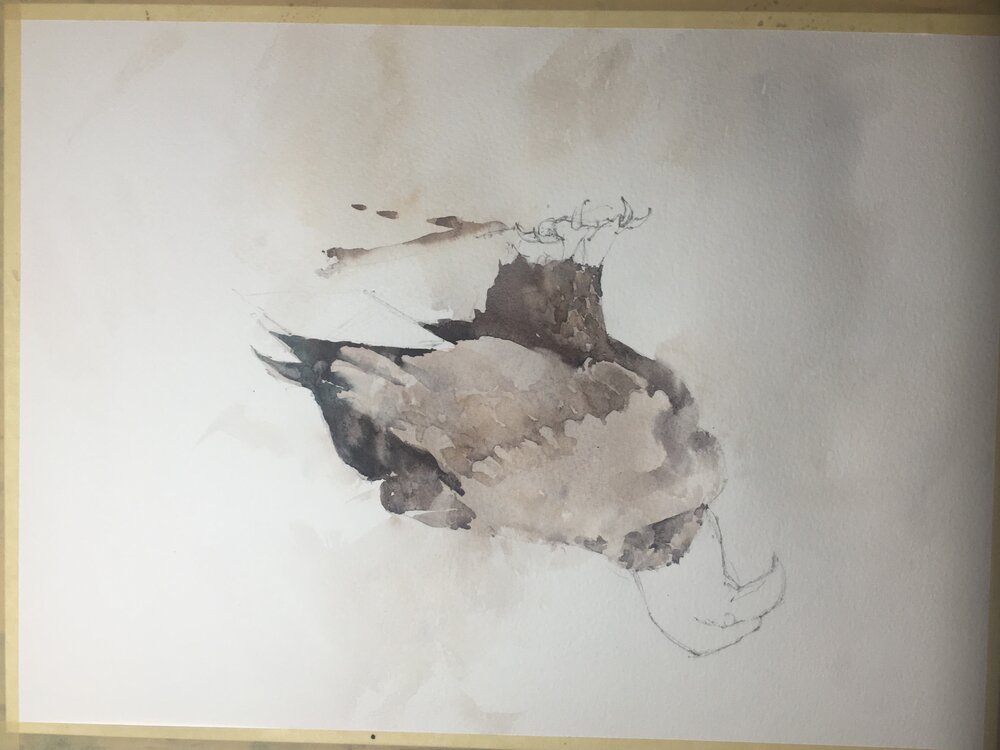 Next stage was putting on the dark shapes. I was a little too tentative here – as they were going on I realized that I’d have to go over them with more color at a later stage but it would do for now. I also started putting in some darks for the lines of feathers on the wing.

The upside down aspect really helped here although I was itching to take a look thinking I must have screwed up by now. But no – everything looked fine.

We’re pretty much done now. I quite enjoyed putting the feather detail in and I think it came out pretty well. I have to say that once I’d turned it right side up this was the stage where the picture suffered a little. There’s a little too much detail – I would have loosened up more of the edges and lost definition in more areas if I’d been painting it normally. But I’m quibbling now. This was a good exercise to do and surprisingly successful.

Here’s the reference – I’m trying to find the right credit…. – Photography by Alia Whipple! From the facebook page ‘Free Reference Images for Artists’.