It’s that time of year again.  It’s the Post Road Art “It’s in the bag” competition.   $33 gets you a bag of materials and you have to work your magic to create something.    This year it was a doozy!   This is what we got :

Prominent in the bag were materials for making poured acrylic paintings.   Now this is something I have absolutely no experience with.   After a bit of googling and YouTubing I worked out that you put a lot of paint in a cup,  pour it onto a board, shoogle it around a bit, drop in some alcohol ink and voila! Painting.

It’s a lot harder than it looks.

I got paint everywhere.  On the table,  up my nose (!) on my tea mug, everywhere.  This is what I finally ended up with :

Kinda cool but I don’t think I’ll be doing a lot more of it.   And what I forgot was that these things take days to dry so I didn’t even get to enter it into the competition.

So what to do?   Birds of course!   I first thought of a peacock but after trying I wasn’t happy.   I next thought of a toucan which seemed like a better bet but I messed up the beak which blew out into a big purple splodge.   This one ended up being the poured one above.

After coming back to the peacock I decided I quite liked it so it was one of my entries.    Since I didn’t have anything to lose I tried the toucan again in a more traditional manner and he came out quite well.  Here he is :

Phew – all framed up and submitted.  Why do I always leave these things to the last minute?

A very muted piece but has a lot of presence.

Sometimes things just work. I wanted the colors to be muted on this one so the stance of the bird, its markings and reflections stood out. And it all came together. Happy camper.

Just fancied painting a kingfisher. Tried to get him nice and sploshy.

So what to do with the rest of the afternoon. Looking for something quirky I found this from a trip we made to Portland ME almost exactly a year ago. So why not? Not sure quite what to make of this one yet.

I was quite pleased with the first version of this but then I had a crazy idea of trying a second version on Yupo paper. This is a synthetic paper which doesn’t absorb paint or water which means the paint behaves in a completely different way to cotton paper.

I had a blast with this and, due to the non absorbent nature of the surface. the colors remain bright and vivid. There were regions where the paint just didn’t stick at all – see on the left – but it was definitely worthwhile having a go.

I had a final experiment on hot press paper (4th in the collage). I don’t think I’m done with this scene yet but I’ll take a break for now.

This is another scene I’ve been wanting to paint for a while. Colors came out well and also the sense of late autumn afternoon sunshine. 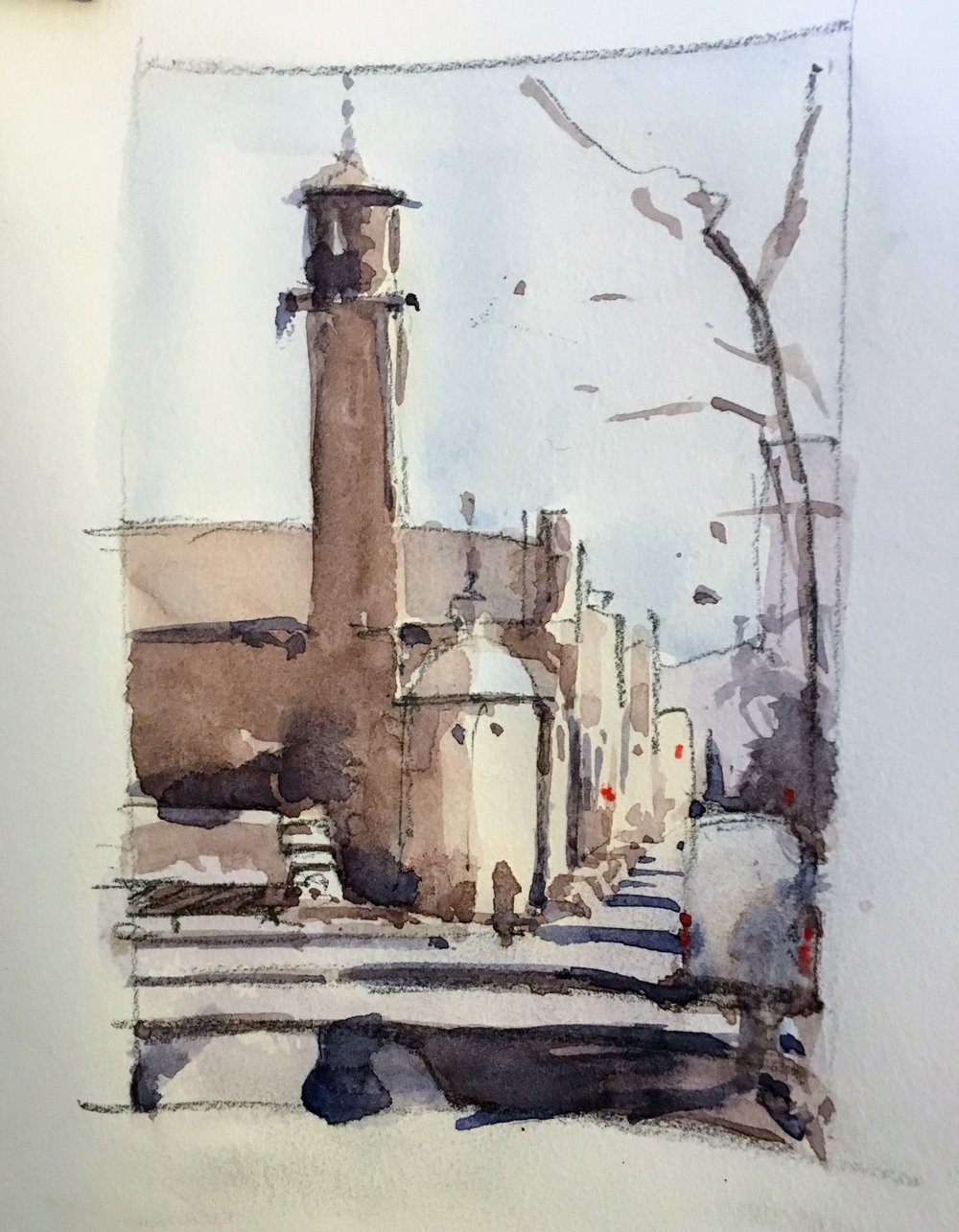 The past few days I’ve been learning from Joseph Zbukvic’s painting.  After four days of this I was a bit jaded and losing enthusiasm.   It made me think how much of the satisfaction of painting is putting down your own interpretation of a scene.  Not just a straight representation but how you view something and which elements interest you.   All the time I was doing the Zbukvic copies that part of my brain was switched off and thus a big part of the joy of painting.   And no enjoyment = bad paintings.

So I was riffling through my back catalogue of ‘things I’d like to paint’ and I remembered our visit to San Jose last year.   I didn’t have any sketches but I’d taken some photos and one of the Basilica looked like a good candidate.   Here it is

It’s not great as is but there’s lots I like.  The bright sun on the church walls,  the general shape of the building,  the palm tree.   And overall is the sense of California sunshine.

There was a fair bit of rearranging and invention.    I took out various pieces – the tree, the front car and a lot of the signposts.    There was also some rearrangement – the background building encroaches on the church so I shifted it to one side.

Off I went and tried to remember the guidelines :

– Keep those values fairly constant within the big shapes.

– Economy of brushstrokes – no dabbing!

I also moved back to Fabriano Artistico paper.    I generally prefer this to most other papers.   The color seems to flow better across the surface and the colors end up brighter.    Arches in particular soaks up water like crazy which can dull colors when it dries.

So – mid way through what did we have?

Not too shabby!  Shapes are good,   Values are pretty good,   Darks are being connected so the cars don’t look stuck on.   And most importantly I was actually enjoying it!

There was one thing, however.  The shadows between the pillars on the front of the church were bothering me.   So in the evening, sitting downstairs with the ipad,    I imported the photo and overdoodled on it with the procreate drawing app.   I pushed back the shadows and added in some elements I planned to add in in the next stage.

Ha!   I was pretty pleased with this.    Definitely need to lift off those shadows and my plan of a large foreground shadow fitted in well.

Bird day today. Need a rest from the cityscapes. Quite a successful quetzal although this was the second go.

Well that was one hell of a day. Sometimes you just want to pack everything up, put it on ebay, and take up golf. And I hate golf.

But let’s go through them anyway. Number one : 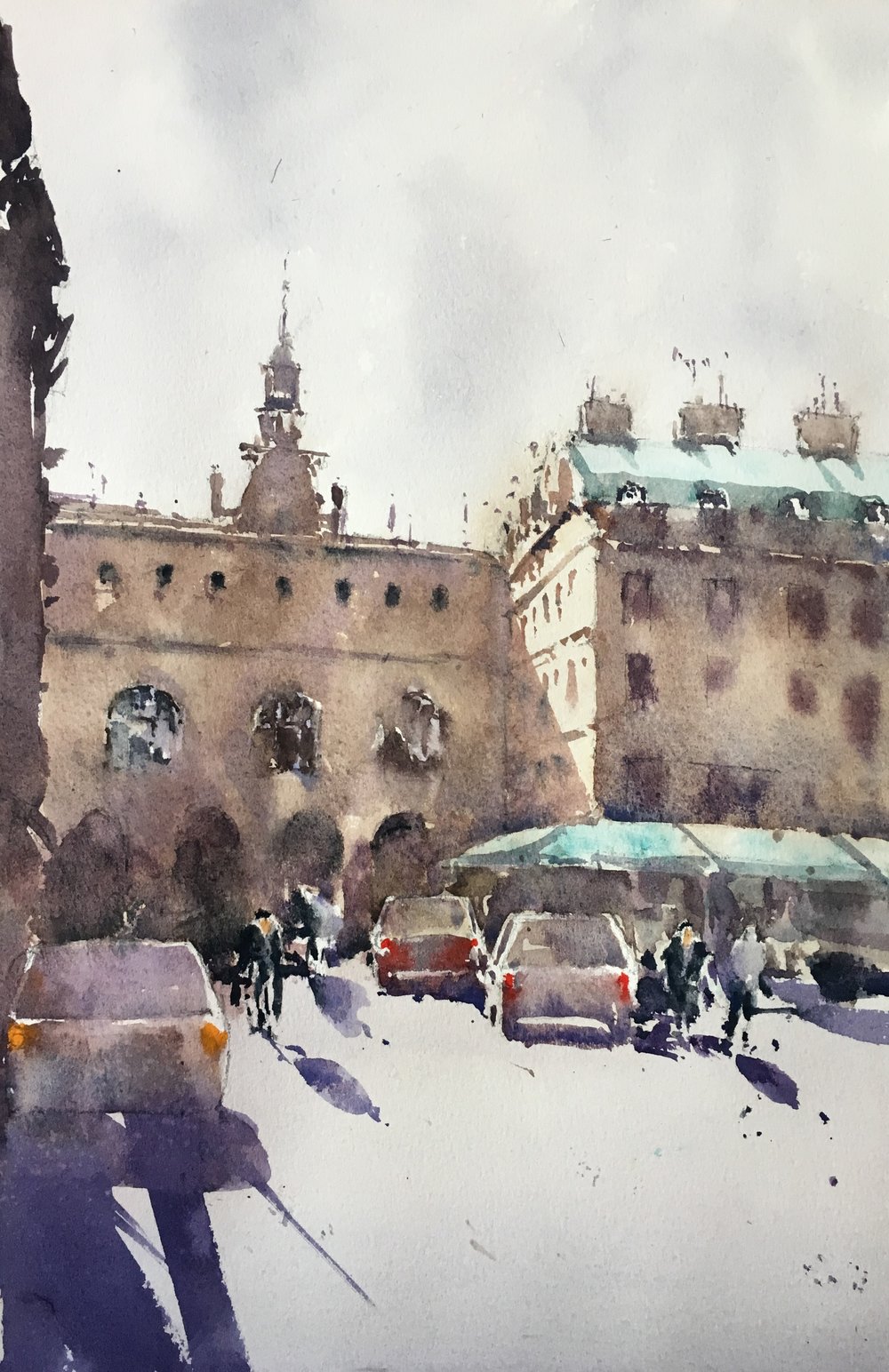 This was probably the most successful. Nice light on the sunlit part of the building and the foreground shadows work well. Not much else to recommend it though. 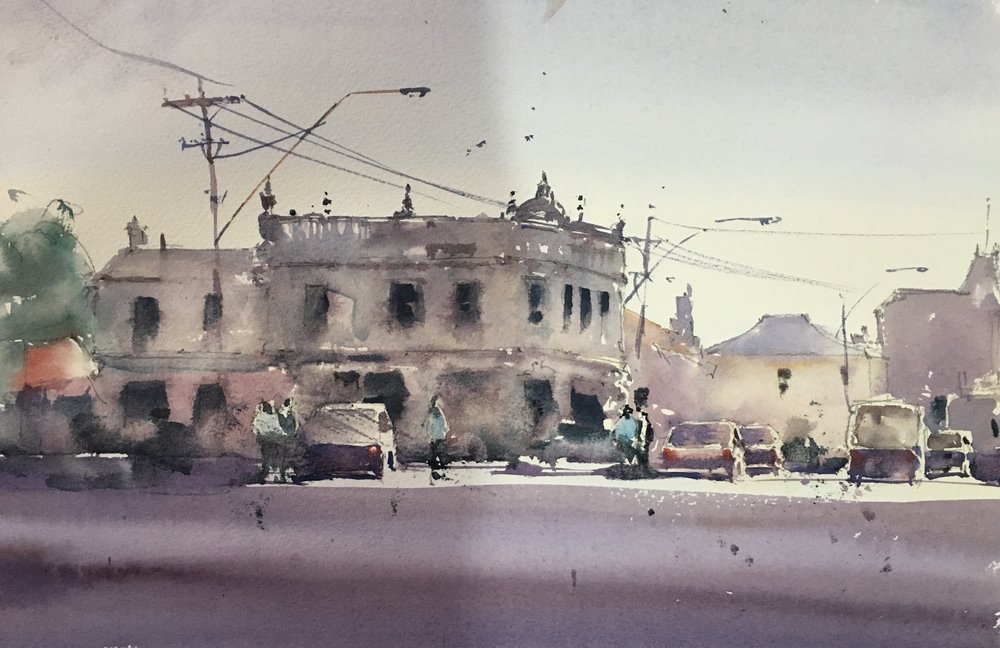 Blergh. Not much to say about this. Didn’t enjoy it one bit.

I’d been quite looking forward to doing this as lighter buildings with dark accents are generally easier. It was not to be however.

The main thing that is so frustrating is that I have no idea how to improve these. I know they’re bad – I just can’t see what to change to make them better. 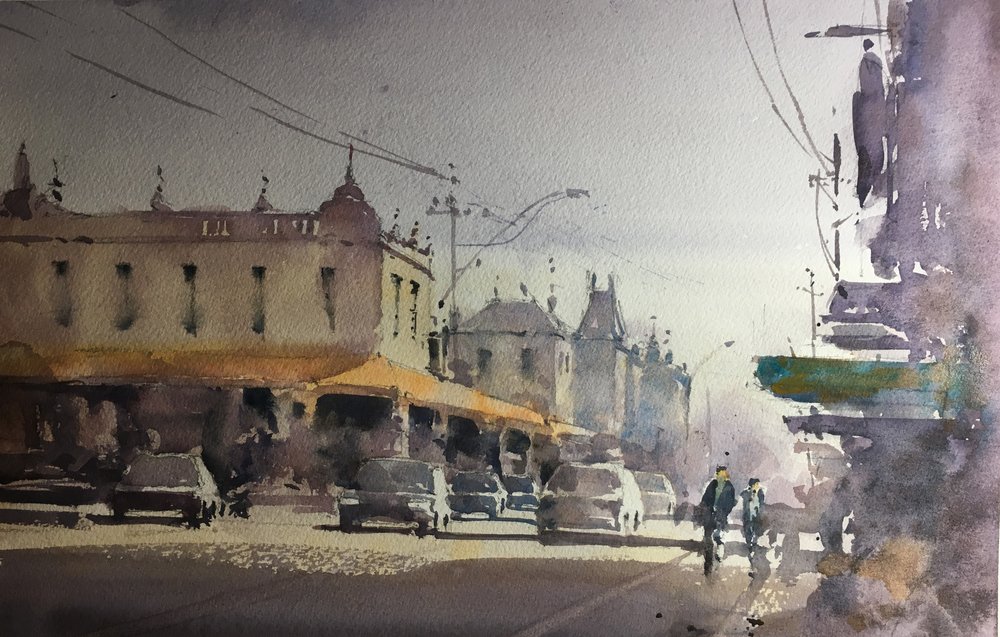 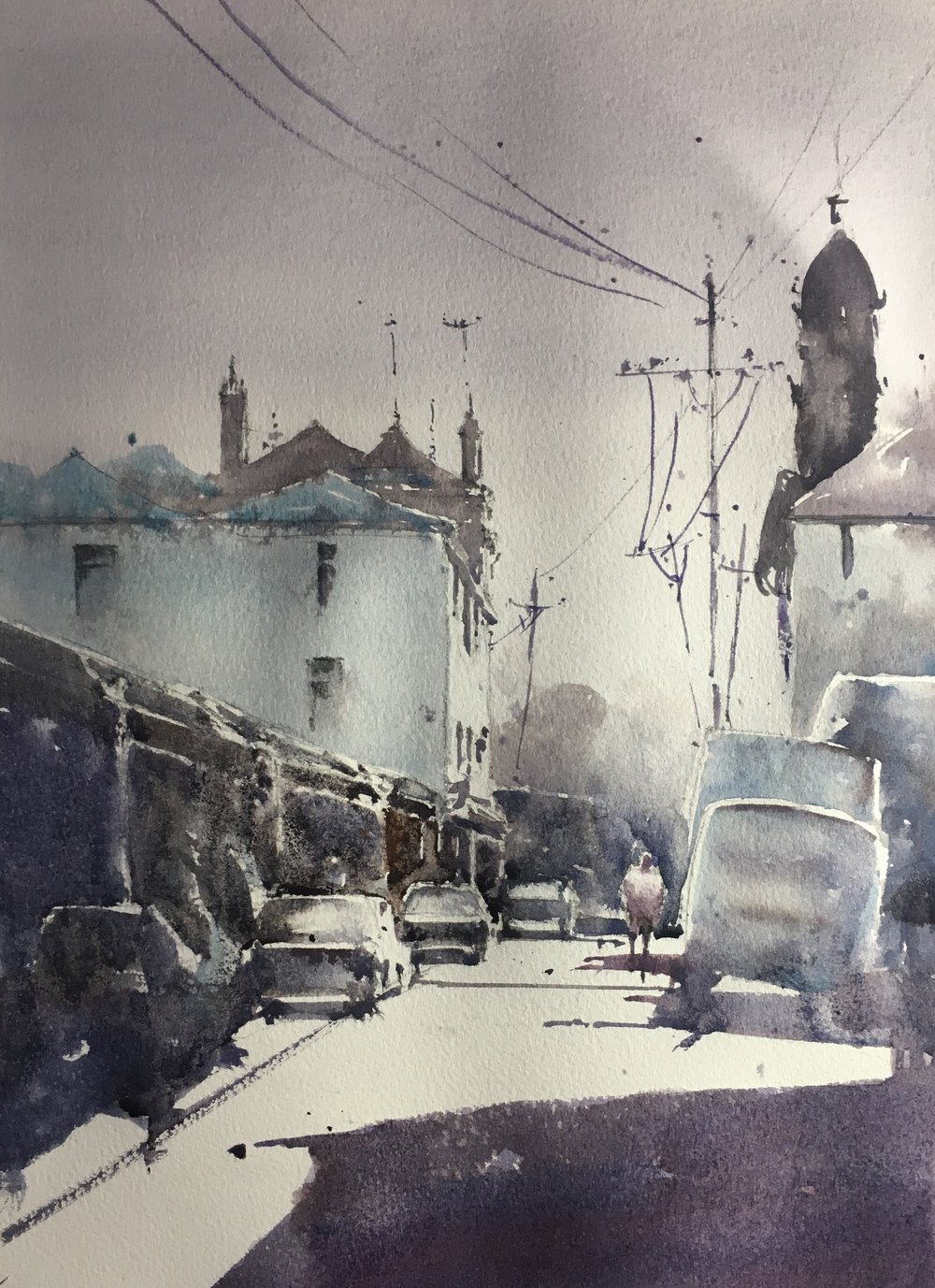 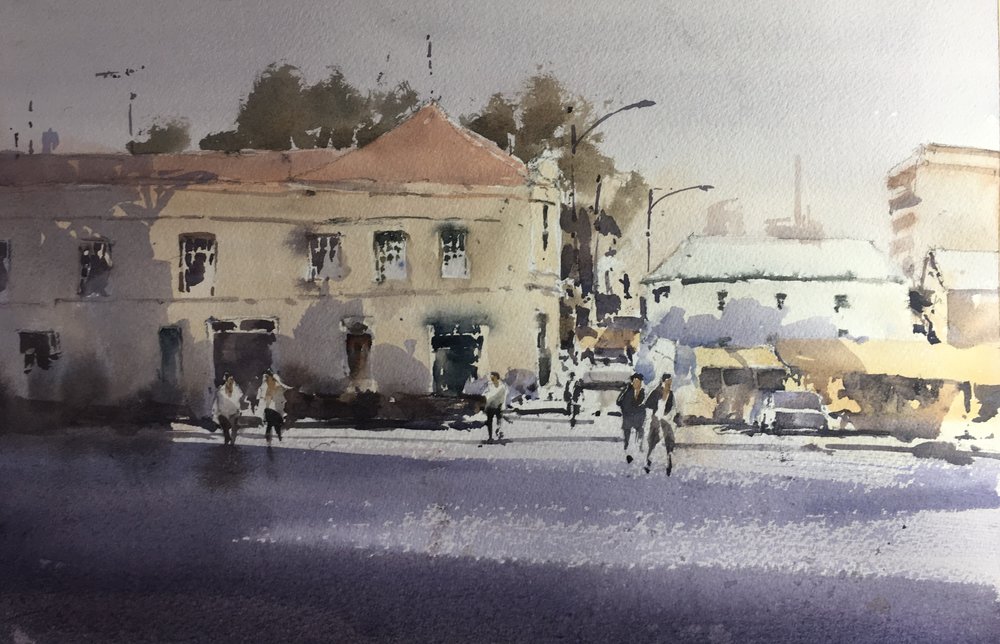 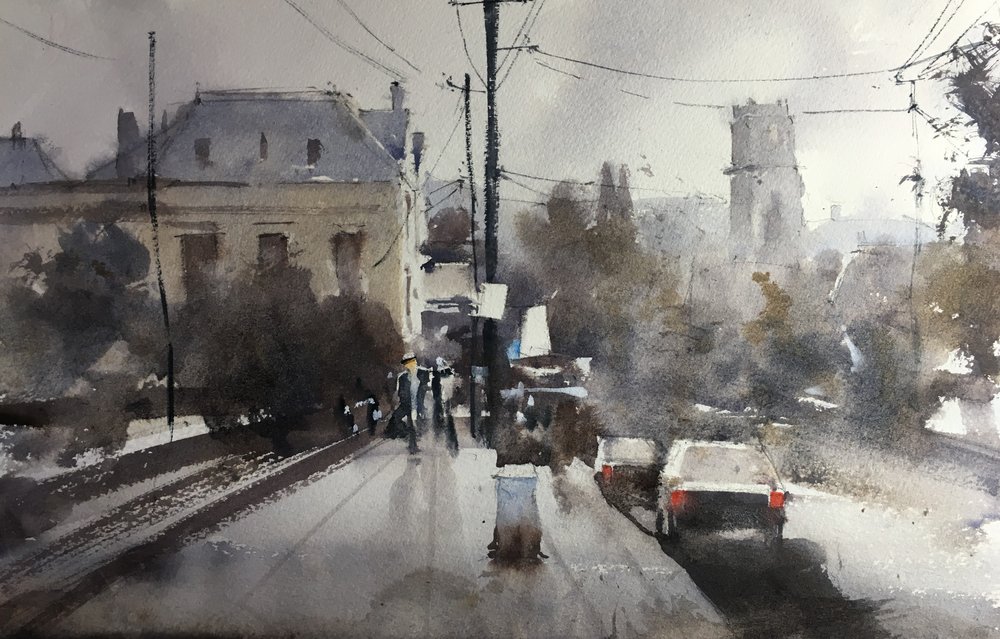