Finished.   Not a patch on the other one unfortunately.    I’m thinking about doing another with a much more muted palette.

So this is number two on my Harvard Yard series.   Not going too well so far.   It’s getting very tight and I’m at the point where I start to panic and just splash paint about.  Never ends well.  Too dark to paint now so it will have to wait. 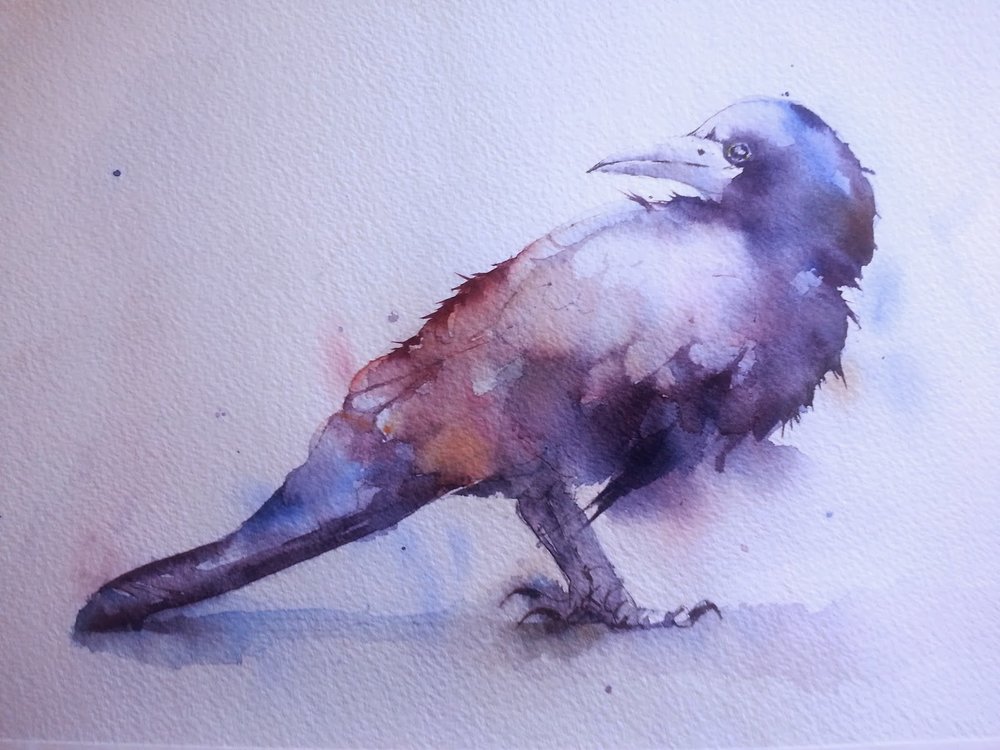 Enjoyed this one.   Especially the edges of his feathers.

This is the first outing for my planned Harvard series.   Step-by-steps below. 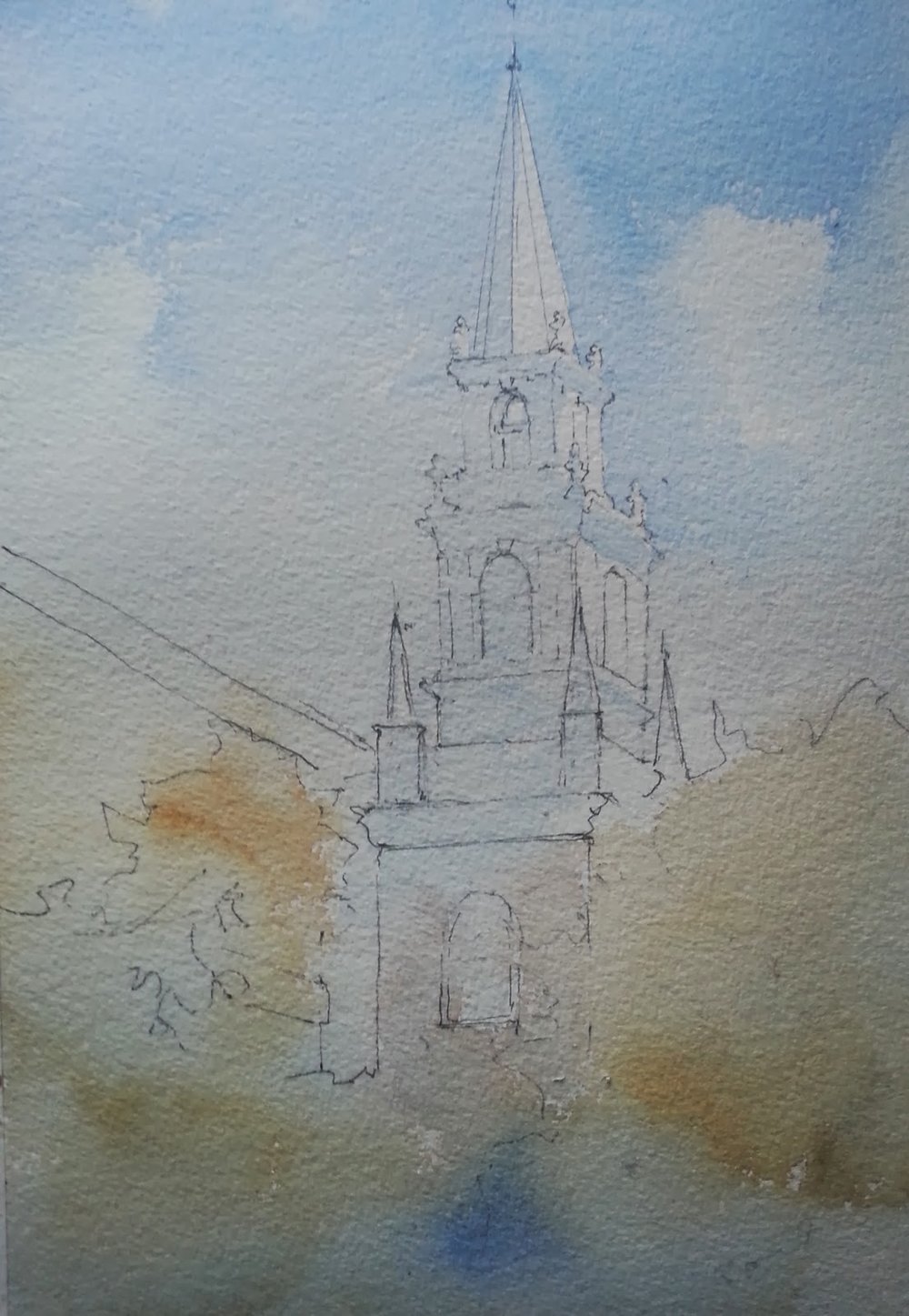 Layer 2.   Strengthening up the shadows on the tower and putting more color into the foliage.  This is where I start to get nervous – I want to strengthen up the shadows without losing intensity.  The next layer is crucial. 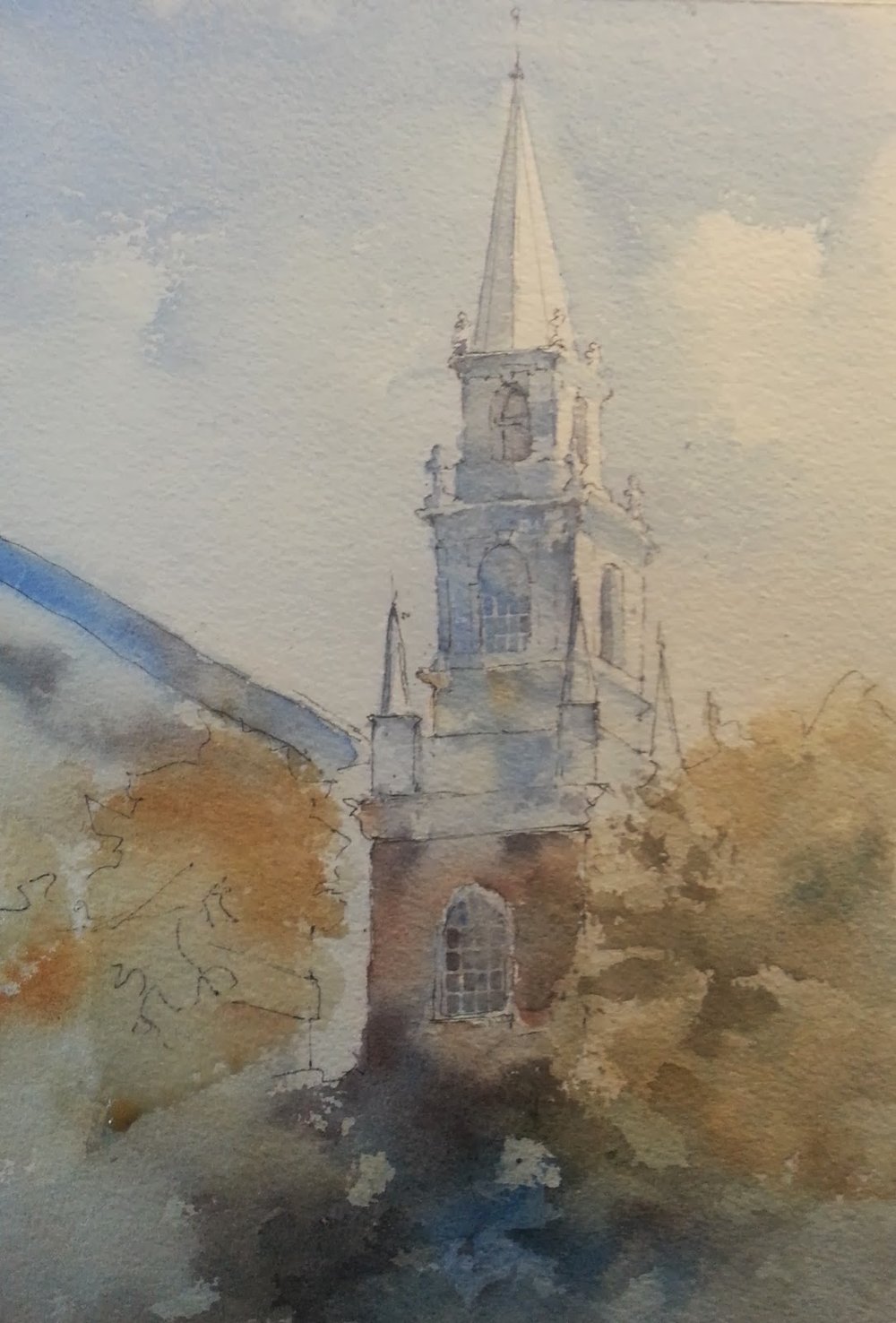 Layer 3.  Have I mucked it up yet?   What I need to do now is add in some strong darks without losing freshness.   Those trees are worrying me too.  Fingers crossed. 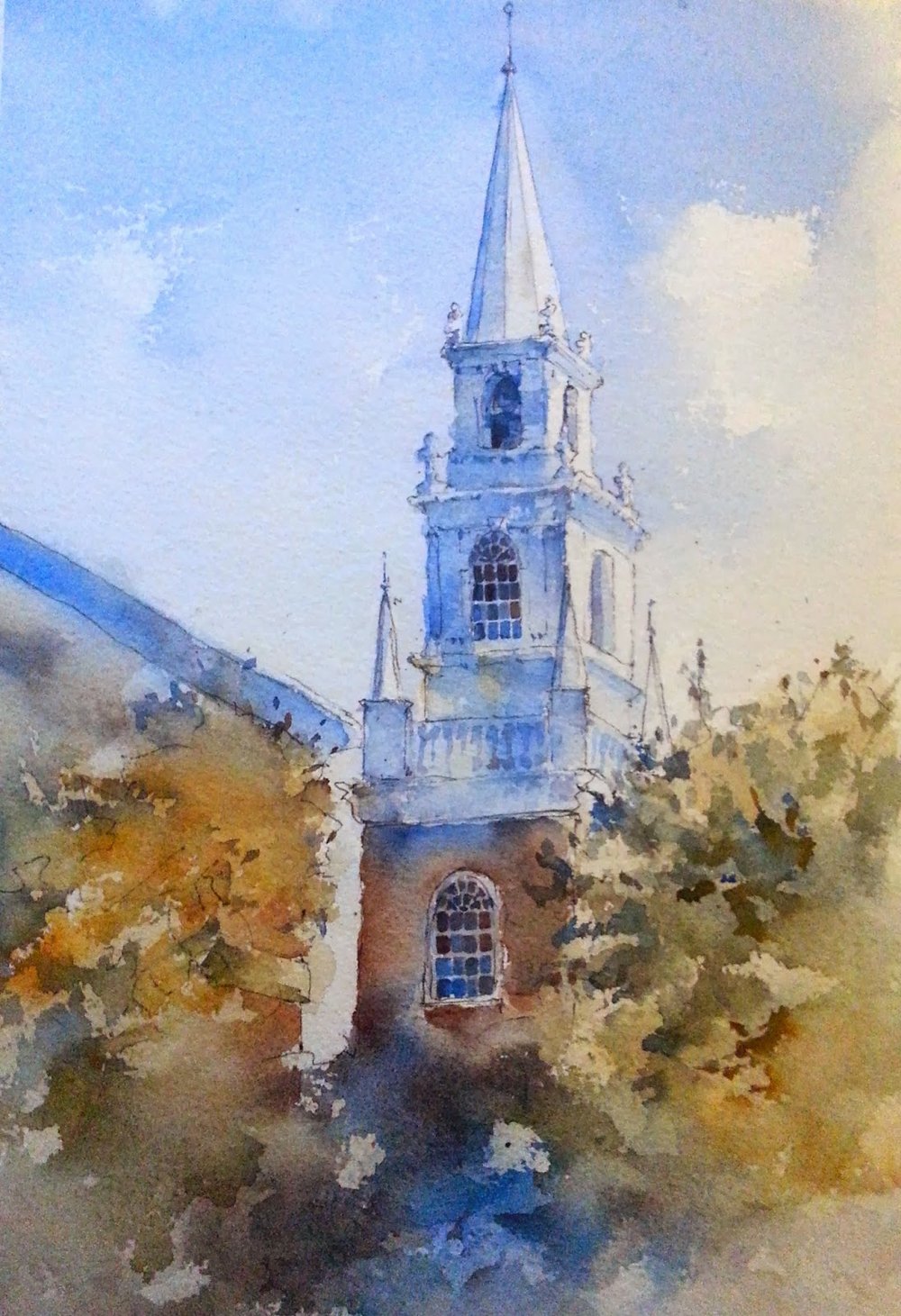 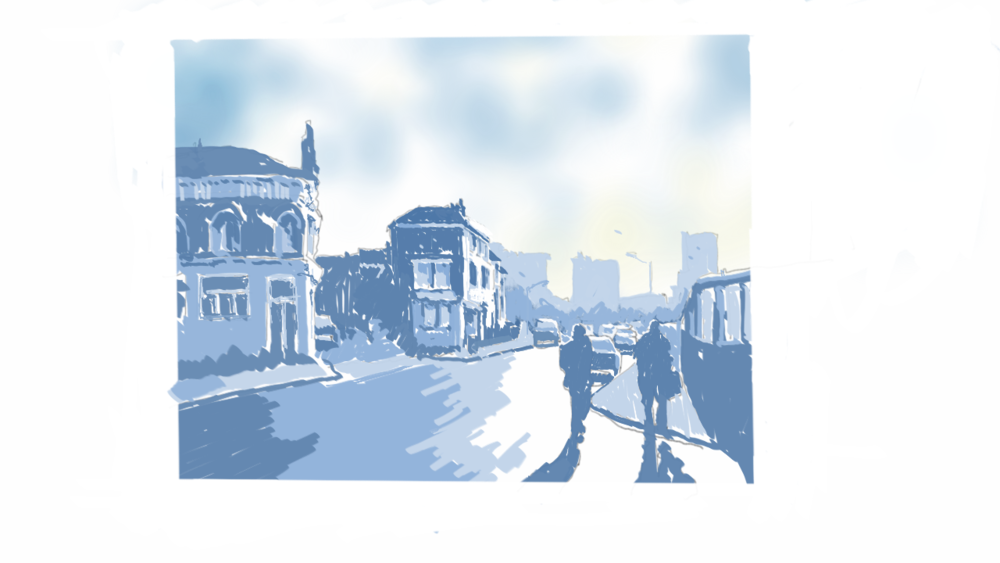 A final go at Coldbath street on the Wacom tablet.  I’m a little happier with this – I limited myself to 4 tones and played around with the photo in Photoshop to get a better idea of the tonal range.

After my last attempt at this London scene from
treeshark
I wanted to try again and take more care this time.
First the drawing which turned out pretty well. 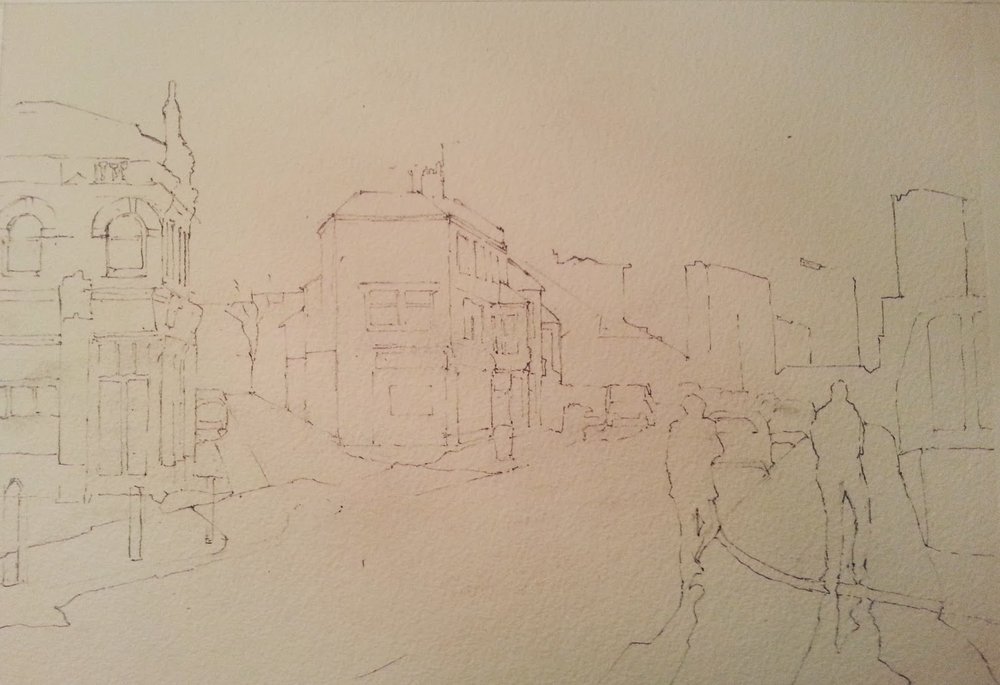 Next the start of the washes.  I put the sky in first and dried then I put in the background buildings.   The middle set of buildings came in next with some warmer colors and more crisp work for the far left building closest to us.    Finally the figures in the darkest tones.

I was reasonably happy at this point. 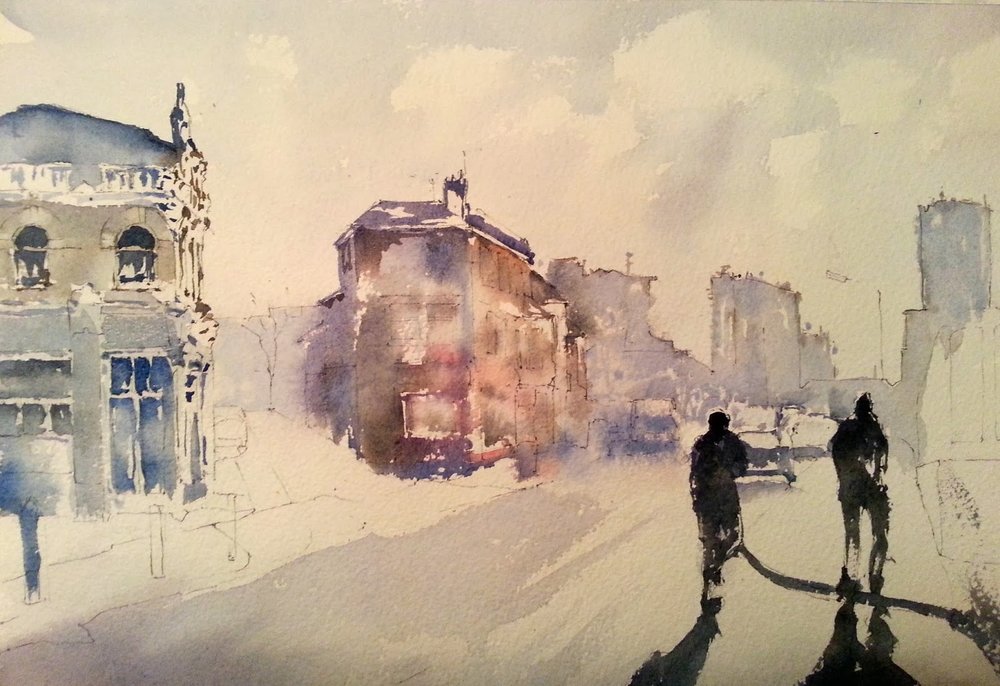 I continued on but things didn’t go so well.   Here’s the current state. 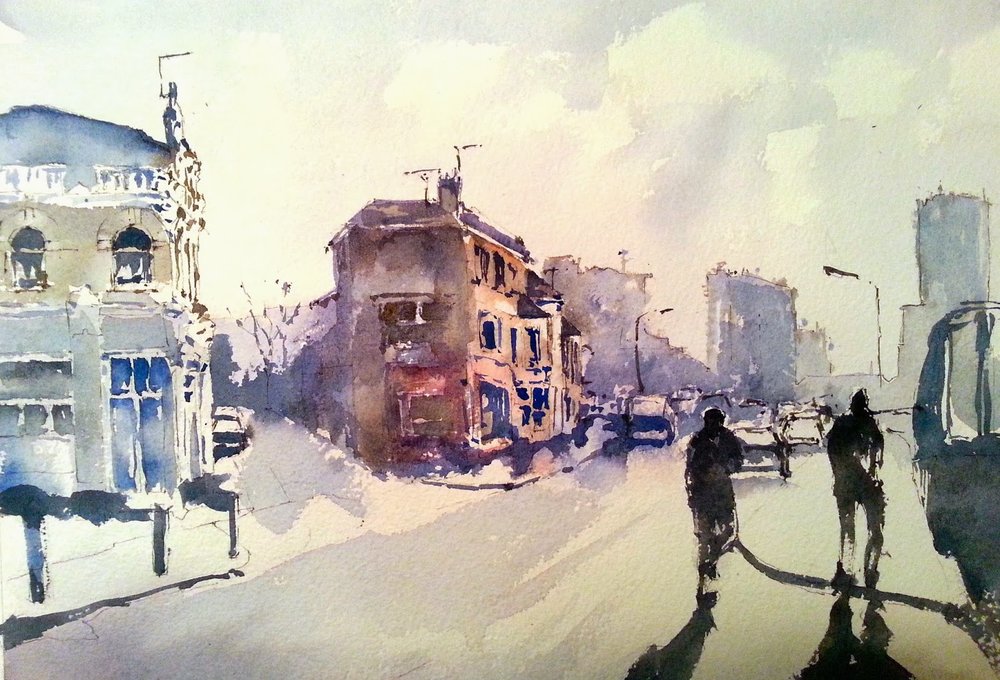 The middle building ended up muddy again and the darks look out of place.   It’s not strictly finished but I don’t think I can do much to improve it now.   This is hard!!!

I subscribe to an art DVD club and get sent 3 DVDs per month.   It can be hit or miss but there’s usually one in the batch that is worth watching.   This month I received a Birgit O’Connor landscape DVD.  Birgit is probably more known for her close-cropped flower paintings but this one showed how her wet-in-wet technique lends itself to other subjects.   She works with very wet paper and large (#30) brushes to apply color.   She lifts and rotates the paper to blend colors to great effect which results in large smooth washes.

This was me following along on her first demo.   Sky and mountains look good but the foreground lost its way a little.   Good fun though. 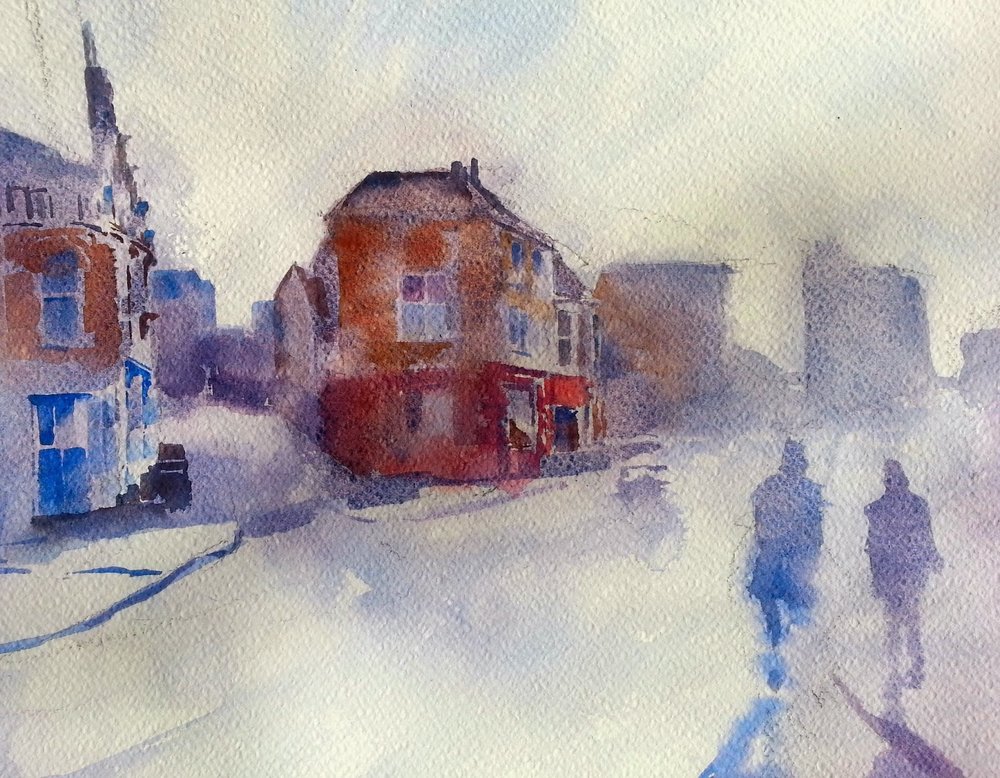 Trying to get back in the habit of painting without worrying about the result.  I also need to get away from the sketchbook and onto some larger pieces.
This is a pretty ambitious London street scene (picture shamelessly stolen from Mr Shark over at treeshark.com).   It has strong contrast and a lot of detail and it will be difficult to pull off. 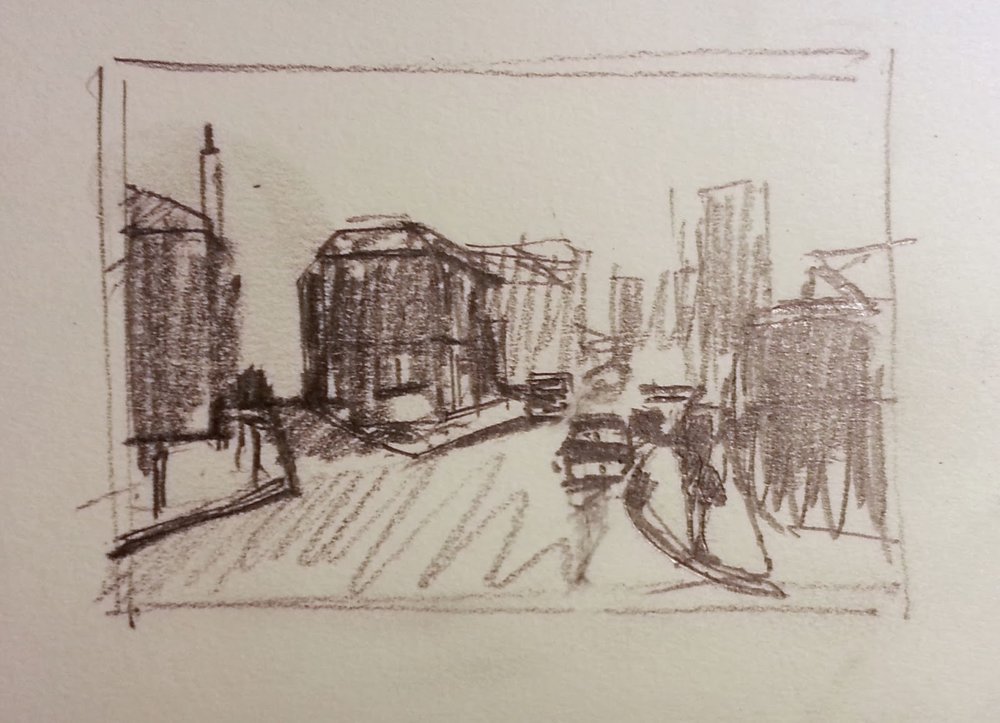 First a thumbnail sketch to work out the tones. 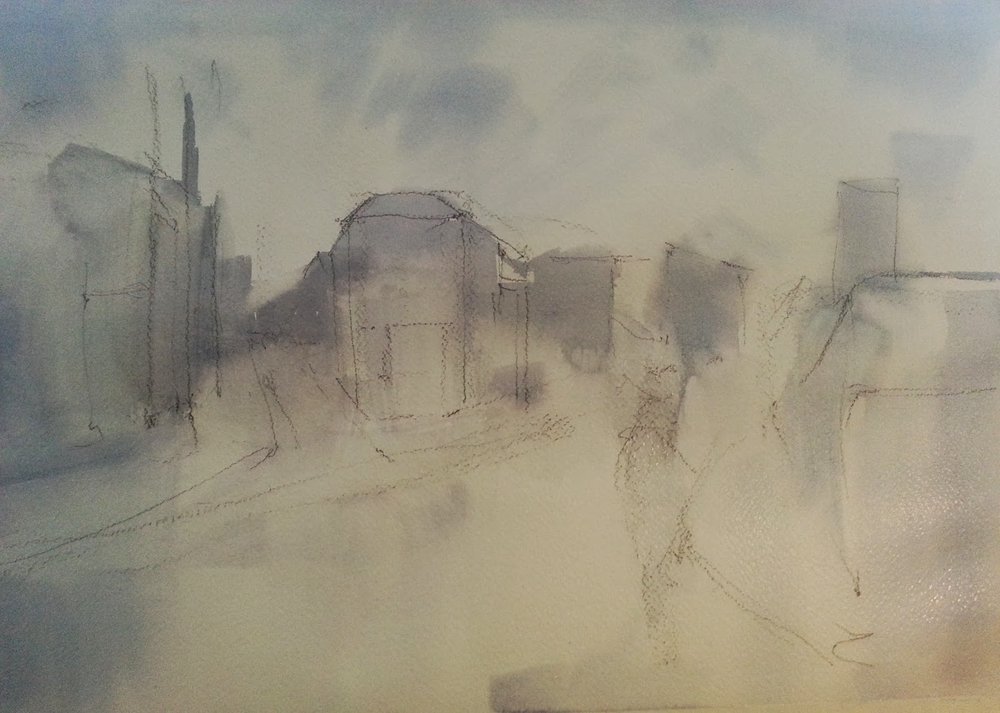 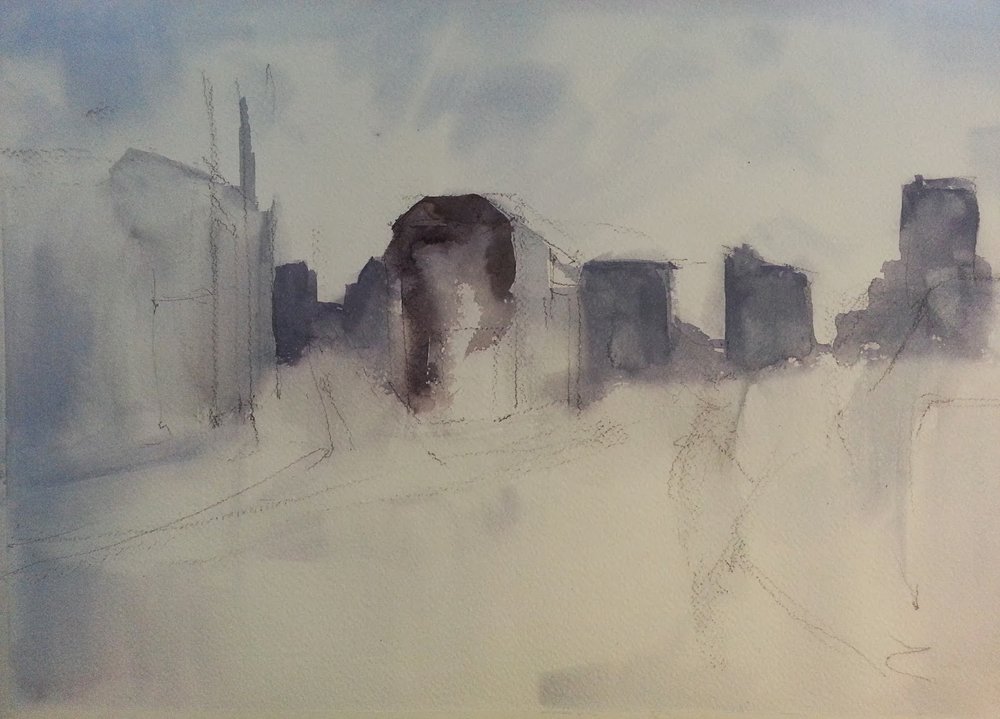 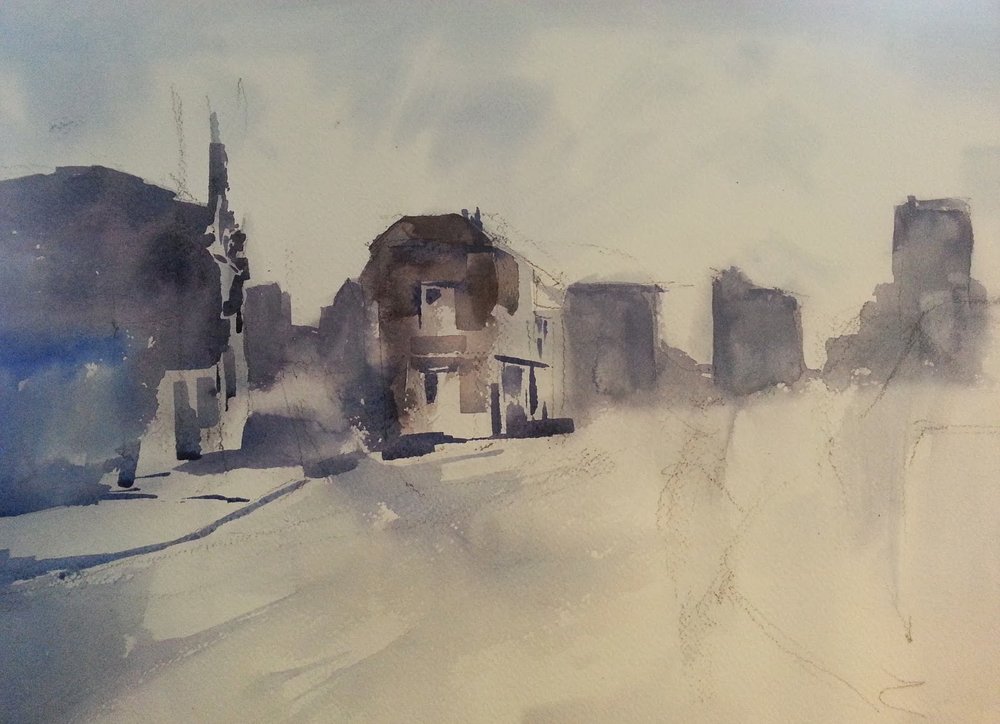 Start of the  details here.   I’m resigned to failure but will struggle on. 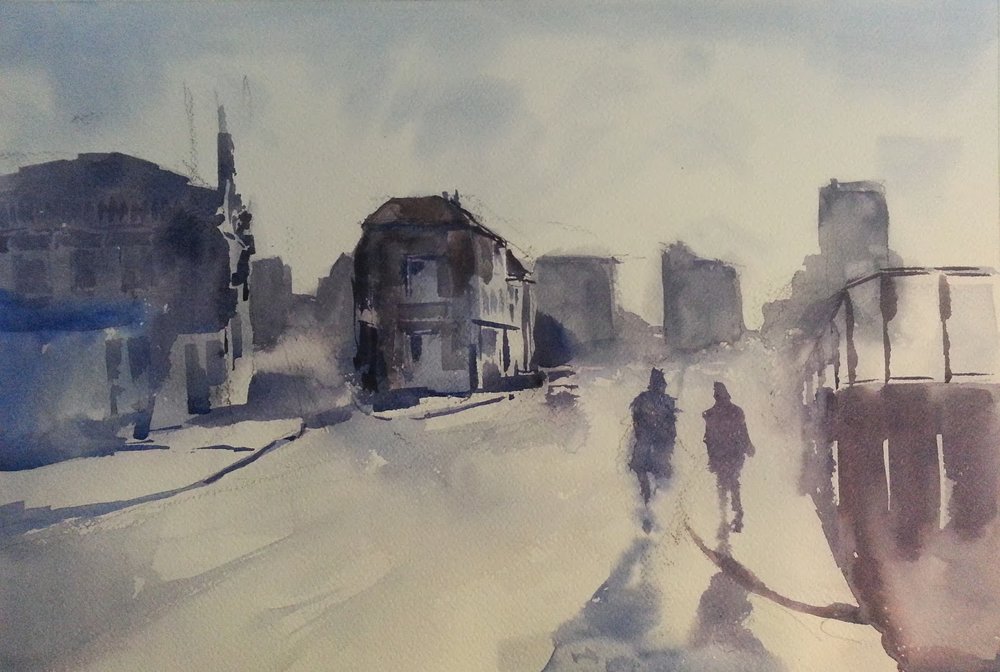 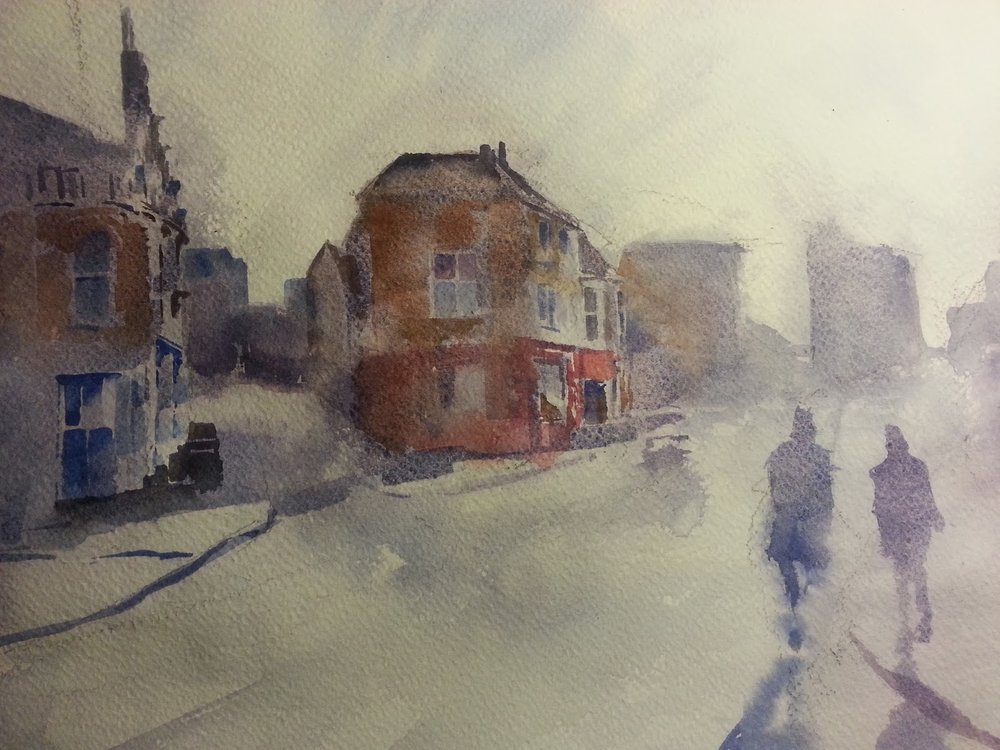 Ok maybe not.    I dampened and wiped off a lot of the dark lines, slowed down and tried again with some color.   There are some good parts but this is pretty much a lost cause now.

Tried a new photo in daylight and cropped.  I’ve done my usual trick of ending up with the focal point bang in the center again.  Although it doesn’t work as a whole there are parts I’m pleased with.  Suggesting the window detail and the roof detail in the houses has worked better than I expected for instance.   But in hindsight I attempted something much too complicated and expected to dash it off in an hour or so.  I think I’ll come back to this scene again but select parts of it to paint rather than the whole thing.