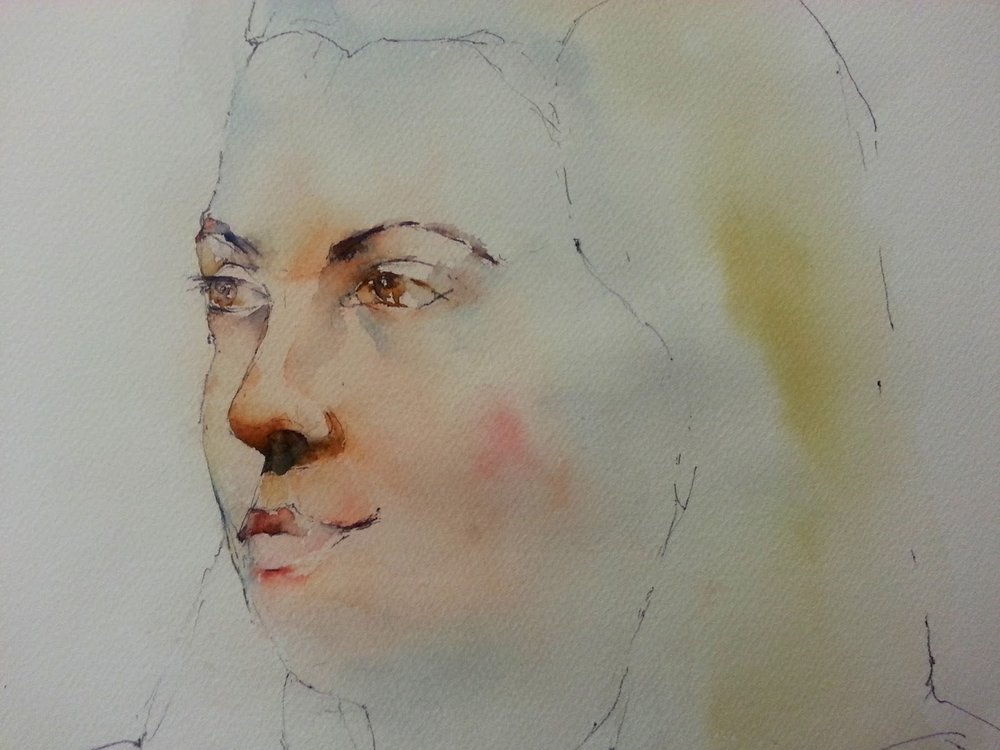 My results on day 1 – the full story is below. 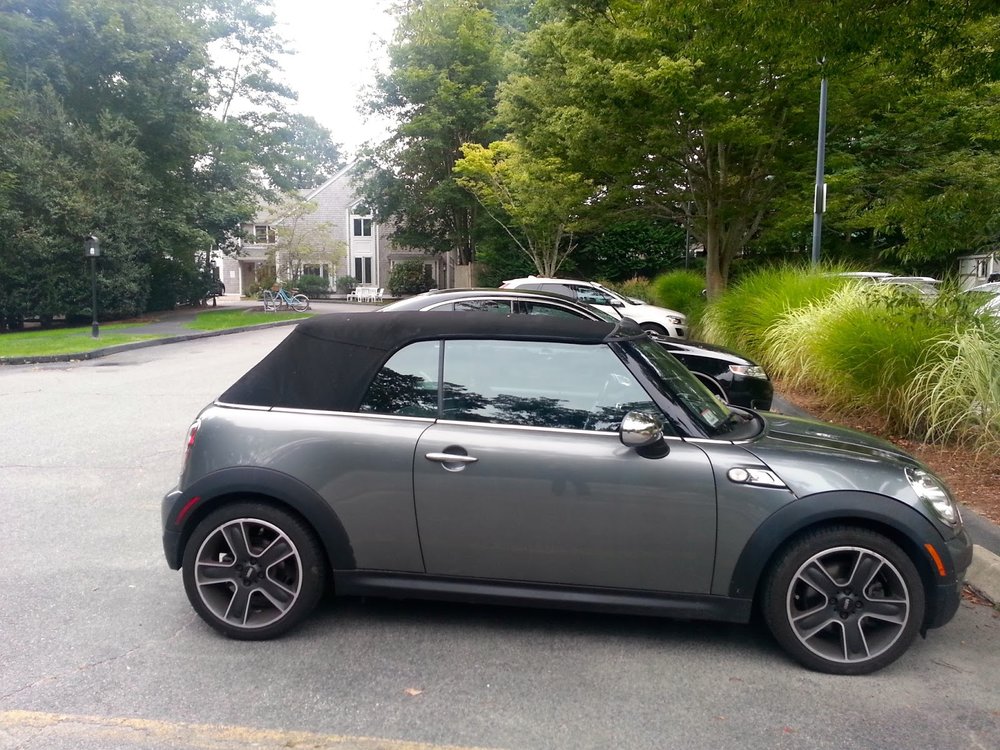 So the day finally arrived.  Boris was loaded up and at 8am off we went to Falmouth Art Center
I was almost the first there – we wondered whether we’d have to paint the ladder but it was only there to adjust the lighting.   The Center is impressive – large and airy and obviously quite new or at least newly renovated. 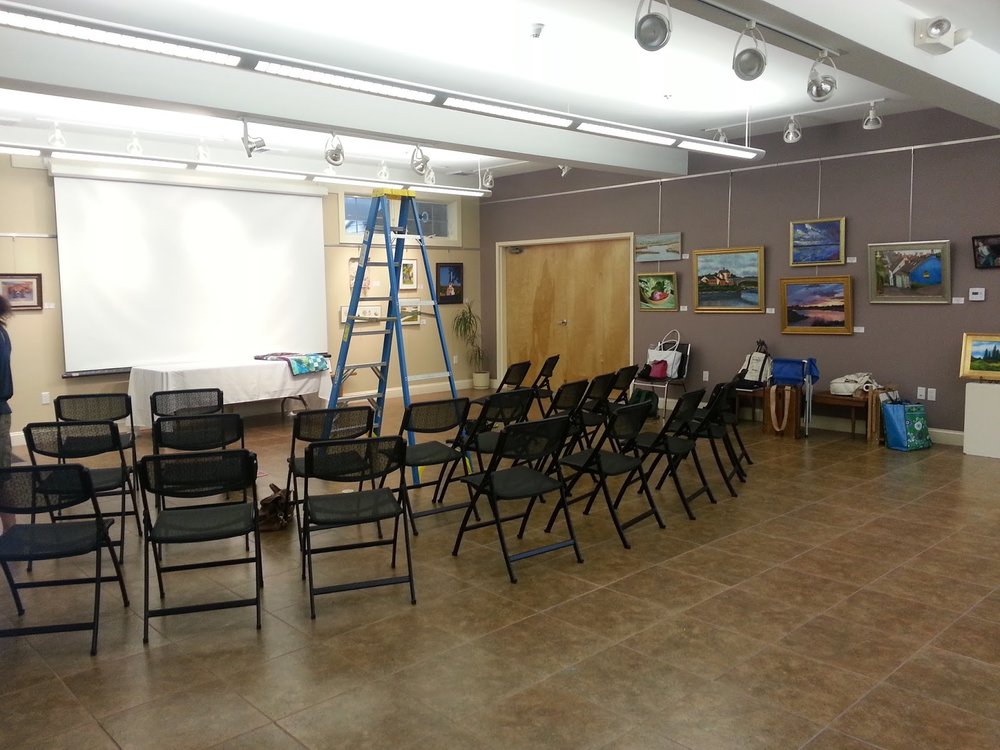 After coffee and complimentary bagels Judy and Charles arrived.    Judy is obviously the organizer and keeps everyone informed as to what is going on.  She shuffled us around a bit so we could all see while Charles settled himself in his chair in front of his easel. 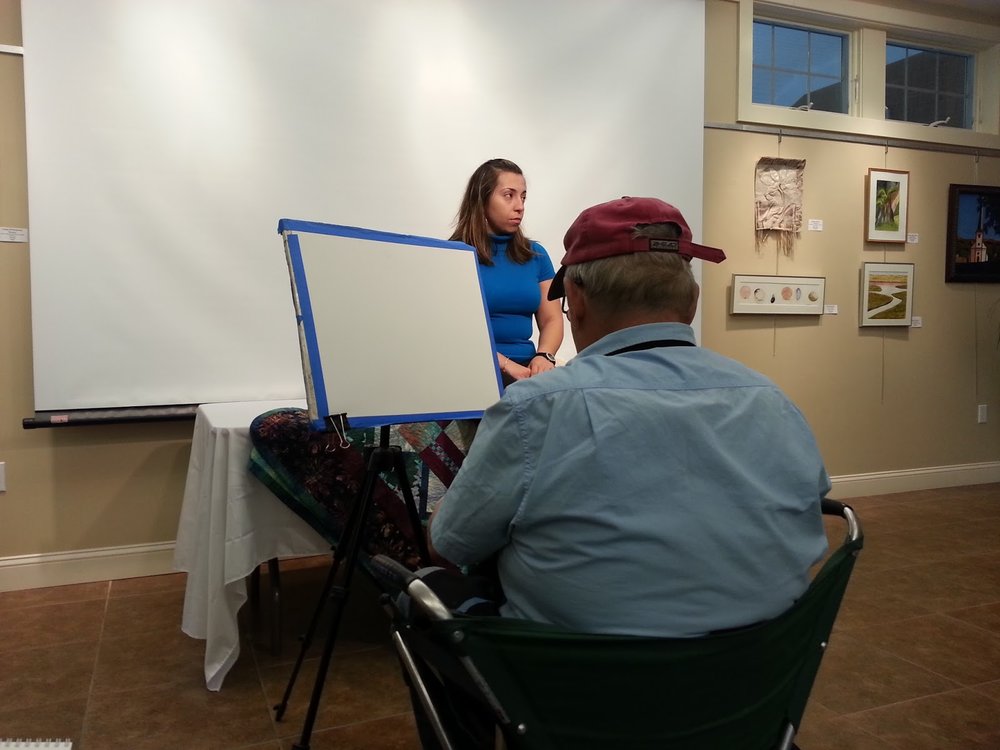 Our model (Katrina – like the hurricane) sat in 15-20 minute chunks while Charles drew and explained what was going on.  Having read his books and watched several of his videos the information wasn’t completely new but there’s nothing like actually seeing someone draw and paint who knows how to do it. 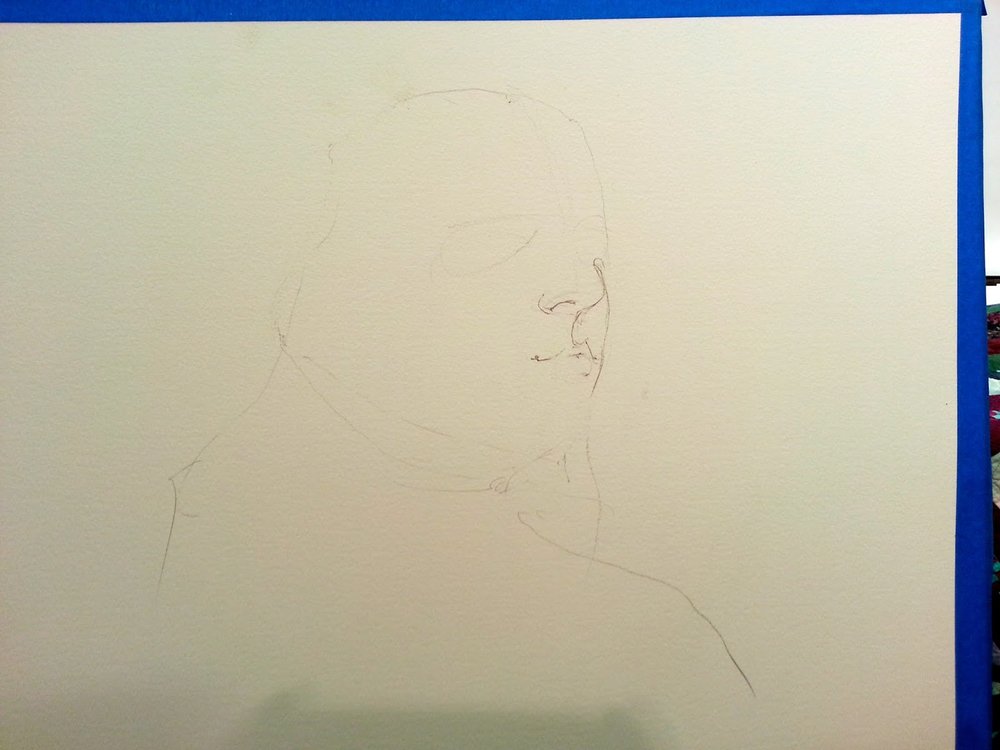 He went surprisingly slowly  – this was after the first 15 minute section with just a rough outline of the head and more detail of the nose and mouth. 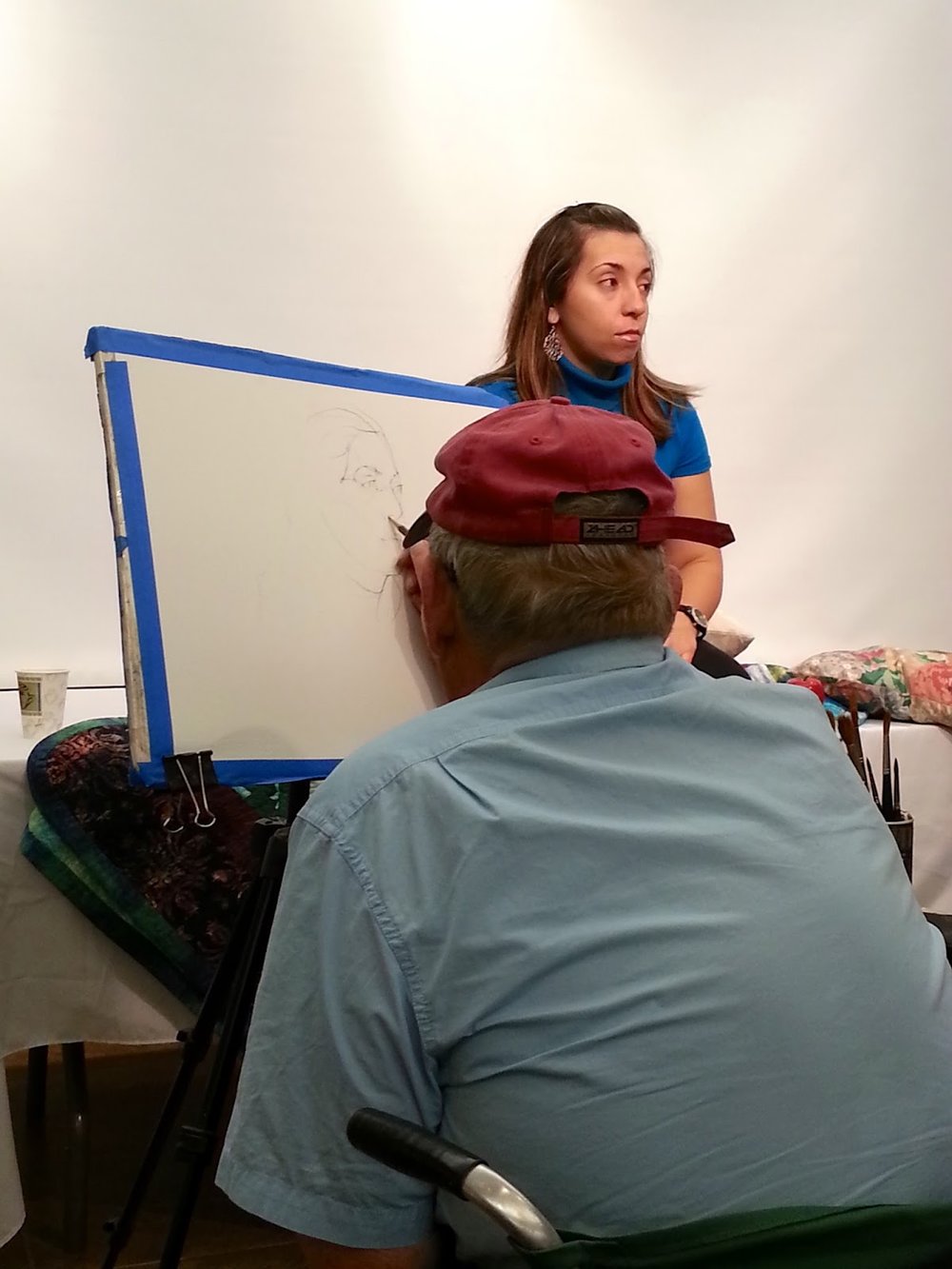 This was after 30 minutes – most of the time was spent on the features with the hair and shoulders put in in a couple of minutes or so.    Looking closely at the drawing there are surprisingly few lines.  He strongly urges us not to ‘sketch’ with multiple feathery strokes but put down decisive lines.   Even so the sparseness of the drawing was surprising.

The time went incredibly quickly.  I thought only 5 minutes had gone by when the buzzer for the first 15 was up.    Amazing how absorbing watching someone else draw is 🙂 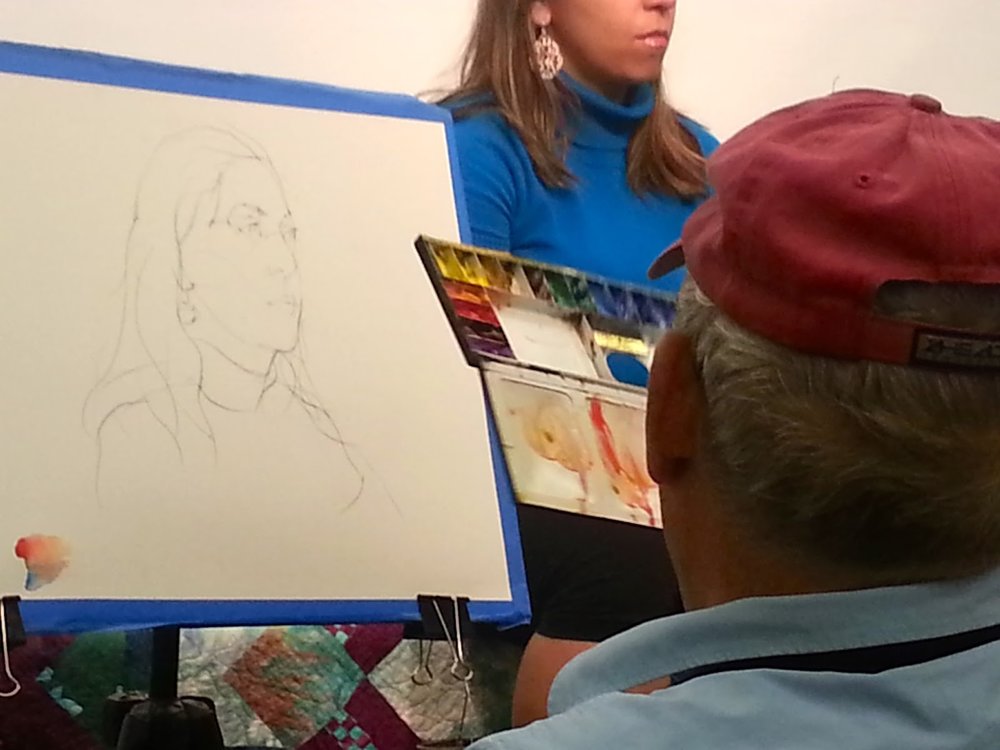 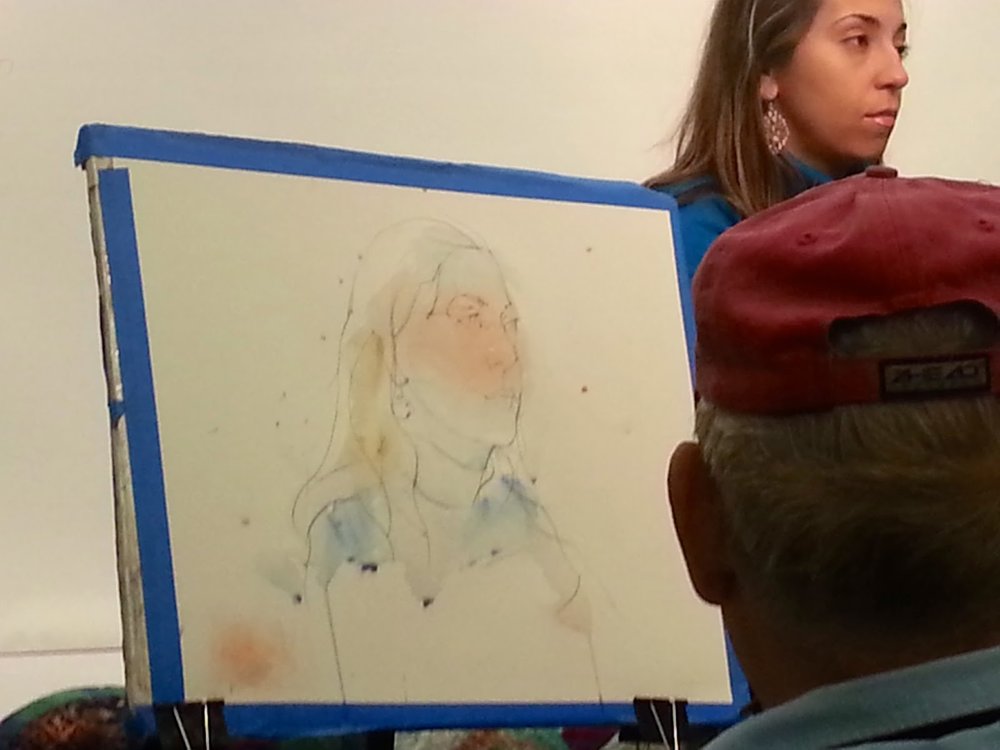 Finally onto the  painting.   After saying that he usually doesn’t do an underwash he proceeded to do just that.  I can’t remember the rationale but it doesn’t really matter.   He used cadmium red, raw sienna and cerulean blue and a fairly large number 14 brush to put some warmth into the face and some color into the hair and sweater.   With these washes he didn’t keep to the outline but pushed the washes into the surrounding areas. 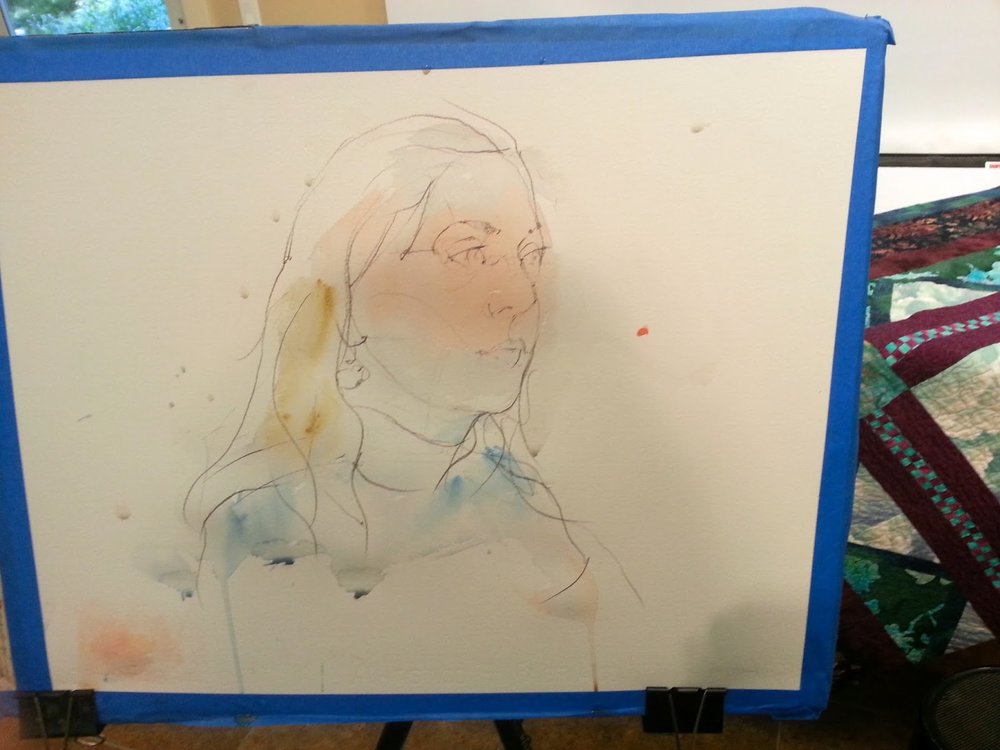 After another break and when the wash was dry it was straight into painting the features.  He said he usually starts painting at the same place he starts drawing.  In this case it was the nose and mouth but in other cases it could be the eyes.  He was careful to stress that there was very little water in his mixes and it was interesting to see how he got value changes.

He started by putting in the cast shadow under the nose in a dark mix of cad red,  cerulean and raw sienna.   He then took a slightly damp brush and pulled the paint out into the other areas of the nose and face.  This enables him to get unified color but also a good range of light to dark. 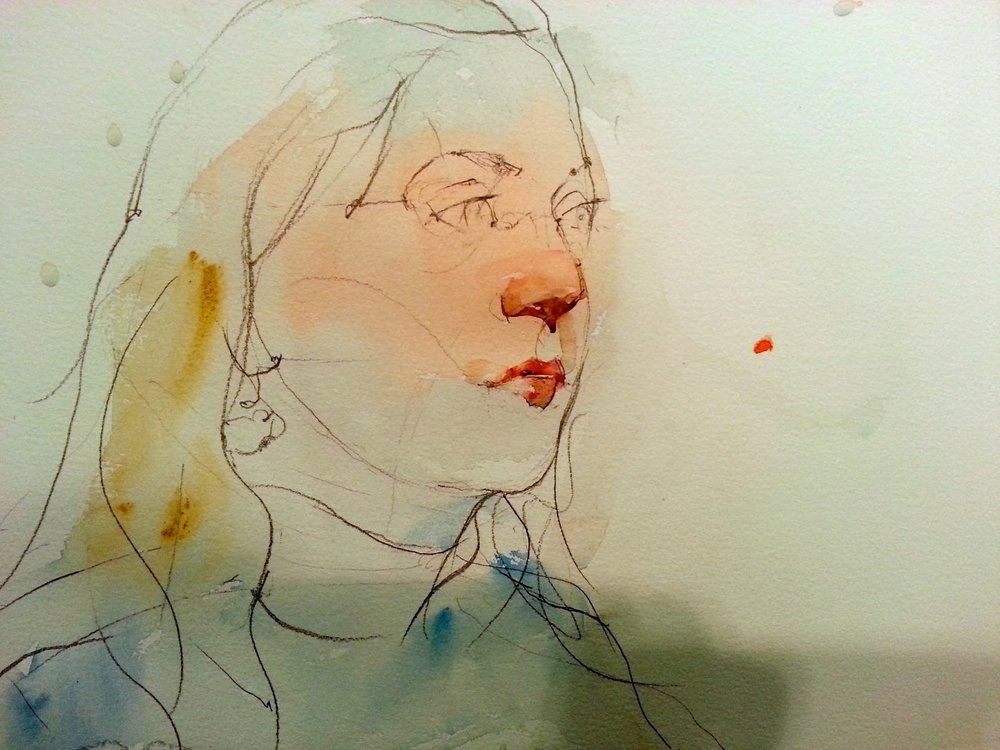 He paints as he draws – extremely slowly and carefully.   The nose and mouth stage above took another 20 minutes.   As with the drawing he stressed that we shouldn’t follow the outline but leave gaps and soft edges to indicate form.

The next two parts were the eyes and then the planes of the face.   For the eyes he went straight in with the dark of the lashes and the iris.   The iris he put in in small dots and leaving some white of the paper. Then he goes back in with a clean damp brush and softens areas by pulling out the pigment.   Interestingly the white of the eye he put in as quite a strong raw sienna.  It looked out of place when it went down but looked fine when the rest was filled in.
The side of the face he put in with an extremely strong and apparently dark mix.  Again this dried much lighter (although I’m not sure it was completely successful). 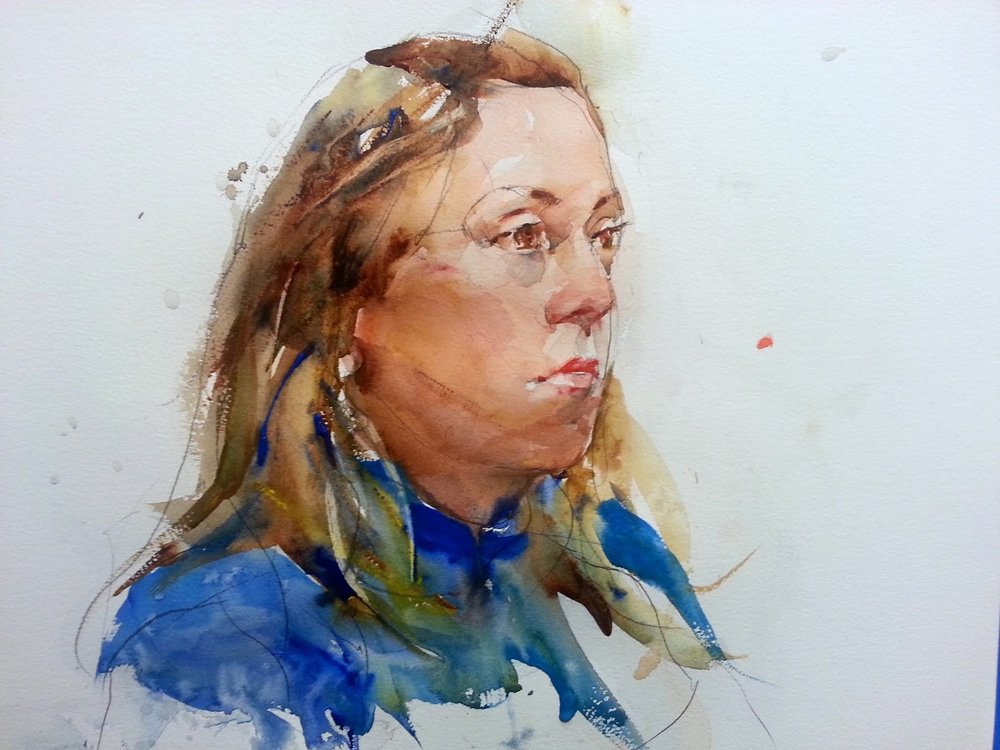 Finally the hair and the sweater was put in.  This was done comparatively quickly and he made good use of his fingernails to scrape out the light regions.

Then it was our turn. 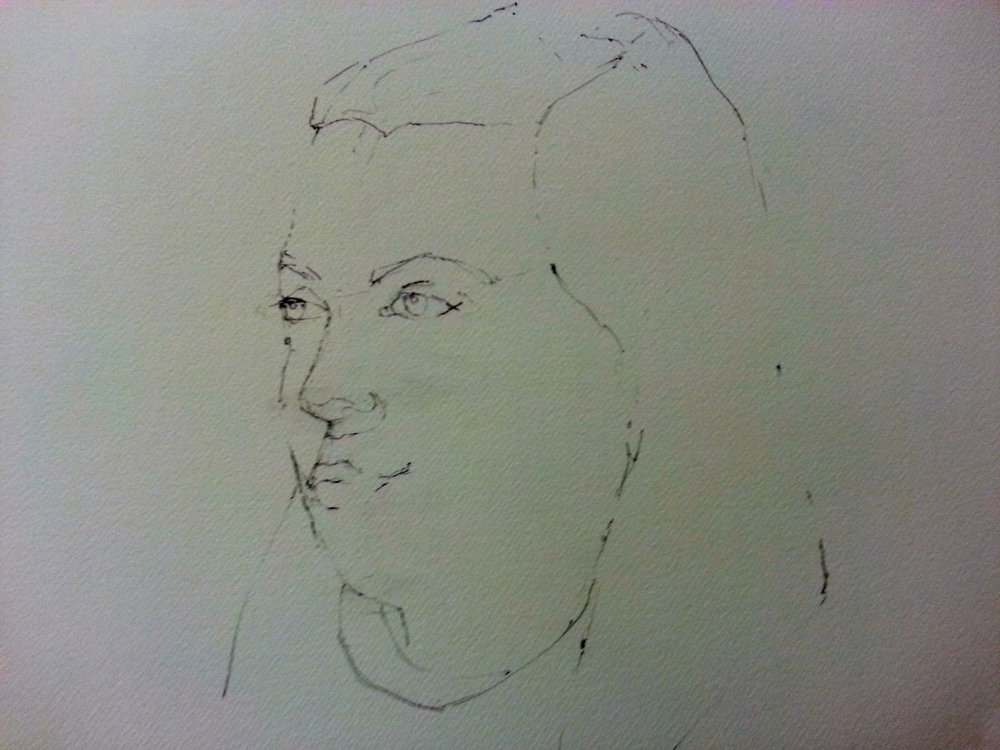 After lunch an extra model arrived and half of us sat in front of her and half in front of Katrina again.   I chose Katrina as I wanted to put into practice the advice Charles had given us in the morning.   I took the first twenty minutes to do the drawing.   I felt reasonably happy at this stage.
Oh and Charles’ comment  – ‘Good drawing’. 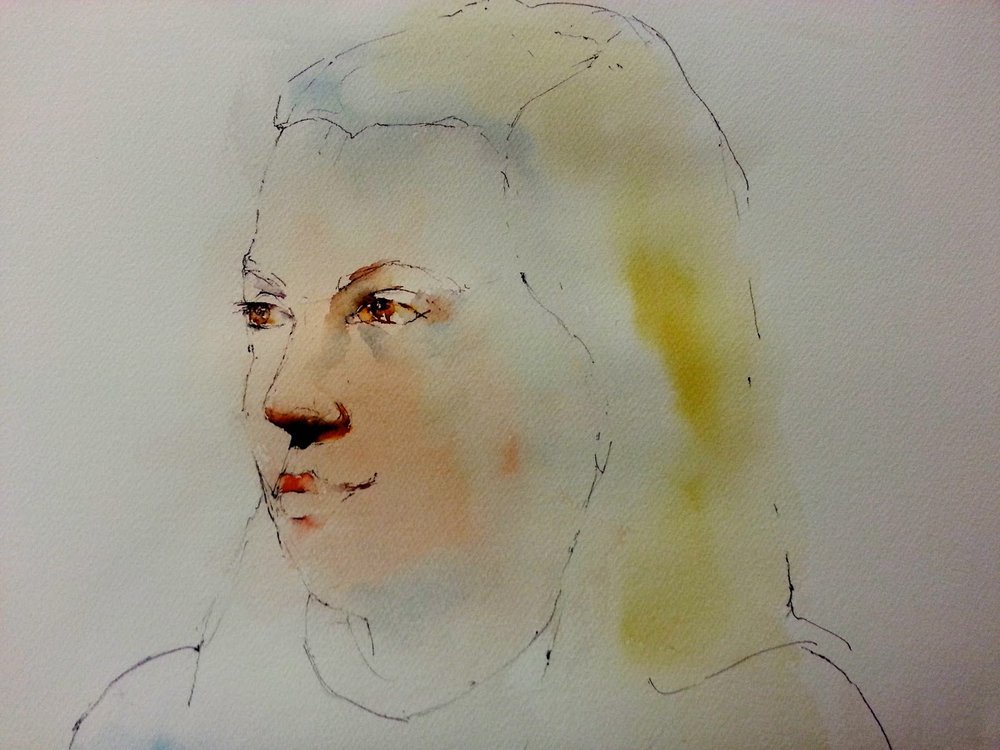 After the underwashes as he had done it was time to start on the features.    I felt that I was working extremely tentatively and would have liked some stronger color but the features came out pretty well. 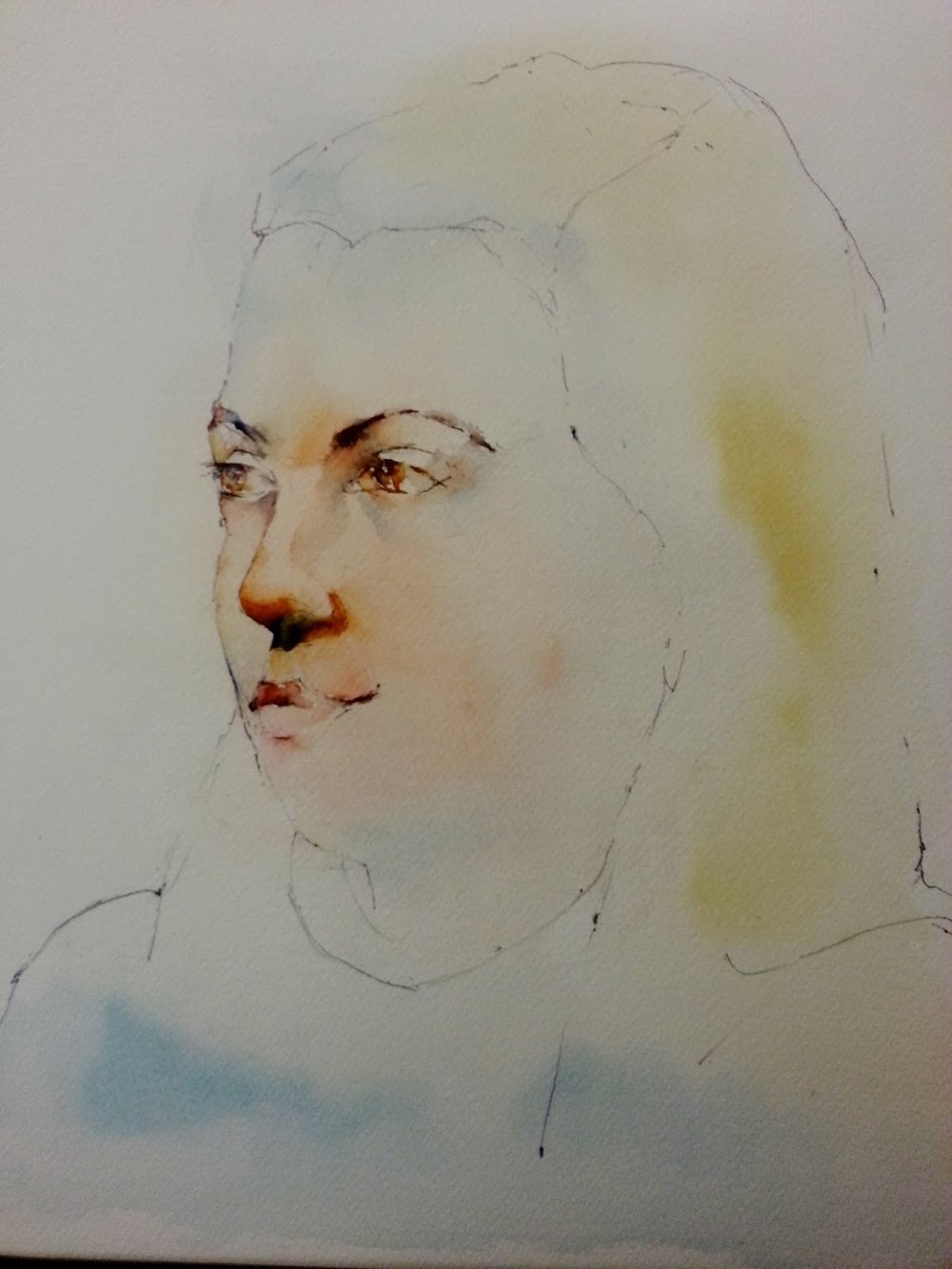 It’s probably hard to tell the difference between this and the previous version.  I was getting a bit jittery and didn’t want to muck anything up.  I did strengthen and warm up the shadow underneath the nose as well as add some subtle washes to give form to the nose and brow area.   I was pretty happy with the eyes – I tried to follow Charles’ advice to put the iris in with dots and leave white space.   I think it works well.

At the previous stage Charles came round and said that I should leave it pretty much as it was.   I should leave out the hair and sweater and even the shadow on the side of the face.  He did suggest putting some color into the cheeks and calling it finished.  Which I did. 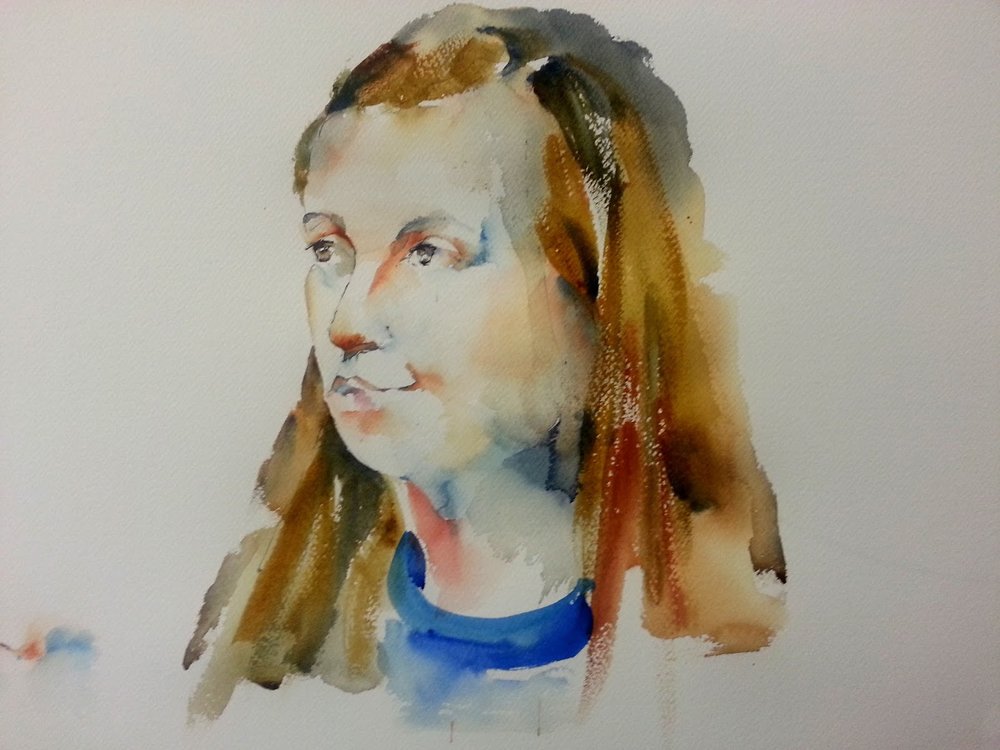 I was then at a bit of a loose end and there was about an hour to go so I started a fresh painting aiming to put in some bolder color and have a go at the hair.    For a quick rendition I was pretty happy.

So that was day one.    I enjoyed every minute of it. 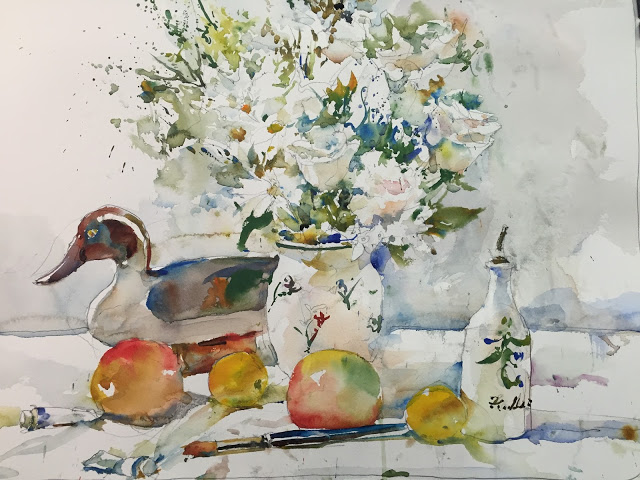 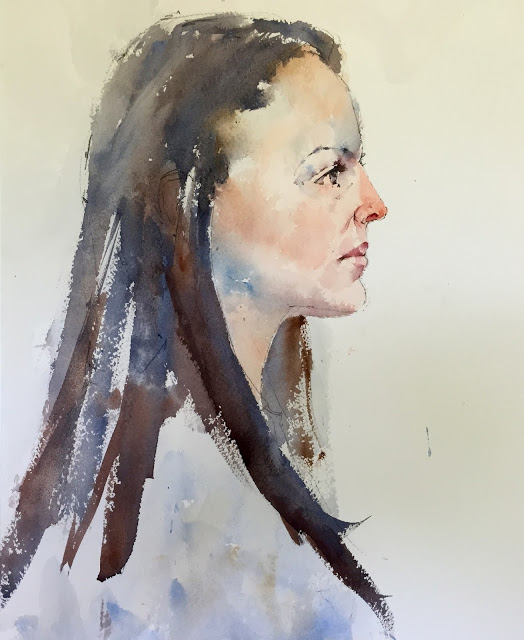 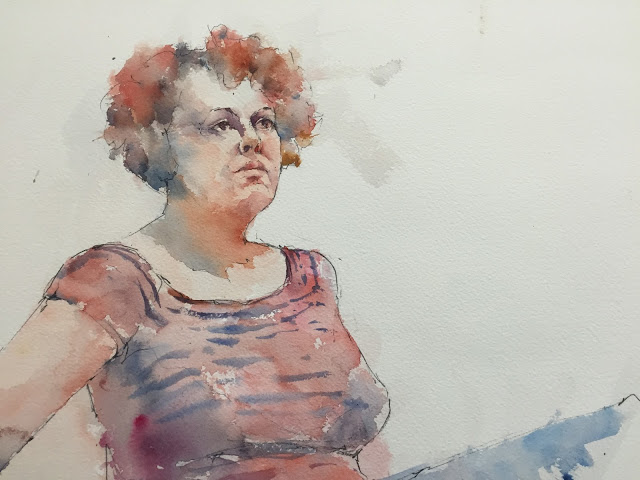